Republicans have momentum going into the midterm elections, but the Democrats' concessions are just as much to blame for the rightward drift of mainstream politics.

IN THE run-up to the midterm elections, Democrats were filling e-mail inboxes to the brim with messages that ranged from panicky to pleading. The subject lines revealed the desperation of the Democratic establishment as it tried to drum up money and support: "heartbreaking shame," "deep trouble," "devastating loss," "Terrible News," "we're BEGGING," "begging...BEGGING," "kiss any hope goodbye."

If nothing else, the daily--sometimes hourly--cyberspace freak-outs from their various campaigns served to illustrate the Democrats' central, relentless, numbing message for these elections. It had nothing to do with celebrating the party's successes--because there are none. All the Democrats have to offer their supporters on Election Day is abject fear about the consequences of a Republican victory.

No one can predict the scale, of course, but as of the morning of Election Day, it seems all but certain that the Republicans will be able to declare victory. The question is how big their gains will be--including whether, as seems more likely than not to judge from opinion polls, the GOP can win control of the U.S. Senate. 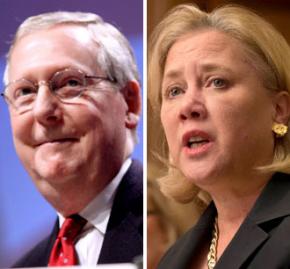 If that happens, get ready for a tide of commentary about how the U.S. really is a conservative country after all, and the Republicans have a mandate--no matter how meager the turnout is for the elections--to do pretty much anything they want. For certain, that will be the message of Republicans themselves, along with their right-wing echo chambers at Fox News and the like.

Nothing of the sort is true, of course. This year, establishment Republicans managed to defeat most primary challenges by the fanatics of the Tea Party, but they did so by adopting the reactionaries' political agenda. Though they may not always advertise it in campaign speeches, the Republican candidates expected to win today have right-wing positions--on issues like corporate tax breaks, Social Security privatization and the like--that are deeply unpopular.

It's no wonder that only 29 percent of people have a positive view of congressional Republicans, compared to 47 percent with a negative view. But the GOP is riding a single theme toward victory in the elections: their opposition to the presidency of Barack Obama.

THUS, THE real question isn't how the Republicans ran away with this year's elections. It's how Barack Obama and the Democrats gave away their huge political advantage from the last two presidential election years.

In 2008, Obama won the White House amid a political sea change after eight years of George Bush and the Republicans. Expectations for Obama's presidency were sky high. Meanwhile, Democrats were in charge in Congress and confident they would stay there. Even in 2012, while enthusiasm for the Democrats was more muted, Obama won easy re-election against a Republican candidate who was the personification of how out of touch the GOP was.

That was then, and this is now. In an ABC News/Washington Post poll released on the eve of the election, Obama's favorability hit a career low of 44 percent, compared to 60 percent at the start of his term in 2013 and 49 percent at the start of this year. Democrats in Congress also have record-low approval ratings, though the Republicans are even more widely despised.

So what happened? The answer is simple: The presidential candidate with the slogan "Yes We Can" is now a one-and-a-half term president with a record of "No We Didn't and Still Won't."

Instead of appealing to the people who swept Obama into office on a wave of hope and optimism--the people who supported health care for all or an increase in the minimum wage--the Democrats tailored their proposals and policies for Corporate America. Instead of confronting the Tea-Partying Republicans and exposing them as out of step with public opinion on most issues, the Democrats caved and conceded on one question after another.

The net result was that mainstream politics was dragged further and further to the right, toward the Tea Party maniacs--even with a "liberal" Democrat in the White House and total control over Congress for two years of his presidency.

One stark illustration of how this has affected the Democratic Party base: According to the latest ABC News/Washington Post poll, the biggest decline in Obama's favorability rating this year came among Latinos--a 19 point drop since the start of the year.

Latinos were a critical part of the big turnout for Obama in 2012, in large part because Obama promised to pursue legislation for "comprehensive immigration reform." After their drubbing in the election, it seemed certain that Republicans would allow a bipartisan compromise--far too weighted to border security and punitive measures to suit immigrant rights advocates--to pass. But the House GOP blocked the legislation anyway.

In the spring, Obama promised, to much fanfare, that he would issue executive orders to implement the main provisions of the blocked immigration bill--including a long-awaited moratorium on deportations of undocumented immigrants with children born in the U.S. But by the end of the summer, Obama had gone back on his word once again, announcing that he wouldn't take action until after the elections. The anti-immigrant racists won the day once more--because of Obama's surrender on an issue where he has plenty of support.

Barack Obama not only didn't live up to the high expectations for his presidency. He crushed them.

THE TRUTH is that this is the inevitable outcome for a pro-business party that represents the status quo in Washington.

It's a time-tested rule of the U.S. political system: Democrats running for any office of significance say one thing to the majority of people to win their votes--while doing another to serve Corporate America. Broken promises and dashed expectations are par for the course.

Still, one thing that's striking about this particular election year is how little the Democrats think they have to say to their supporters to win their votes.

Take the issue of racism. Six years after the election of the first Black president, discrimination and inequality are every bit as much a part of the fabric of U.S. society as ever. Not only that, but the first Black president has said as little as possible about racism and the African American community--even as issues like racial profiling, police violence and the criminalization of Black youth brought the question into the national spotlight.

Events like the murders of Mike Brown and Trayvon Martin, as well as the tide of protest that followed both, have permanently changed the way large numbers of people think about the issue of racism and police violence. But the Obama administration and Black Democrats in Congress have said little and done less.

Nevertheless, leading Black political figures like Rev. Al Sharpton--not to mention Obama himself--don't hesitate to chastise Black people about the need to get out and vote. In a recent appearance on Sharpton's radio show, the president downplayed the problem of new restrictive voter ID laws that have the effect of limiting Blacks' right to vote. The real problem, Obama said, was Black apathy:

Most of these laws are not preventing the overwhelming majority of folks who don't vote from voting...The reason we don't vote is because people have been fed this notion that somehow it's not going to make a difference. It makes a huge difference. The fact of the matter is that we've now had four years of a Republican House of Representatives because in 2010, Democrats didn't vote and Republicans did.

In other words, it's your fault if the Republicans win. And if you're dissatisfied with how little Democrats are doing, keep it to yourself, because things could always get worse.

The Democratic Party relies on the support of Black voters at election time, but it doesn't do anything to deserve that support. The Democrats may pose as the party concerned about racism and inequality, but they are just as likely as Republicans to view the issue through the lens of cynical political calculation, not principle. So in some races, Democrats used the issue of Ferguson and police racism to try to pressure Black voters to go to the polls, while in other races, the "party of the people" was silent on the issue, out of fear that saying something could alienate white voters.

VOTER TURNOUT is always lower for midterm elections than presidential years, and historically, the party of a sitting president has a hard time in these elections. Both these factors are advantages for the Republicans. But that alone can't explain the lack of enthusiasm about this election--and in particular, the lack of enthusiasm about the Democrats.

With Obama's popularity sunk to new lows, Democrats running for Senate and House seats told the White House that they didn't want the president coming around their campaigns. Kentucky Senate candidate Alison Lundergan Grimes even refused to answer a question about whether she voted for Obama.

As SocialistWorker.org wrote in our editorial yesterday, there are a few races and ballot measures where voters can send a message by supporting independent left candidates and progressive referendums.

But overwhelmingly, the choice in the 2014 elections is between Republicans, where the ideas of the Tea Party predominate, if not the Tea Partiers themselves--and the Democrats, whose candidates generally try to position themselves just to the left of their opponents, if not to their right.

This points to the real conclusion we should draw about the 2014 election--not that the Republicans won the day over the Democrats, but that the U.S. political system as a whole is rigged to work against the interests of working people. We need an alternative to the two-party duopoly--and it will need to come from outside the Washington system.