From hope to nope

The Republicans' election success guarantees that there will be more struggles ahead.

THE RESULTS of the November 4 elections didn't leave much in doubt about the horse race between the two mainstream parties.

The Republicans won. And the Democrats lost.

Out of 36 U.S. Senate races, Republicans captured formerly Democratic seats in as many as one-quarter of them, giving them the majority. The GOP added seats in the House of Representatives, where it now has its strongest majority since the 1940s. Republicans had a net gain in governor's races and will have total control in at least 29 state legislatures, their largest share since the 1920s. The Democrats will have full political control in fewer state governments than at any point since the Civil War.

There was one seeming exception to the Republican tidal wave, though--many of the referendums at stake in Election 2014 went in a progressive direction, even in states where the GOP won big. For example, voters approved ballot measures mandating a higher minimum wage in four states where Republican candidates won the elections for governor. 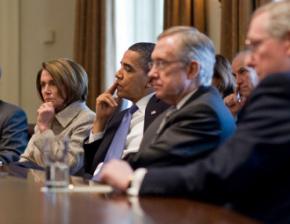 But there's an explanation for this seeming inconsistency. The outcome of voting on referendums did reflect a continuing leftward trend in public opinion on many--though not all--economic and social issues. But millions of people who were once enthusiastic that Barack Obama and the Democrats would act on that trend and take action have lost faith that they will. And so they stayed home on Election Day.

Hope has turned to nope.

With turnout hitting a 72-year low for national elections, the older and whiter electorate that actually cast a ballot in the midterm elections was more inclined toward Republicans than ever--and so they voted for their candidates, even as a significant number took the liberal side on ballot measures.

IF THE media had focused more on the little-noticed referendums, the conventional wisdom about Election 2014 would have been different.

Four initiatives requiring paid sick leave also passed on November 4, making it three states and 16 cities that have now passed some kind of paid sick leave law. One of those states is Massachusetts, where voters put Republican businessman Charlie Baker in the governor's mansion.

In Illinois, another nonbinding ballot measure in favor of a 3 percent "millionaire's tax" on residents with incomes over $1 million passed by a 26-point margin. The state's new governor is a billionaire, rather than a millionaire, so the tax isn't likely to see the light of day. But the strong vote in favor was another sign of public support for making the wealthy pay to support underfunded schools and other public services.

On other referendum issues, voters showed their support for social policies typically considered left wing--such as measures to legalize recreational marijuana use in Alaska, Oregon and Washington, D.C., and an initiative in California that reclassified some low-level, nonviolent crimes from felonies to misdemeanors. Hundreds of prisoners have already been freed from incarceration in California as a result of Proposition 47.

These votes reflect shifting attitudes about the criminalization of drug users and growing awareness of the failure of the racist "war on drugs," with its focus on punishment and increased policing. Unlike the tough-on-crime policies that predominate in both the Republican and Democratic Parties, these initiatives reflect people's actual experiences and opinions.

The impact of the environmental movement was felt in several initiatives against the energy industry's fracking bonanza. In Denton, Texas, environmental activists got a ban against hydraulic fracturing for natural gas on the ballot, and some 59 percent of voters approved it--in a state where corporate oil and gas interests ordinarily rule the roost.

On the question of abortion, an anti-choice measure did pass in Tennessee. But two so-called "personhood" initiatives to give rights to fetuses failed miserably in Colorado and North Dakota.

The assault on women's reproductive rights is continuing, but many people clearly reject anti-women measures when they come in the brazen form of Colorado's Amendment 67, which could have made it possible to prosecute women who had miscarriages. Exit polls provided another glimpse of public opinion that stands in contrast to the anti-choice offensive: 53 percent of people said they supported legal abortion, compared to 43 percent who opposed it.

THE OUTCOME of these ballot initiatives show that Election 2014 wasn't a warm embrace of Republican policies, but a cold shoulder to the Democrats. They highlight the wide disconnect between the issues that voters care about and the narrow political options they are offered in campaigns for political office.

It's true that the Democrats' drubbing was a byproduct of the declining popularity of Barack Obama and congressional Democrats--both have hit new lows in popularity this fall. As a consequence, some "swing" voters in the political center of the electorate probably switched over to voting Republican.

But more important still was the number of Democratic base voters who stayed home. According to ABC News opinion poll specialist Gary Langer: "Young adults, a Democratic mainstay, accounted for just 13 percent of voters this year, down from 19 percent in 2012. Those who did participate, moreover, supported Democrats only by 54-43 percent, down from a 60-38 percent margin in their House vote two years ago."

Nonwhite voters, who make up a growing share of the voting-age population, turned out in lower numbers. Meanwhile, some 37 percent of people who voted in this election were over 60 years old--one of the largest voter age gaps in recent midterm elections.

In the exit poll survey of voters after they cast their ballots, an overarching theme was frustration with both parties. According to Langer, 54 percent of voters said they had an unfavorable opinion of the Republican Party, but an equal proportion viewed Democrats the same way.

The exit polls reflected the same pessimism about the economy and society that non-election opinion surveys have been showing for years. For example, according to ABC News, half of voters said they expected life for the next generation to be worse than it has been for them--the worst outcome since ABC started asking the question 20 years ago.

So the problem was not--as Barack Obama claimed after Election Day--that the Democrats haven't been successful in touting their achievements with a recovering economy. It's that most working people--including, and maybe especially, those who are the Democrats' most loyal supporters--know those "achievements" mean nothing for them.

Meanwhile, this was the most expensive midterm election in U.S. history, according to the Center for Responsive Politics. The roughly $4 billion spent on Election 2014 also came from a smaller number of people than before--including "dark money" from right-wing ideologues like the Koch Brothers, who use campaign finance laws written to help them avoid the public eye.

Still, all this is business as usual, since big money regularly buys the ear of politicians on both sides of the aisle.

WHAT THIS election showed more than anything else is the huge gap between the concerns of working-class America and the meager choices available from official Washington politics. When the Democrats and Republicans have so little to offer working people, is it any wonder that they don't turn out to vote--despite the pleas from liberals about the necessity of stopping the Republican fanatics?

The votes on referendums show what's possible when policies that could actually change people's lives are on the table. And when real electoral alternatives were on offer, voters were inspired by them. In New York state, bitter frustration with Democratic Gov. Andrew Cuomo led to a strong vote for the Green Party ticket of Howie Hawkins and Brian Jones.

Still, in a post-election analysis, Jones pointed out a telling statistic: the last statewide opinion poll gave Hawkins-Jones 9 percent of the vote in the governor's race--yet 80 percent of voters had never heard of them and the alternative they represented.

This points to the importance of starting now to build an independent left alternative in the U.S. The opportunities to do so are by no means confined to elections. They exist in the grassroots campaigns around workplace struggles and community fightbacks--from the battle of low-wage workers for a living wage and union rights, to the struggle against racism and police violence in Ferguson, Mo., to the campaigns against corporate school "reform" and for immigrant rights, to the campus organizing against sexual assault.

The Republicans' success in the 2014 elections guarantees that there will be more struggles ahead as the right wing pushes its reactionary agenda--struggles to stop the Keystone XL pipeline, to resist anti-immigrant policies, to push back proposals to lower corporate taxes and cut Social Security.

If the Republicans' victory guarantees that, the Democrats' continuing failures show something else: we need a struggle from below, independent of the mainstream political system, to fight those struggles.