Tsipras’ Pyrrhic victory and the struggle ahead

Alexis Tsipras' SYRIZA won a resounding victory in general elections on September 20, winning nearly as many seats in parliament as it did in the January 2015 election that first brought it to power. The strong showing came despite Tsipras negotiating another so-called Memorandum of harsh austerity measures demanded by the European governments and financial institutions in return for bailing out the ailing Greek financial system.

To ratify the new austerity program that SYRIZA was elected to reverse, Tsipras needed the support of pro-austerity parties, including the center-right New Democracy and the center-left PASOK, which led the governments that agreed to previous Memorandums. In the final vote last month, nearly 40 SYRIZA members of parliament opposed Tsipras' capitulation to the blackmailers. When Tsipras resigned to trigger new elections, this parliamentary opposition became the core of a new left alliance, named Popular Unity, which scrambled to put together a campaign for the vote held just four weeks later. Popular Unity fell just short of the 3 percent of the vote needed to qualify for seats in parliament.

The Internationalist Workers Left (DEA, by its initials in Greek) was a co-founding organization of SYRIZA and a main voice in the Left Platform within SYRIZA. Now, it is participating in the new left challenge of Popular Unity. This statement published after the election responds to the outcome and looks at the tasks for the left ahead.

1. The elections of September 20 were an initiative of Alexis Tsipras, who aimed to achieve two goals:

a) To confirm the balance of political forces and reestablish the viability of the SYRIZA-led government before the workers and popular classes realize through their own bitter experience the actual content of the agreement that was signed with the creditors on July 13.

In this effort, the leadership of SYRIZA was fully supported by the European leaders. That was made clear by the emblematic statement of German Chancellor Angela Merkel that the elections are "part of the solution and not a part of the crisis." SYRIZA leaders also had the support of the vast majority of the mass media in Greece, which played a decisive role in organizing and promoting a pre-electoral public discussion where there was almost complete silence on the issue of the new Memorandum--which is the main issue of the political struggle!

b) The second goal of Alexis Tsipras was the purging of the left wing of his party, even if the price that he had to pay for that was the organizational disintegration of SYRIZA. In this goal, Tsipras was again supported fully by the bourgeois mass media, which slandered the Left Platform ruthlessly, while hiding the extent of the wave of resignations and withdrawals of a huge number of activists who had built SYRIZA all those years--among them, the secretary of the party, half of the elected members of the Political Secretariat, a big part of the members of the Central Committee, and leading cadre from lots of local and working-place branches. 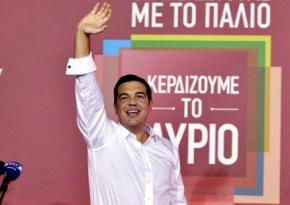 SYRIZA, as a united political formation of the radical left, has today been replaced by a party completely built around its leader, based on some ambiguous and unstated "relationship" between the prime minister and his followers.

2. The main precondition for the success of the SYRIZA leadership's strategy was the spreading disappointment and weariness among the people who were active in the social movements, including SYRIZA's base of political support.

That was the point and the goal of the "There Was No Alternative" argument to justify the new Memorandum. This message was repeated constantly, like a mantra, by leading members of SYRIZA, along with the five-party coalition--including SYRIZA, New Democracy, PASOK, the Independent Greeks and Potami--that was built in parliament around the consensus to ratify the new shameful Memorandum signed on July 13.

The result of this policy was unprecedented abstention from the elections on September 20. There were 800,000 fewer voters from January 2015. The "Americanization" of political life [meaning a high abstention rate, with a significant part of the electorate feeling alienated from the existing political parties and indifferent to politics--translator's note] is now a visible threat. Tragically, this threat is a result--and a tool--of the actions of a government that claims to represent...the radical left.

If we add to this the fact that the grotesque Union of Centrists, led by Vasilis Leventis [a trash TV personality who uses his television station to attack politicians with ugly and offensive language, and who for more than 20 years was an object of derision, winning just a few thousand votes at a time--translator's note], we must be alarmed by another looming danger: the disappointment produced by SYRIZA could translate into a level of political apathy or cynicism never experienced in history in Greece.

The background of this retreat of the hopes and expectations of the people who were active in the social movements and the left is the retreat of the mass struggle, after the period of 2010-12 and an increase in illusions that we can challenge austerity through electoral means only.

Against this backdrop, the complete reversal of the political message of the referendum--when the massive "no" vote of the working class on July 5 was turned into a shameless "yes" on July 6 after the conference of the leaders of mainstream political parties, including SYRIZA, and the signing of the new Memorandum by Alexis Tsipras a week later--marked a change in the political mood and--at least temporarily--in mass consciousness. A large part of the population, seeing that the anti-austerity project of SYRIZA was collapsing, started to believe that the overthrow of the Memorandum is impossible. It has started to accept that trying to implement Memorandum policies "with a human face" is the only realistic alternative.

It was this retreat, along with the recent memory of the ferocity of the politics of New Democracy and PASOK while in control of the government, that produced the political and electoral victory of Alexis Tsipras on September 20.

3. This is a Pyrrhic victory. The government of Tsipras will be obliged to immediately implement the anti-worker, anti-popular "reforms" of the new Memorandum, starting in October. The dissolution of the Social Security system, an unprecedented tax assault on the lower classes and a massive wave of privatizations is coming. The lies about seeking equivalent measures that would protect the poor from the consequences of the policies dictated by the Memorandum were helpful during the election campaign before the vote, but they are now about to end.

At this point, the leading group around Alexis Tsipras will face reality--they will have to face the content of the agreement they have signed. That is why--despite all their celebrations about their ability to form a "stable" government with the Independent Greeks as a junior partner--they have already paved the way for a future alliance with PASOK and the scenarios for an even broader government of "national unity" involving New Democracy are not off the table.

Facing this prospect, our only possible response is the struggle from below: Strikes, demonstrations, occupations and more to defend workers' rights and social rights. In order to crack the image of the SYRIZA government's popular legitimacy created by the electoral result on September 20, these struggles must be decisively supported by activists of the left.

Recent experience shows us that in order for such struggles to prevail, they will need a political expression. They must coalesce around a political current that aims to organize a challenge to austerity. In this, the section of the left that resisted and stood against the maneuvers of Tsipras has very special tasks.

4. A big part of this responsibility lies on the shoulders of Popular Unity--the united front political formation created by a large part of the left wing of SYRIZA and by organizations and activists of the anti-capitalist left.

Popular Unity was defeated in the September 20 election. It won 2.9 percent of the vote. By only a small number of votes, it failed to reach the 3 percent threshold to have representatives in parliament.

There are objective reasons for our defeat. We had only a month's time to create a new political formation and simultaneously organize an electoral campaign on a national level, with no funds at all to begin with. The chances of a failure were always big from the beginning.

But there were important subjective, political mistakes as well. Faced with the pressure from our political opponents, who argued that obedience to the European leadership is obligatory, we overemphasized support for an exit from the eurozone. At some point, this necessary part of our overall argument was singled out and raised above a more general program of organizing a united class movement against austerity and an anti-capitalist program towards socialist emancipation. That was a gift to Tsipras and the mass media, who looked for every opportunity to slander us as "drachma left."

Despite all this, Popular Unity received 152,000 voters, and it has already rallied an organized layer of thousands of activists and experienced veterans of the working-class movement and the left. This gives us the strength, despite losing the first battle, to engage in the war that is coming.

Of course, for this to happen, we need to resolve, in an effective and democratic way, all the organizational, political and programmatic questions about Popular Unity that were naturally left aside during the brief period before the elections.

5. The Communist Party raised its percentage marginally, from 5.47 percent in January 2015 to 5.59 percent this time. But the fact that this happened in a situation where SYRIZA was in crisis and split, and after Tsipras had just signed a new Memorandum of harsh austerity, shows that there is no cause for celebration. The politics of the leadership of the KKE failed to capitalize on a rare opportunity.

During the pre-election period, the KKE aimed its attacks almost exclusively against Popular Unity, in the hopes of claiming all votes of left-wing opposition to SYRIZA for itself. This tactic leaves all the promises on the front page of the party's newspaper about initiatives to form some sort of popular alliance in doubt.

6. The smaller anti-capitalist alliance ANTARSYA also raised its percentage of the vote marginally, from 0.64 percent in January to 0.85 percent this time. In its statement after the elections, the New Left Current (NAR), one of the main components of ANTARSYA, set as its goal "a broad militant front to overthrow the coming storm of anti-worker measures...the commitment to joint action from all the parts of the militant left, including the Communist Party and Popular Unity."

The problem is that this statement was issued a day after the election and not three weeks before it. In the electoral battle of September 2015, the "forces of the militant left" failed to provide a common response, which was necessary.

7. The Nazi Golden Dawn came in third place, winning 6.95 percent of the vote. The increase of its percentage happened because of the level of abstention: In reality, it lost 9,000 votes since January 2015. But even the fact that it has stabilized its electoral support –just a few days after its leader publicly took "political responsibility" for the murder of Pavlos Fyssas--shows the danger. Our struggle to reverse austerity, our fight against the Memorandum, is the only way to smash not only the capitalist greed, but also the fascist threat.