Can the U.S. escape the slump?

Lee Sustar looks at the prospects for the U.S. economy amid global instability.

THE U.S. economy is still faring better than its rivals among the established industrial powers--but there are signs that the weak economic recovery since the Great Recession is past its peak.

Around the world, there are signs of a world economic slowdown fueling social crisis, political polarization and military conflict. Yet in the U.S., unemployment fell to 4.9 percent for January--the lowest level since 2008.

Nevertheless, overall U.S. economic growth in the last three months of 2015 slowed to just 0.7 percent at an annualized rate--"anemic" in the words of the Wall Street Journal--suggesting that the slowdown in the global economy could be dragging the U.S. down, too.

For the year gone by, U.S. gross domestic product (GDP)--the broadest measure of economic output, encompassing all goods and services produced--came in at 2.4 percent. That may look good compared to, say, Brazil, where a plummeting economy fell by 3.7 percent in 2015--or to the 28-country European Union (EU), which registered overall GDP growth of 1.9 percent for the year. 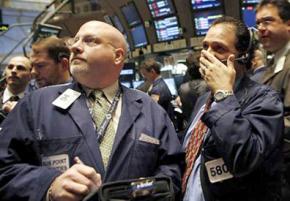 But the overall rate of growth in the U.S. economy since the 2007-09 recession has averaged around 2 percent, compared to a 3 percent annual average in recovery periods since the end of the Second World War--a performance that the business magazine Fortune called "miserable."

That lousy performance has mainstream economists like former Treasury Secretary Lawrence Summers sounding the alarm about what he calls "secular stagnation"--chronic low growth for the U.S. economy with no end in sight. In November, Summers--a onetime champion of financial deregulation and all manner of neoliberal policies--had changed his tune to the extent that he titled a blog post "Advanced economies are so sick we need a new way to think about them."

EVEN THE most positive story in U.S. economic news--the official unemployment rate, which reached 10 percent in October 2009, and now stands at less than half that--doesn't look so good on closer examination.

The broadest figure for joblessness, which counts all those of working age who have given up looking for a job--stands at 9.9 percent. And labor force participation rate is 62.7 percent, up slightly from a 38-year-low reached in September 2015, more than six years into the economic recovery. The meaning of that statistic is simply that the percentage of the working-age population that has a job is still at historical lows.

As usual, people of color fare worst in the U.S. labor market, with African Americans enduring an official jobless rate of 8.8 percent and Latino unemployment at 5.9 percent. And we know the number of uncounted unemployed and the ranks of the underemployed--those who can't find full-time work--is significantly higher.

Added to this misery is the wage situation: paychecks aren't even keeping pace with the low rate of inflation. This has contributed to growing inequality that has now reached levels last seen in the 1920s, before the rise of the New Deal social programs of the 1930s.

Another factor: Spending by the government at every level--federal, state and local--hasn't recovered to its pre-Great Recession levels as a share of overall U.S. investment, which is creating another drag on the economy.

With poor employment prospects during the recession, millions of people turned to higher education to try to improve their job prospects. As a result, outstanding student loans more than doubled since the recession to an astounding $1.2 trillion, a growth rate of $2,726.27 per second. With the predominance of low-wage, no-benefit jobs in the "gig economy," those debts are increasingly difficult to pay back--and by law, they can't be overcome through bankruptcy.

So even as the U.S. faces a growing likelihood of a recession in the months ahead, the working class majority is still suffering the aftereffects of the last slump.

NO ONE can predict when or how the next recession will take shape in the U.S. What is clear is that the world economy has already moved into a sharp slowdown. The problem is centered in China, which accounted for around half of all growth in the world economy a few years back.

China was able to avoid the worst of the 2007-09 recession through a big economic stimulus program--twice as big, in proportion to its economy, as those in the U.S. and in Europe. The big spending, along with central banks slashing interest rates to practically nothing, put a floor under the world economy.

But this didn't cure the fundamental problem of the slump--an overproduction of commodities and the factories that produce them. The glut internationally pushed down prices and profits, particularly in Japan.

As in similar capitalist crises, the problem isn't the production of more goods and services than people want--there remains a crying need around the world for the most basic industrial products--but more products than can be sold at a profit.

In Europe, a lurch toward austerity kept EU economies stagnant at best, and contracting at worst. The U.S. did better by sticking with stimulus longer before the federal budget squeeze in the "sequester" deal between President Barack Obama and the Republican Congress. Meanwhile, the booming economy in China was pulling in imports from around the world, from sophisticated machinery from the U.S., Europe and Japan to oil and raw materials from Latin America, Africa and other parts of Asia.

Behind this growth, however, was an expansion of debt on a global scale. With China's slowdown, that country's banking system--and the unregulated shadow banking system tied to it--is under enormous stress as companies that depended on a continued growth of exports are hit with falling prices.

The Chinese government tried to overcome this reliance on exports by boosting consumer markets for the new middle class. But such a shift would require much longer to develop, and at any rate, the policies failed to stop the slowdown.

The decline in China's economic growth from 14 percent to half that rate has caused chaos in economies dependent on oil and raw materials, shattering government budgets and driving up unemployment rates. The impact is being felt as well in the U.S., where energy companies have boomed since the Great Recession. Now, U.S. banks, which plowed big money into fracking and shale oil, are taking a hit as loans go bad, and this has led to big drops in their stock prices.

The selloff of bank stocks is global, too, as investors worry that European and Asian banks are exposed to Chinese corporate debt. Europe's banks, moreover, remain caught up in the Eurozone's unresolved sovereign debt crisis, with Greece as merely the most extreme example. Deutsche Bank, the massive German institution, has seen its stock hammered amid speculation that it could need a bailout, as in 2008.

All this could trip up the U.S. economy. While U.S. consumers are saving money from cheaper gas, the collapse in oil prices worldwide will remove a big source of capital spending, squeezing economic growth.

There are other pressures, too: the attempt to devalue currencies by governments and central banks such as China, Japan, Brazil and other countries will lead to the dollar rising on world currency markets. That makes U.S. exports more expensive overseas, which will hit U.S. exports and economic growth.

For these reasons, economists like Larry Summers and Paul Krugman are calling for a massive new wave of government spending on infrastructure and public works in an attempt to spur economic growth and pull people back into the labor market. This remains is a minority view in the mainstream.

Still, the obvious contradictions and weaknesses of the U.S. economy have opened up a discussion--in the form of the Bernie Sanders presidential campaign--of a socialist critique of capitalism.

The next U.S. recession--whenever it comes--will create an even bigger space to discuss the crisis of contemporary capitalism and the possibility of building a socialist economy based on workers control and meeting human needs.