With socialists at Columbia University in New York City under fire for showing solidarity with Palestine, Dorian Bon makes the case for standing with an anti-colonial rebellion.

THE GLOBAL crackdown on free speech in solidarity with Palestine is being felt at Columbia University in New York City.

In early February, the Barnard Columbia Socialists issued a statement in support of Students for Justice in Palestine and Jewish Voice for Peace after the two groups launched a new campaign for boycott, divestment and sanctions (BDS) against Israeli apartheid. Our statement ended with the popular Palestinian chant "Long live the Intifada!"

Since that time, campus-based pro-Israel organizations like Aryeh: Columbia Students Association for Israel and the Israel on Campus Coalition have mobilized their members to attack us for daring to support the Palestinian Intifada, the popular struggle of hundreds of thousands of Palestinian people acting in civil disobedience against occupation and apartheid.

These influential student organizations, well connected to the international pro-Israel lobby that seeks to demonize Palestinians and their supporters all over the world, are determined to smear student activists sympathetic towards the Palestinian people, even if it means resorting to such base tactics as fear-mongering, manipulation and intrigue. One student, writing for the Columbia University Spectator, stooped so low as to suggest the word Intifada is defined as "armed uprising," and that our use of this term amounted to "a call for violence that targets civilians." 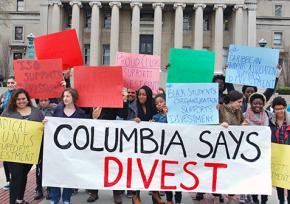 This is patently false and a slander against all those who stand with the Palestinian struggle for justice and equal rights. First, the Arabic word "intifada" doesn't mean "armed uprising." It means to "shudder" or "shake off"--as in to "shake off" Israel's occupation of Palestinian land.

Second, the call for Intifada is a call for mass civil disobedience, not "violence that targets civilians." The chief tactics employed by both the First Intifada and the Second Intifada, which began in 1987 and 2000 respectively, were mass marches, strikes by workers, the withholding of taxes from the occupiers, mass acts of civil disobedience and the building of grassroots institutions of mutual aid and support to sustain the mass movement in the streets.

It was Israel's attempt to repress these revolts against its illegal occupation that led to a militarization of the conflict--an outcome that Israel sought in order to undercut the mass character of these uprisings. In fact, Israel has injured, maimed and killed far more Palestinians over the years than vice versa, as statistics compiled by the Israeli human rights organization B'Tselem amply illustrate.

Attend a forum on "BDS and the Attack on Free Speech at Columbia," sponsored by the Barnard-Columbia Socialists. Thursday, March 10 at 8pm, 302 Hamilton Hall, Columbia University, 116th Street and Broadway.

THE ATTEMPT to rewrite history and smear pro-Palestine activists, as the Spectator article aims to do, is shocking but hardly surprising. A recent report by the Center for Constitutional Rights titled "The Palestine Exception to Free Speech: A Movement Under Attack in the U.S." has carefully documented the underlying strategy of these pro-Israel groups. According to the report:

Fearful of a shift in domestic public opinion, Israel's fiercest defenders in the United States--a network of advocacy organizations, public relations firms, and think tanks--have intensified their efforts to stifle criticism of Israeli government policies. Rather than engage such criticism on its merits, these groups leverage their significant resources and lobbying power to pressure universities, government actors, and other institutions to censor or punish advocacy in support of Palestinian rights...

The tactics used to silence advocacy for Palestinian rights frequently follow recognizable patterns. Activists and their protected speech are routinely maligned as uncivil, divisive, anti-Semitic, or supportive of terrorism.

The irony at the heart of these attempts to carve out a "Palestine exception to free speech" is that the "threat" to which pro-Israel groups are responding are activist efforts to draw attention to Israel's violation of Palestinian human and civil rights by divesting from corporations profiting from Israel's illegal occupation and boycotting academic and cultural institutions that justify or whitewash such Israel's denials of Palestinian rights. Thus, the BDS movement is the epitome of a nonviolent movement.

The purpose of BDS campaigns is to present substantive, political ideas in order to transform the terms of the debate about Israel and Palestine in the United States--as part of a broader commitment to fighting oppression in all of its forms. To that end, a deeper look at the history of Palestinian resistance to Israeli occupation would help clarify the issues at stake.

TO PRO-ISRAEL student groups at Columbia, the two great Palestinian uprisings from 1987 to 1993 and from 2000 to 2005 constitute "acts of terrorism." But the First and Second Intifadas weren't acts of terrorism; they were mass rebellions against terrorism--the terrorism of the settler-colony state of Israel, which for 68 years has systematically attacked noncombatant Palestinian civilians to create, maintain and expand an ethnocentric, Ashkenazi-dominated state on land stolen from the indigenous Palestinians who lived there.

As documented by acclaimed Israeli historian Ilan Pappé, Israel's founding itself was steeped in terrorism, specifically the deliberate dispossession and expulsion of a conservatively estimated 750,000 Palestinians by Israel's founding fathers between December 1947 and March 1949, who did not hesitate to rape, torture or massacre the residents of some 300 Palestinian towns, including Deir Yassin, Tantoura and Dawaymah, in order to make way for their colonial designs.

But this was merely one chapter in decades of Israel's state-sanctioned terror directed at Palestinians who were made into second-class citizens in their own lands.

In 1967, the terror that accompanied the occupation of the West Bank and Gaza established a regime of military control, containment, strangulation and surveillance over millions of Palestinians.

In 1982, Israel facilitated the massacres at Sabra and Shatila, two Palestinian refugee camps in Beirut, which the Israeli military intentionally allowed Lebanon's marauding, far-right Maronite Phalange to enter and carry out the murder of 800 Palestinian refugees, with the aid of Israeli flares and surveillance, and under the direct orders of Ariel Sharon, the future Israeli prime minister.

In 2006, Israel blanketed Lebanon's agricultural heartlands with 4 million cluster bombs that were still claiming life and limb years later. In the densely populated Gaza strip in 2008, 2012 and 2014, Israel carried out a string of war crimes. Its most recent assault on Gaza alone killed 490 Palestinian children.

And finally, there is the terror of everyday life for Palestinian people, languishing and dying under military occupation, blockade and second-class citizenship in Israel, suffering incessant waves of state-protected settler violence and execution by Israel Defense Force soldiers, and cut off from one another by Israel's colossal apartheid wall, which is four times as long and in some places twice as high as the Berlin Wall.

For more than 11 of the 18 years spanning 1987 to 2005, the Palestinian people marched on the streets and met the occupier's U.S. funded war-machine with stones, slingshots and bold acts of civil disobedience, while one Israeli prime minister, Yitzhak Rabin, instructed his troops to break Palestinian bones.

But despite all of this, and despite the best efforts of the Israeli state and its international allies to treat Palestinians as something less than human, the Palestinian people have never stopped fighting for what any one of us would want out of life--peace, comfort, stability, happiness and freedom.

POPULAR MOBILIZATIONS and the dissemination of critical ideas pose a threat to the far right-wing Israeli regime that falsely portrays itself as the "only democracy in the Middle East," because these forms of activism reveal the underlying reality of apartheid that defines Israeli society.

This explains why the strategy of the pro-Israel forces today is to clamp down on dissent, muffle free speech and spread panicked accusations of hate-speech and violence each time someone demands human rights for Palestinians.

The BDS movement is only the latest in a long line of struggles for justice that the Columbia University administration initially opposed--including the effort to boycott Nazi Germany in the 1930s and the campaign against apartheid South Africa in the 1980s--by imposing a variety of sanctions on the students who championed them.

Today, the struggle in defense of Palestinian civil and human rights must likewise confront both those who directly deny these rights in Palestine as well as those who would seek to restrict our freedom to organize here in the U.S. We must stand for the civil rights of Palestinians as well as the right to free speech on campus.

Understanding that they are stronger together than separate, student organizations at Columbia and Barnard are forging new bonds of solidarity and support for each other's causes. You should join these struggles too--to insure free speech for everyone and to add your voice to the struggle for justice.