Whose lives are on the line?

Since the shootings in Dallas, the media have been filled with hot air about how the police put themselves in harm's way to protect all of us. Derek Wright begs to differ.

THE POLICE in the U.S. kill someone every eight hours on average.

Early in the morning of July 5 in Baton Rouge, Louisiana, that someone was Alton Sterling. A pair of cops--for now unidentified and currently on paid vacation--tackled Sterling, who was selling CDs outside a convenience store, and pinned him facedown on the ground. Then, at least one and maybe both opened fire, shooting him four to six times at point-blank range in the back and chest. An ambulance showed up about 10 minutes later, and paramedics pronounced him dead.

According to the store owner who was standing "two feet away" during the altercation, Alton wasn't holding a weapon and didn't reach for anything. Perhaps his body was still involuntarily twitching from the Taser shot he had already received, but he made no motion that could be construed as threatening.

The police have already seized the store surveillance system and all of the footage. They claim the body cams they were wearing "fell off" during the scuffle, and don't show what happened. 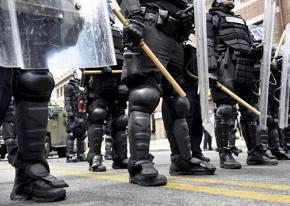 However, part of the incident was captured by another witness on a cell phone. Watching the footage reminded me of seeing the multiple videos showing the BART police murdering Oscar Grant in an Oakland, California, transit station during the early morning hours of New Years Day in 2009--and then leaving him to die, while they showed more interest in seizing cell phones from the dozens of witnesses than in calling an ambulance.

This time, it's someone trying to sell CDs to get by--something I'm about to start doing myself!--who was murdered by two hyper-aggressive cops. Selling music (while Black) is not a capital crime.

WHILE THE cops are busy murdering someone every eight hours on average, someone in the U.S. is killed on the job almost every hour and a half--16 people per day in 2006, for example. If you rank occupations by the number of workplace fatalities per 100,000 workers--the so-called "fatal work injury rate"--you're far more likely to be killed on the job working as a farmer than as a police officer.

The Jon Kelley Wright Workers Memorial Fund is a project of the Center for Economic Research and Social Change and Haymarket Books to publish books about the labor movement and other struggles of working people in honor of workers who have been killed on the job.

To find out more, please visit http://workersmemorialfund.org, where you can also contact the fund. To support this project, you can give a tax-deductable donation to the fund by writing a check payable to “CERSC,” writing “Workers Memorial Fund” in the memo line, and sending it to: CERSC, P.O. Box 258082, Chicago, IL 60625.

We're told that the police "put their lives on the line every day"--and we hear that tired old line all the more often since the killing of five officers by an army veteran in Dallas last week.

What the police do every day is take the attitude that they're an armed force that operates above the rest of society and is constantly at war with everyone else--or at least the vast majority that isn't wealthy.

Being a cop would be an extremely safe job if police weren't regularly escalating situations everywhere they go. "Escalating situations" isn't a strong enough way to put it when you show up at a scene and start shooting in under two seconds--like Timothy Loehmann, the officer who killed ‪Tamir Rice in Cleveland in 2014.

On average, the police spend upwards of 60 hours training to use a gun--yet they still seem to have trouble distinguishing firearms from Tasers, the excuse used to justify ‪‎Oscar Grant‬'s murder. By contrast, the cops spend less than eight hours being trained on conflict resolution or how to de-escalate a tense situation.

We need an entirely different institution to ensure public safety. Having trigger-happy racists with unlimited access to military gear who are sworn to protect the sanctity of private property isn't working. This isn't a new problem, but we're finally being forced to see it for what it is.

To put this in perspective: In 2014, 126 police officers died on the job--the release of this statistic was accompanied by many headlines about how that represented a 24 percent increase from 102 in 2013. The FBI's stats say there were 627,949 total sworn officers in 2014. That's a fatal work injury rate of exactly 20.0 for every 100,000 full-time employees.

How does that compare to other industries? According to the Bureau of Labor Statistics, in 2014, police officers had a slightly higher rate of on-the-job fatalities than taxi drivers (18.0 per 100,000 full-time drivers) and electrical power line installers (19.2). The cops fell well below the statistics for driver/sales workers and truck drivers (24.7), structural iron/steel workers (25.2), farmers (26.7), sanitation workers (35.8), roofers (47.4), aircraft pilots and flight engineers (64.0), fishing workers (80.8) and, with the highest rate, logging workers (110.9).

So it's a little more dangerous to be a cop than to work with power lines--but it's far more deadly to be a truck driver or sanitation worker.

What's more, a large number of on-the-job police fatalities are the result of traffic accidents, which confirms the wider point that any occupation involving driving has greater dangers. And the reality behind this statistic is that many of the fatal accidents take place during high-speed chases initiated by officers who put larger numbers of people at risk to pursue suspects accused of minor crimes.

ALTON STERLING is dead because of racism, both systemic/institutional and personal--and because the American state funds, arms and trains a militarized police force that can kill with almost total impunity, especially the poor and people of color.

Alton Sterling, may you rest in peace, but may the rest of us not be passive and "peaceful." As Dr. Martin Luther King Jr. said, "True peace...is the presence of justice." As Mother Jones said, "Mourn for the dead, fight like hell for the living."

We must draw a line in the sand and challenge this horrific pattern of police murder, followed by a slap on the wrist at most, and full acquittal and a return to "the force" in most cases.

Arrest the murderers of Alton Sterling, Philando Castile and the other victims of police murder. Release the surveillance footage. Convict the cops and put them in jail. ‪