Alan Maass examines some of the stories we're told about social change that prop up the status quo, in the first article in a new series called "A User's Guide to Marxism."

ABRAHAM LINCOLN freed the slaves, George Washington won the Revolutionary War, and Franklin Roosevelt came up with the New Deal, so you have him to thank for unemployment benefits and unions.

Those might be the answers to some of the first history tests you took in grade school, but it doesn't take a Marxist to realize there's more to the story. You probably also learned that slaves like Frederick Douglass struggled for their own freedom. And it took the Union Army, composed partly of ex-slaves by the war's end, to make Lincoln's Emancipation Proclamation a fact.

But the simplistic slogans that reduce history to the actions of a few "great men"--and very occasionally a great woman--are shorthand for a view in which the world is divided between a few "strong leaders" and the rest of us who are led.

So maybe it did take the Union Army to overthrow the slavery system, but none of those soldiers knew what to do until they were ordered into action by "great men." And we know, of course, that it look a "tough leader" like Donald Trump, unafraid to speak the truth, to tell us who to blame for America's problems so we can make it great again.

The founding documents of a capitalist society like the U.S. may preach about equality, but one of its dominant assumptions is the importance of individuals and their achievements.

The English novelist William Golding--whose loathsome book Lord of the Flies you may have been assigned to read and hopefully blew off--took this point to its logical conclusion: "New ages, new schools, new floods of literature do not emerge by a process of gradualism from what went before. Nor are major changes in awareness merely the work of economics or even the accumulation of knowledge. They have always come in the first place through the medium of one man."

Grateful as we are to this succession of "one men" through history--and noticing again that women don't seem to enter the picture much--you have to ask: What makes them so special?

What made Lincoln different from the rest of society that wasn't capable of acting until they were told what to do? It's a short step from that question to some of the most elitist answers about what sets human beings apart from each other--heredity, superior intelligence, divine right. 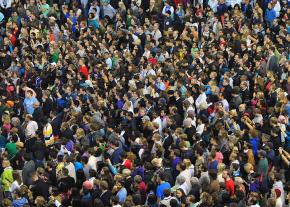 The idea that Lincoln was uniquely qualified to lead makes even less sense as you learn more about the Civil War era, where Lincoln's ideas and conclusions were shaped by the pressures of pro- and anti-slavery forces in conflict--leading to him changing his mind about exactly what should be done about slavery. In very un-strong-leader-like terms, Lincoln himself wrote, "I claim not to have controlled events, but confess plainly that events have controlled me."

Karl Marx--an outspoken supporter of the North in the Civil War and ultimately an admirer of Lincoln for the role he did play--put at the start of the Communist Manifesto an explanation of how events could control even revered individuals:

The history of all hitherto existing society is the history of class struggles. Freeman and slave, patrician and plebeian, lord and serf, guild-master and journeyman, in a word, oppressor and oppressed, stood in constant opposition to one another, carried on an uninterrupted, now hidden, now open fight...

CLOSELY ASSOCIATED with the "great man" theory is the belief that history is guided by timeless principles, like individualism or the "entrepreneurial spirit."

This is another way of saying that How Things Are now is how they've always been--or at least how they should stay from now on. Think about how The Flintstones and The Jetsons imagine societies of the distant past or distant future: Pretty much the same as our own--with the nuclear family, drudgery-filled work for a domineering boss and going out on the weekend for a Bronto Burger.

If you accept that there are principles guiding society that are eternal and natural, then you've accepted a justification for not changing the structure of the current society that's ruled by them.

But if you dissent from that view of history--if you know that for most of their existence as a species, humans lived in cooperative arrangements where the concept of "individualism" would have made no sense, and if you recognize that what underlies the doings of "great men" are actions and conflicts involving the mass of society--then you've reached a potentially revolutionary conclusion: Human societies have changed before, and so they can change again, through the process of conflict and struggle.

The socialist poet Bertolt Brecht had the last word about "strong leaders" in his poem "Questions from a Worker Who Reads":

Who built Thebes of the seven gates?
In the books you will find the names of kings.
Did the kings haul up the lumps of rock?
And Babylon, many times demolished
Who raised it up so many times? In what houses
of gold-glittering Lima did the builders live?
Where, the evening that the Wall of China was finished
Did the masons go?...

The young Alexander conquered India.
Was he alone?
Caesar beat the Gauls.
Did he not have even a cook with him?

Philip of Spain wept when his armada
Went down. Was he the only one to weep?
Frederick the Second won the Seven Year's War. Who
Else won it?

Every page a victory.
Who cooked the feast for the victors?
Every ten years a great man.
Who paid the bill?

So many reports.
So many questions.

But we don't go to the other extreme. The Russian novelist Leo Tolstoy wrote against the idea of "great men" in War and Peace, insisting that all historical figures were shaped by forces beyond their control. But he concluded that individuals are "history's slaves," acting out predestined and unchangeable roles.

By contrast, Marxism recognizes that human beings are products of the material conditions of a given society and forces that are bigger than them. But they are also capable--under the right circumstances and within historical limits--of changing those conditions. As Marx wrote in The Holy Family:

History does nothing, it "possesses no immense wealth," it "wages no battles." It is man, real, living man who does all that, who possesses and fights; "history" is not, as it were, a person apart, using man as a means to achieve its own aims; history is nothing but the activity of man pursuing his aims.

In other words, human history is made by human beings--it is the outcome of their collective activity, not fate or impersonal laws. But people don't make history "as they please; they do not make it under self-selected circumstances, but under circumstances existing already, given and transmitted from the past," Marx wrote.

Throughout recorded history, there have been people who dreamed of a society of equality and plenty. Some of them--like Spartacus in ancient Greece or the groups of peasants who rose up in Europe hundreds of years ago--rebelled against tyranny, with an egalitarian vision guiding their actions.

But it wasn't possible to achieve an egalitarian world under conditions that were too impoverished for there to be enough to go around. Not being able to produce an abundance meant there would ultimately be some who got and some who didn't--haves and have-nots.

In a matter of a century, they wrote, this new economic system had raised human knowledge, technology and productive potential to the point where society could be reorganized on the basis of abundance--of every person in the world getting enough to eat, a sturdy roof over their head and much more.

The conditions have existed under capitalism to realize the world of equality and plenty so often dreamed of in the past. But this isn't inevitable--"history does nothing" on its own.

The movement of the immense majority has to organize itself and fight for a new world--for two reasons. The first is obvious: The minority ruling class that presides over capitalism isn't giving up its wealth, privilege and power without a fight. "Revolution is necessary," Marx wrote, "because the ruling class cannot be overthrown in any other way."

But Marx added another point to this sentence about revolution: "...but also because the class overthrowing it can only in a revolution succeed in ridding itself of all the muck of ages and become fit to found society anew."

The working class is hindered and held back by the prejudices and degradations inflicted on it by capitalist society. But struggles to transform even limited aspects of that society change those who participate in them--by connecting them to others, by raising their horizons, ultimately by teaching them about their power to change the world.

The many struggles in every corner of society that culminate in a revolution aren't waged by some "class" in the abstract--they are organized and led by real, individual people.

For socialists, that kind of "leader" isn't a myth at all, but an essential part of changing society. We just look forward to the day when there are masses and masses of "leaders"--and no such thing as the "led."