Taking Trump as a starting point, Phil Gasper looks at use and abuses of ideas about human nature, in a new article for our series "A User's Guide to Marxism."

IN LATE November, Dictionary.com announced that "xenophobia"--which it defines as "fear or hatred of foreigners, people from different cultures or strangers"--was its Word of the Year for 2016.

Searches for the word spiked in June following the Brexit vote in the UK and a speech by President Obama accusing Donald Trump of promoting "nativism or xenophobia." They spiked again the day after the election. As the website pointed out:

This year in the United States we saw the rise of the alt-right, white nationalism and other ideologies that promote hate, especially directed toward Muslims, Latinos, Jews, trans and queer communities, black America and other nondominant groups.

While many people have condemned these developments and the sharp rise in hate crimes associated with them, others have tried to normalize them.

The former London Mayor and current British Foreign Secretary Boris Johnson, who led the campaign for Brexit from the European Union, told an audience that xenophobia "is part of human nature. It doesn't mean people are bad, OK?"

But the idea that xenophobia is part of human nature also has also been defended by some biologists and psychologists. For example, in the 1970s, the Harvard entomologist Edward O. Wilson, one of the world's leading experts on ants, claimed in his book Sociobiology that characteristics such as competition, aggression, territoriality, xenophobia and warfare are universal and have a genetic basis.

Similar claims have been made more recently by some so-called evolutionary psychologists, who argue that underlying features of human psychology were shaped by the evolutionary pressures faced by early humans, and have changed little since.

Among these pressures was supposedly the need to survive in small groups competing with other such groups, which favored those who distinguished between insiders and outsiders, and who prioritized the former over the latter.

These arguments lead to the conclusion that attempting to create a society based on equality and cooperation, rather than inequality and competition, goes against human nature. Wilson reportedly quipped about Marxism, "Wonderful theory. Wrong species." 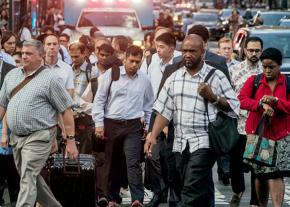 The evolutionary psychologist Steven Pinker criticizes "Marxists, academic feminists and cafe intellectuals" and claims that inequality and conflict are inevitable features of human society. According to Pinker, "The standard Marxist theory of human nature has probably been refuted by many sources of evidence, including the anthropological record and Darwinian theory."

THE ARGUMENT that human nature rules out radical social change has probably been around as long as class society has existed, but it is the theories of the sociobiologists and the evolutionary psychologists that are mistaken.

To take the case of xenophobia, it is simply false that fear or hatred of strangers is a universal feature of human psychology. The Harvard biologist Richard Lewontin notes:

[T]he attitudes of people toward foreign cultures and other countries have varied tremendously from social class to social class and time to time. Could the aristocracy of Russia in the nineteenth century, which thought all things Slavic to be inferior, which spoke French by preference, which looked to Germany for its military and technological resources, be described as xenophobic? Educated and upper classes in particular have often looked to other cultures for the highest and the best.

Nineteenth-century European aristocrats are not the only ones to show no fear of people from other cultures. The historian Howard Zinn reports that when Christopher Columbus and his crew came ashore in the Bahamas in October 1492, Arawak Indians "ran to greet them, brought them food, water, gifts." According to Zinn:

These Arawaks of the Bahama Islands were much like Indians on the mainland, who were remarkable (European observers were to say again and again) for their hospitality, their belief in sharing.

Of course, given Columbus's intentions, the Arawaks might have been better served if they had been more suspicious of their visitors. Columbus wrote in his log: "They would make fine servants...With fifty men we could subjugate them all and make them do whatever we want." Within a few years, Columbus and his men had slaughtered tens of thousands of the Indians in a frenzied search for gold.

Nevertheless, the Arawaks' initial response to the Europeans is enough to show that xenophobia is not a universal trait. And it is easy to think of countless other examples in which people from different backgrounds have lived together harmoniously, or have united across national and ethnic lines to fight for social justice.

Even if a particular trait is universal, this doesn't mean that it has a genetic basis. German speaking is nearly universal in Germany, but the explanation is not that inhabitants of the country are genetically predisposed to speak a particular language.

Sometimes, sociobiologists claim that non-human animals share the characteristic in question--aggression, for instance--and that this shows it probably has a genetic basis. But Lewontin points out that this kind of reasoning is also quite unpersuasive:

How do we decide that slavery in ants and ant queens is like human slavery and like human royal families? How do we decide that the coyness we see in people is the same as the behavior in animals called coyness? What happens is that human categories are laid on animals by analogy, partly as a matter of convenience of language, and then these traits are "discovered" in animals and laid back on humans as if they had a common origin. There is in fact not a shred of evidence that the anatomical, physiological, and genetic basis of what is called aggression in rats has anything in common with the German invasion of Poland in 1939.

ATTEMPTS BY evolutionary psychologists to show that various characteristics are "hard wired" into human psychology also fall flat. Just like sociobiologists before them, evolutionary psychologists often ignore alternative explanations of human behavior, as well as evidence that the psychological characteristics that they claim were built into the human mind hundreds of thousands of years ago are not universal after all.

Sociobiologists and evolutionary psychologists adopt an ultra-adaptationist view that tries to explain every significant aspect of human behavior or psychology as a biological adaptation, shaped by natural selection.

But while human intelligence was surely the subject of natural selection, it is highly implausible to think that specific behaviors or psychological characteristics are hard wired into our brains. As the evolutionary biologist Stephen Jay Gould once put it:

The central feature of our biological uniqueness also provides the major reason for doubting that our behaviors are directly coded by specific genes. That feature is, of course, our large brain...

[M]arkedly increased brain size in human evolution...added enough neural connections to convert an inflexible and rather rigidly programmed device into a labile organ, endowed with sufficient logic and memory to substitute non-programmed learning for direct specification as the ground of social behavior. Flexibility may well be the most important determinant of human consciousness; the direct programming of behavior has probably become inadaptive.

When our early ancestors stopped living in trees and began walking upright, their hands were freed to produce and use more complex tools. Tool-using created evolutionary pressure for greater brain development, which in turn brought increased intelligence and the emergence of language. This is the basis for the enormous flexibility of human behavior.

It is the human ability to learn and to pass on newly acquired knowledge and behavior to future generations that makes it impossible to understand the complexities of human society in biological terms, even though we are biological creatures.

These considerations from evolutionary biology are reinforced by what we know about brain development in the growth of individual humans. While some peripheral structures, such as sensory cells, are genetically specified, most brain structures develop as the result of brain cell proliferation followed by a process of "pruning."

While the initial process of proliferation is under genetic control, the process of brain-cell pruning depends on interaction between cells and the environment. Thus, the cortical structures we end up with are not genetically specified, but mainly shaped by our environment.

The claim is not that there are no biological limits to human behavior, but that our biology has made a much greater range of behaviors possible than in other species.

Human beings are not naturally violent, selfish, competitive, greedy or xenophobic. It is not natural for human societies to be organized hierarchically or for women to have lower social status than men, and modern capitalist society does not exist because it uniquely reflects human nature.

As Gould noted, "We would lead very different social lives if we photosynthesized (no agriculture, gathering or hunting--the major determinants of our social evolution) or had life cycles like...gall midges," which devour their mothers' bodies from the inside, and which are in turn eaten by their own offspring within a few days.

The range of potential human behaviors thus has limits. In fact, if such limits did not exist, then it would be possible for there to be class societies in which the majority of the population was socially conditioned to be permanently reconciled to its exploitation and oppression. But the whole history of class societies is a refutation of that idea.

No one was more aware of this than Marx, which is why from his earliest writings, he condemns capitalism as inhumane--a society in which most human beings cannot live satisfying lives, engage in fulfilling work, or relate in satisfactory ways to other people or to the rest of the natural world. In other words, capitalism frustrates basic human needs and human nature.

Labor [under capitalism] is external to the worker, i.e. it does not belong to his essential being;...in his work, therefore, he does not affirm himself but denies himself, does not feel content but unhappy, does not develop freely his physical and mental energy but mortifies his body and ruins his mind.

Biological determinists want us to believe that human talent is naturally scarce so that the hierarchies that exist in capitalist society reflect human nature. By contrast, Marxists argue that capitalism is not natural and that the artificial limits imposed on human development by our current forms of social organization are the real limits to our potential.

Under capitalism, most people lack control over central areas of their lives and are able to exercise their capacity to engage in creative activity only in limited ways, if at all. That results in a vast squandering of human talent. In a society in which exploitation and oppression had been abolished, there would be a huge flowering of human creativity. As the Russian revolutionary Leon Trotsky put it, under socialism:

[m]an will make it his purpose to master his own feelings, to raise his instincts to the heights of consciousness, to make them transparent, to extend the wires of his will into hidden recesses, and thereby to raise himself to a new plane...The average human type will rise to the heights of an Aristotle, a Goethe or a Marx. And above this ridge new peaks will rise.