Luisa G. describes her family's experience of immigration from their native Colombia, and has a strong warning for anyone who says they have a problem with it.

She wishes she could simply take a taxi and go visit her grandmother, who she has not seen in person in four years. That's the last time my mother could afford to take off work and pay for a trip to Colombia.

Yes, we are documented, but our story is the same in many ways as for those who are undocumented. I would venture to say that the majority of immigrants in this country, undocumented or not, aren't here because they wanted a change of scenery. They are here as a matter of survival. They are here because of the ravages of capitalism in developing countries.

We got our papers through my mother's brother, who petitioned her before I was born. It took over a decade. Most of my mother's family was here already. My grandmother and uncle left in the 1970s, when my mother was a teenager, and my aunt left in the early 1980s. My mother's family was broken up, and later, her own family would be broken up as well, by an unforgiving, bureaucratic immigration system that has no regard for human suffering. 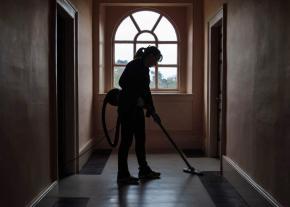 My mother, my brother and I came to the U.S. in 1998. We came here because my mother wanted to take us away from the violence of poverty and the violence created by a civil war that began when she was a child.

By the age of 10, I had witnessed stabbings on the street, seen a dead body in the dumpster behind my house, and woken up to the sound of a bomb going off in the meeting hall next to my house--twice--all because of the conflicts and desperation created by capitalism.

MY MOTHER tried. She tried her very best despite so many personal and systemic obstacles, like not being able to graduate high school.

She sang in clubs and parties on the weekends as her main source of income so that she could be home with us during the week. She sold lemonade on the street while I was in school. She scraped money together to buy a hot dog stand. She worked construction, despite the constant harassment of male co-workers. Nothing she did was ever enough.

She came here to clean wealthy people's homes--a job that has aged her body far beyond her chronological age, a job in which she is verbally abused and exploited by clueless assholes who have never had to clean a fucking toilet in their lives--in order to give her children and grandchildren opportunities and comforts she never had.

Every day, I think about all I've missed. My oldest niece was four when I left. Her sister was a newborn I only got to hold a few times. I have never met my nephew.

So when I hear that we are criminals, that we are monsters who lurk in the shadows to steal from hardworking (white) "Americans," I experience a very special kind of rage. Don't talk to me about stealing when three continents were literally stolen from Indigenous people.

We are here, we deserve to be here, and we will fight tooth and nail for the dignity and respect that we deserve. Trump, his gang of Nazi demons, and this whole inhumane system can go to hell. They commit unspeakable atrocities with the stroke of a pen, but we are the monsters?!?