Nothing less than full equality

Why is the New York Times proposing more "rational" ways for Donald Trump to carry out his sickening crackdown on immigrants and their communities?

IN A March 20 editorial, the New York Times called for a crackdown on businesses employing undocumented workers. Otherwise, the newspaper warned, "American taxpayers will continue bankrolling an expensive, heartless crackdown on immigrants for years on end. Meanwhile, employers will continue to quietly reap the benefits of immigrant labor while looking the other way."

Five days earlier, in an industrial neighborhood in Queens--four miles and a universe away from the Times Midtown offices--management at Tom Cat Bakery handed out letters stating that as a result of a government audit, workers who couldn't provide proof of their immigration status within ten days would be fired.

Is this what the New York Times wants? And if so, how is it any different from the "heartless crackdown on immigrants" they claim to be against?

It surprised many people to see the country's most famous liberal newspaper giving the Trump administration advice on how to go after immigrants more efficiently. If there's been a silver lining to Trump's xenophobia, it's been that major media outlets like the Times have finally been doing some reporting on the human toll of deportations and immigrant detentions, which they largely failed to do during Barack Obama's eight long years as the "Deporter-in-Chief". 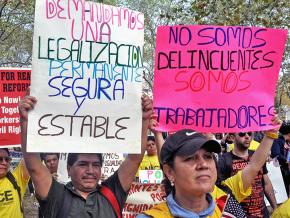 Immigrants and their supporters should take the Times editorial as an unpleasant but important reminder that we shouldn't confuse the liberal establishment's eagerness to attack Donald Trump with it actually being on our side.

It's also a warning that if our fight against Trump's immigration policies doesn't develop our own demands for full justice and equality, other worse demands will be imposed by liberal voices that claim to speak for us.

THE TIMES is correct that the lack of employer punishments exposes the hypocrisy of politicians who claim to be going after undocumented immigrants because they have broken the law. As the editorial notes:

American employers continue to assume relatively little risk by hiring undocumented immigrants to perform menial, backbreaking work, often for little pay. Meanwhile, as Mr. Trump's deportation crackdown accelerates, families are being ripped apart, and communities of hard-working immigrants with deep roots in this country are gripped by fear and uncertainty.

As he does with everything, Trump takes this long-existing double standard and makes it more obvious and grotesque. He rails against immigrants as "criminals" and wants to create a ministry of propaganda spreading stories of supposed immigrant violence--all the while assembling a cabinet of crooks whose crimes include illegal mortgage foreclosures (Steven Mnuchin) and racially biased prosecutions (Jeff Sessions), among many others.

But this duplicity isn't unique to Trump. It's a feature of immigration enforcement in the U.S. and every other country.

The central purpose of the wave of fear inspired by Immigration and Customs Enforcement (ICE) raids across the country is not to deport all immigrants or to stop them from "taking" jobs from workers born in the U.S. It is to keep most at their jobs--but in an even more vulnerable position: Afraid to stand up for their rights (and risk the boss calling ICE) or look for another job (where they might have to provide new documentation).

There is growing evidence that immigration agents are going after immigrants who are workplace leaders--like the Tom Cat employees who have organized successful campaigns to win better conditions and the three Vermont dairy worker activists arrested by ICE two weeks ago.

These workers are being targeted not because they've broken any laws but because they are demanding that their employers follow the laws that are supposed to protect workers from ultra-low pay and inhuman working conditions.

The New York Times is correct to denounce Trump's bogus "law enforcement" policies that imprison and deport immigrant workers while ignoring the far more serious crimes of their bosses.

But the solution is to punish employers for violating labor law, not immigration law, and to decriminalize immigration altogether and stop persecuting people for migrating to countries where they can make a better life.

As a native-born union activist said at a rally for Tom Cat workers, "No matter their status, if they're working here they deserve respect and they deserve rights."

THE GROWING resistance to Trump will likely take a major step forward on May 1, with large protests and hopefully strikes in cities and towns around the country.

Immigrants rights protests will be front and center on this historic day, which means that this is an important moment for the movement to debate and discuss not only what we're fighting against but what we're fighting for--and figure out how to win millions of people to our demands.

We propose starting with two simple principles: Everyone should have equal rights regardless of where they were born, and human beings should have the same rights as businesses to cross borders. These are basic concepts that most people would agree with, but they are a major challenge to some of the ways that our bosses keep us weak and divided.

From the standpoint of these principles, many of the measures put forward by supposed allies of immigrants in the Democratic Party--such as guest-worker programs, deporting immigrants for criminal offenses after they've already been through the justice system, putting other immigrants on a long (perhaps endless) "path to citizenship" and shutting the door on people who haven't yet arrived--aren't compromises on the road to justice but more tidy ways to regulate permanent inequality and provide employers with precarious workers.

This doesn't mean our movement should reject all compromises short of creating a world without borders. The immediate concern must, of course, be to stop Trump's wave of deportations.

But it does mean that we should reject the dead-end trajectory of the so-called "comprehensive immigration reform" pushed for years by Democrats and "moderate" Republicans. The last version of this in 2013, introduced by New York Democrat Chuck Schumer, was filled with Trumpian measures like adding 40,000 Border Patrol agents and deploying the National Guard to the border.

Democrats insist that they only back these horrible measures in order to get something passed that could help current undocumented immigrants, but the recent Times editorial shows something different.

At a moment when there can be no compromising with Trump, the liberal establishment is still looking for ways to stop the "flows of undocumented immigrants" that it clearly considers to be a problem--even as it has nothing to say about the U.S. drug wars and trade deals that create the violence and poverty driving people to cross the border in spite of Trump's "heartless crackdown."

As we build toward May Day and beyond, our goal should be to build a movement strong enough and proud enough to say no thanks to these so-called allies--and assert that we want nothing less than full freedom and equality for ourselves, our loved ones and our neighbors.