How free is “free” labor?

In the latest installment of our User's Guide to Marxism series, Leela Yellesetty explains why exploitation is the secret behind the inequality built into capitalism.

RECENT ARTICLES in the New York Times and elsewhere have highlighted the spread of so-called "noncompete clauses" in employment contracts.

While such clauses have long been commonplace for executives or highly paid professionals-- and justified by companies as a means of protecting trade secrets or market share--they are increasingly being demanded of even low-wage, blue-collar workers.

According to a recent University of Maryland study, about one in five workers are bound by noncompete clauses, and 42 percent of workers have signed one at some point in their working lives.

These clauses have rightfully come under fire for essentially trapping workers in their current jobs--and leaving them with little leverage to demand better wages and working conditions, since they couldn't find another job if they left. For employees with a skill set for, or experience in, a certain field or industry, this could be crippling to their career trajectory. For low-wage workers, it could mean a lack of any job opportunities at all.

Take, for instance, the agreement that Amazon makes their warehouse employees sign: "During employment and for 18 months after the separation date, employee will not...engage in or support the development, manufacture, marketing or sale of any product or service that competes or is intended to compete with any product or service sold, offered or otherwise provided by Amazon."

Given that Amazon sells practically everything, this would seem to effectively bar any employment for 18 months.

Often, these provisions don't stand up to legal challenge--the sandwich chain Jimmy John's, for instance, was forced to remove clauses barring workers from taking jobs at any other sandwich shop for two years after a lawsuit. In other cases, employers have successfully sued to prevent workers from leaving to go to a competitor.

As there are no federal regulations about noncompete clauses, enforcement varies from state to state.

Enforced or not, in the context of an economy in which the majority of workers are struggling to get by, many feel they have no choice but to sign whatever terms an employer demands--out of fear of losing their livelihoods if they challenge these provisions. 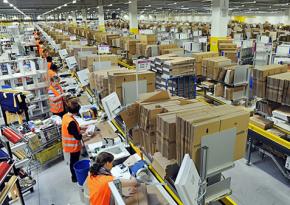 Connecting this issue to trends in health care coverage--which, since it is tied to employment for many workers, is also a means of keeping workers stuck in their jobs--New York Times columnist Paul Krugman observed:

You might say, with only a bit of hyperbole, that workers in America, supposedly the land of the free, are actually creeping along the road to serfdom, yoked to corporate employers the way Russian peasants were once tied to their masters' land. And the people pushing them down that road are the very people who cry "freedom" the loudest.

FOR CRITICS like Krugman, the solution lies in enacting progressive policies and reining in the worst excesses of employers, to the extent that they infringe on the free workings of the market. But for socialists, the problem--and the solution--goes much deeper.

Proponents of capitalism often claim that this is the ultimate expression of freedom: Workers and employers are free to enter into contracts for their mutual benefit. Yet even Adam Smith, one of capitalism's early theoriests, acknowledged that employers have a built-in interest in limiting that freedom:

What are the common wages of labor depends everywhere upon the contract usually made between those two parties, whose interests are by no means the same. The workmen desire to get as much, the masters to give as little, as possible. The former are disposed to combine in order to raise, the latter in order to lower, the wages of labor.

It is not, however, difficult to foresee which of these two parties must, upon all ordinary occasions, have the advantage in the dispute, and force the other into a compliance with their terms...A landlord, a farmer, a master manufacturer or merchant, though they did not employ a single workman, could generally live a year or two upon the stocks which they have already acquired. Many workmen could not subsist a week, few could subsist a month, and scarce any a year, without employment. In the long run, the workman may be as necessary to his master as his master is to him; but the necessity is not so immediate.

Karl Marx--who studied the work of Smith far more closely than many modern-day libertarians seem to have--argued that the apparently "free" market masked a hidden coercion.

In the first place, capitalism depends on one group of people that owns the means of production--factories, offices, machinery, raw materials, etc.--and another, much larger group that owns none of these, and must go to work for the smaller group to survive.

In this way, Marx argued that workers are free in a "double sense"--free to work or free to starve. As he wrote in Wage Labor and Capital:

THERE IS nothing natural about how this state of affairs came about. It was the result of a long and violent campaign of forced expulsions of peasants from the land in Europe and the conquest and enslavement of millions in the colonized world. As Marx put it, "[C]apital comes dripping from head to foot, from every pore, with blood and dirt."

Marx further observed that even the minimal freedom granted to workers to choose their particular employer evaporates once they set foot on the job. At work, the bosses exert complete control.

That this is a given is illustrated in a line in the New York Times article on noncompete clauses, which notes in passing: "Companies have always owned their employees' labor, but today's employment contracts often cover general knowledge as well."

For Marxists, this goes to the heart of how the capitalist system works. Employers purchase not a given amount of work, but a certain number of hours of labor power--and their profits derive from the value of the goods produced for them beyond the cost they pay out in wages.

Employers therefore have every incentive to squeeze as much labor out of workers as possible at the lowest cost. Noncompete agreements are just one of many methods of intimidation and compulsion used to achieve this purpose--to get employees to work harder for less.

This exploitation is the secret behind the tendency toward inequality built into capitalism. What masquerades as a free and equal exchange--a certain amount of work for a certain amount of pay--is actually a system of organized theft.

That such theft is taking place can be verified simply by observing the tremendous rise of worker productivity in the past few decades, even as wages continue to stagnate. As a result, we have the highest levels of inequality in human history--and the ruling class uses its wealth and power to further control and subordinate the rest of us.

THIS LACK of freedom for workers has both a material and a spiritual cost. The vast majority of people are stuck in jobs we don't find intrinsically meaningful or fulfilling, but are simply a means to survive.

This state of affairs leads to widespread alienation, not just from our work, but from ourselves and each other--which manifests itself in skyrocketing rates of depression, suicide and substance abuse, to name just a few of the bitter fruits of our so-called "free" society.

As British Marxist John Molyneux wrote in a pamphlet about the future socialist society:

The ultimate goal of Marxism, of socialism, and of the struggle of the working class is freedom. The bourgeoisie are, of course, keen to proclaim their commitment to freedom: freedom of speech, of the press, of the individual to do what they please with their money and so on. They know full well that as long as they control the means of production and therefore the wealth, the media, and the state, these freedoms remain enormously restricted and almost meaningless for the vast majority. They know also that they have the power to limit or indeed trample on such freedoms whenever they find it necessary.

In contrast, Marxists recognize that in a society divided into antagonistic classes, founded on exploitation and ruled by capital, there are and can be no "absolute" freedoms. We expose the sham abstract freedom offered by the bourgeoisie because what we want is real concrete freedom.

Freedom from hunger and poverty (without which all other freedoms mean nothing), freedom from war, from endless toil, from exploitation, from racial and sexual oppressions--these are the real freedoms we fight for. They can be made a reality only by establishing the positive freedom of the working class to run society.