His legacy is our hatred for him

Rahm Emanuel stunned Chicago and the political world with the announcement this week that he wouldn’t seek re-election to a third term as mayor of Chicago. The arrogant and ill-tempered Emanuel apparently calculated that he had made too many enemies to win next February by as comfortable a margin as he required.

Emanuel was a player in the Democratic Party apparatus before becoming mayor. He was a top aide to Bill Clinton, a member of the House of Representatives, and chief of staff to Barack Obama, where he was notorious for savagely attacking any criticism of the administration from the left. He came into the mayor’s office intent on busting the Chicago Teachers Union, but the teachers forced Emanuel to back down with their 2012 strike. Emanuel suffered another blow in 2015 when the long-delayed release of a video showing the police execution of Laquan McDonald sparked angry protests that continued for days, putting pressure on the police and the whole city machine.

Like other Chicagoans who despised Mayor 1 Percent, Nick Burt tried to find the right words to give Emanuel a proper send-off, in this article based on a post on Facebook.

I don’t hate him now in the way that some have felt a pull toward nostalgia when seeing a foe finally vanquished. I hate him in the way that I don’t think any exit — willed or otherwise — could ever approach what he deserves.

I hate Rahm Emanuel for many things.

I hate him every time I see a shuttered elementary school.

I hate him every time I read the name “Laquan McDonald.” 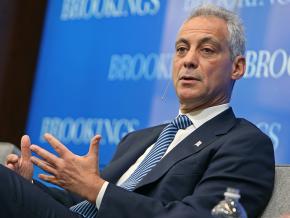 I hate him every time he postures as though he didn’t write for the president of the United States the following words: “achieve record deportations of criminal aliens.”

I hate him for being the worst possible composite of anti-social and unsavory traits — a look of what Patrick Bateman would be if he were a Mean Girl with the politics of Ronald Reagan.

I hate him for the petty, needless sort of misery he inflicted so casually upon the people of Chicago.

I hate him for having a transparent contempt for this city and the people in it, whom he could never quite seem to mask that he was “dealing with” or “managing” as he waited for some White House job to open up.

But above all else, I hate him for how he dealt with people with mental illness. Because this, I think, is the truest representation of his character.

KARI LYDERSEN’S 2013 book Mayor 1% opens with an anecdote: In March 2012, Emanuel attended a gala at the Chicago History Museum to celebrate the city’s 175th birthday.

As the Chicago Children’s Choir sang “Happy Birthday,” a woman in a floral headscarf approached the front, interrupting the festivities to plead with the mayor not to go forward with his plan to close down half of the city’s mental health clinics. “We’re going to die,” she begged. “There’s nowhere else to go...Mayor Emanuel, please!”

That woman was Helen Morley, an indefatigable activist and mental health patient who had earlier that winter led a sit-in at City Hall to try to save the clinics.

Emanuel, Lydersen writes, dutifully avoided making eye contact with Morley or acknowledging her presence. Instead, he shook the hands of friendly patrons and left. Within a few months, the clinics were closed, and Morley was dead. Morley’s friends said the stress of the clinic closures played a role.

I remember vividly seeing mental health patients and activists in the mental health movement camped out in front of the shuttered clinic on Milwaukee Avenue in Logan Square. The patients were pleading with the city to reopen the locked doors so they could go back in and get treatment.

They told me that patients would come out to sit in front of these closed clinics, sometimes out on the sidewalk with the former staff, who would stay with them until the wee hours of the morning. “To treat them?” I asked. “No,” I was told, “Just to hold them. Sometimes, that’s what they need.”

I still can’t understand what absence of human empathy and emotion could lead someone to purposefully and deliberately create that situation.

This man is a monster. And he’s the mayor for most of the next year.

I hate Rahm Emanuel, and I’m glad he’s leaving. But the indignity of not seeking a third term is not undignified enough to come close to justice.

Justice is rarely served for people like this — I heard Henry Kissinger, somehow still alive, being live broadcast over the weekend — but we must do our best in the months that follow to resist any rosy rewriting of this man’s history, make whatever time is left for him as difficult and unsuccessful as possible, and recommit to our efforts to embolden all those he bullied, battered or denigrated over the years so that they may find their power anew.

He was so hated that his enemies won: Let that be our own, collective dead fish sent to the mayor. Let’s make that the Emanuel legacy.