Billionaires take a stand for the working man

WHO SAYS the corporate media doesn't care about the opinions of ordinary people? There have been lots of articles lately about what workers think, written by the people who study them the most--bosses.

As a vice president of Rupert Murdoch's News Corp and a Wall Street Journal columnist, William McGurn naturally has his finger on the pulse of the American working class:

The notion that Wall Street and Main Street are fundamentally at odds with one another remains a popular orthodoxy. So much so that we may be missing the first stirrings of a true American class war: between workers in government unions and their union counterparts in the private sector.

According to McGurn, a true American worker doesn't mind having their 401(k) cut by a CEO looking to increase his year-end bonus. But he's fighting mad at his daughter's teacher because she has a union that's been able to keep her pension intact.

This analysis truly does go against "popular orthodoxy"--otherwise known as: what most people think. 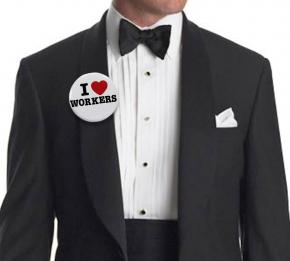 But McGurn's observations must have merit because they are corroborated almost word for word by Mort Zuckerman, real estate billionaire and publisher of U.S. News and World Report:

In Zuckerman's vision, government workers are different than you and me. They live in gated communities like Fireman Estates and flaunt their wealth on TV shows like Lifestyles of the Defined Benefit Plan and Who Wants to Marry a Child Services Case Worker?

In Public-Sector America, unionized postal workers and crossing guards pay hundreds of thousands of dollars for exclusive private schools for their kids, while the rest of us--Starbucks baristas, bank presidents, etc.--send our kids to overcrowded public schools. And now, this obscene inequality is apparently spurring a backlash from ordinary Americans like Joe the Plumber and Mort the Media and Real Estate Mogul.

IN NEW York, these plain folk have formed the modestly named "Committee to Save New York" (presumably they couldn't get the rights to "The Super Friends").

The Committee calls itself a "voice for the general public." Go to their Web site to see what they mean. All around the edges are pictures of us, the general public, in our hard hats and our various skin colors. And right in the middle, you can see our voice! It's a list of names and titles reflecting New York in all its diversity: some of them CEOs, some presidents and some "presidents and CEOs."

The plan to save New York is similar to the ones being proposed across the country: Cut public-sector jobs to pay for lower taxes on business, which will use that money to create new jobs--maybe even as many as they just got rid of!

Okay, so maybe it doesn't make much sense, but economic logic isn't what's motivating the attack on public-sector unions. It's about fairness.

Our bleeding-heart bosses are bothered that private sector workers--their workers--are suffering from layoffs and falling wages more than government workers, who are often protected by union contracts. They don't think it's right that only some workers should be made to pay for the government's bailout of the banks. Nor is it right for a few privileged workers to have access to government representatives via their unions. If most workers are shut out of having a political voice, then all workers should be.

In short, folks like Mort Zuckerman and the Committee to Save New York would like to see a reverse civil rights movement, the kind where MLK would have fought for whites to also not have the right to vote.

You might think that this situation presents unions with opportunity as well as a danger. After all, bosses are giving them free advertising about the advantages of collective bargaining. Unions could pass out flyers to Wal-Mart workers that read, "Want to be a part of that powerful special interest group the governor's been warning you about?"

Instead, most public-sector unions have meekly responded to the attacks with calls for "shared sacrifice" among business and labor. I've never taken a class on negotiations, but I thought you weren't supposed to announce your willingness to make concessions right from the start. Not only that, calling for workers and bosses to share the sacrifice during this recession gives the false impression that we shared the loot during the boom--or the bailout afterward.

There's only one way government workers will win the support of their private-sector neighbors. Fight and win. Show them that having a union can provide you with things that you can't have without one.

Not an easy plan, but at least it's simple.