Protesters against the NATO summit will put forward a different vision for society.

FIFTY HEADS of state are on their way to Chicago for the May 20-21 summit of the North Atlantic Treaty Organization (NATO). The world's most powerful military alliance will meet behind barricades and swarms of riot police and National Guard troops to discuss their strategies for continuing and extending the West's military domination of the world.

Meanwhile, thousands of protesters will march in dissent--though menaced by riot police, sound cannons and other obstacles designed to hamper their First Amendment right to free speech and assembly. For months, the city of Chicago has stoked fears of "a special breed of protester" hell-bent on mayhem and violence. News reports have been filled with warnings that "regular people" who work in downtown office buildings should avoid business attire so that they don't become targets of protesters' anger.

But the reality is that the "regular people" of all types are the ones who will be marching. Among the many groups planning to join the permitted mass march on May 20 are teachers, transit workers, students, nurses, religious leaders, Occupy activists, community groups, immigrant rights groups and environmentalists. 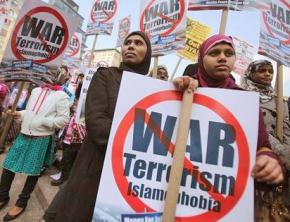 The people in Chicago this coming weekend who really ought to be feared are the NATO leaders themselves--especially if your origins are in the Middle East. Among them are war criminals responsible for civilian deaths, torture and the use of chemical weapons, such as white phosphorous in Afghanistan. Unlike the protesters, the war-makers who will gather at the summit have at their disposal the most lethal and sophisticated means of destruction on earth--and they aren't afraid to use them.

NATO leaders will congratulate themselves on their commitment to "peace" and "security," but the truth is that they are preparing for new and aggressive campaigns to dominate whole regions of the world. They will herald the end of NATO's decade-long war in Afghanistan, even as they sign agreements to allow the U.S. and other NATO countries to keep tens of thousands of troops in Afghanistan for a dozen more years.

NATO insists such measures are necessary to ensure "our security." But they never talk about how their idea of security rests on people dying under drone assaults, massacres and bombing runs. Or how the massive burden of military spending requires deep cuts in social services that imperil the lives of countless people in NATO countries like the U.S. and around the world.

THE U.S. national security apparatus is mobilizing astonishing numbers of police for the NATO summit--and creating an atmosphere of fear meant to permeate the city of Chicago.

"Police officers from Philadelphia, Milwaukee and Charlotte-Mecklenburg, N.C.; will assist the Chicago Police Department in handling thousands of protesters expected to descend on Chicago for this weekend's NATO summit," according to the Chicago Sun-Times.

More than 500 National Guard troops will be activated alongside 3,100 Chicago police assigned to NATO security and 700 Illinois state troopers. The total number of armed personnel in Chicago this weekend could top 5,000.

The cost of the summit is officially estimated at $55 million, but the actual costs of hosting such summits usually exceed the projections. Mayor Rahm Emanuel has attempted to mute criticism of the outlandish expense of hosting the summit by insisting that it won't cost taxpayers because city officials are appealing to "corporate citizens" to cover the costs through donations.

Meanwhile, Chicago is pushing through the closure of half of the city's mental health clinics for poor and uninsured residents--despite an inspiring campaign by mental health advocates and activists organizing against the closures.

If Emanuel has such ready access to corporate cash, why can't he scare some up for mental health care? The city says the closure will only "save" $3 million--though it may not even be that after taking into account the cost of treating mental health patients in emergency rooms or city and county jails. Some of Chicago's "corporate citizens" could find that in petty cash.

Police themselves have issued dire warnings of preemptive violence. According to activists who were pulled over on their way to Chicago, one of the cops involved said, "See, these guys know '68, these guys know all about '68." In a video of the incident, one officer asks, "What did they say back in '68?" Another answers, "Billy club to the fucking skull."

IF POLICE here show so little regard for the constitutional rights of U.S. citizens, it's safe to assume that the U.S. military is even more openly contemptuous of "our enemies."

That fact was underlined by the revelations of two investigative journalists who reported on a course for officers at the Defense Department's Joint Forces Staff College that advocated a "total war" against the world's 1.4 billion Muslims. A presentation from July 2011 states:

We have now come to understand that there is no such thing as 'moderate Islam'...It is therefore time for the United States to make our true intentions clear. This barbaric ideology will no longer be tolerated. Islam must change, or we will facilitate its self-destruction.

Since the publication of the exposé, Pentagon brass abruptly canceled the class, but hundreds of officers have passed through it since it was introduced four years ago. The course material is unmistakable in advocating the targeting of civilians and an offensive war against Islam. For example, one passage calls for applying "the historical precedents of Dresden, Tokyo, Hiroshima, Nagasaki" to Islam's holiest cities, and bringing about "Mecca and Medina['s] destruction."

This venomous hatred for an entire religion goes a long way toward explaining the depravity shown by some U.S. soldiers in their treatment of the people of Afghanistan. But it is also a necessary ideological component of the U.S. "war on terror." The demonization of Islam is useful not only in inspiring soldiers, but in getting people in the U.S. to accept the assault on public education and social services, and curbs on our civil liberties, as a price to pay in the "war on terror."

At the very least, it's more effective than trying to sell the real reason for NATO's occupation of Afghanistan: the Obama administration's determination to maintain a military presence, not only in the oil-rich Middle East, but close to its main economic competitors China and Russia.

In fact, a strong majority of Americans oppose continuing the war in Afghanistan. Yet there's practically no discussion of withdrawal within the U.S. political establishment. In part, this is because Barack Obama's reputation for bringing the war in Iraq to an end has given him credibility when he claims the war in Afghanistan is winding down--even though by his own timeline, this decade-old war isn't even half over.

This situation can only persist because the opposition to the war evident in opinion polls isn't backed up by a sustained mobilization that can force the U.S. government to abandon its plans. Until then, Washington will continue to dedicate a huge part of society's resources to the project of dominating the globe.

In the streets of Chicago this weekend, antiwar activists, the Occupy movement, labor unions and community groups will have the opportunity to demand a new set of priorities in place of war spending and falling living standards.

We will oppose war with humanity--and austerity with solidarity. We hope you'll join us.