Resistance in a year of fear

Donald Trump and his fellow Republican monsters may hog the headlines, but their outrages don't represent the full picture of the political climate in the U.S. today.

IN CARTOONS, years are usually drawn as Baby January who becomes frail Old Man December. But as this year ends with a disturbing cycle of public violence and racist fear-mongering, maybe the months of late 2015 will be drawn as a gunman screaming racial slurs.

The violence has come in different forms: there were the ISIS terror attacks on the streets of Paris and Beirut and a Russian passenger plane; right-wing terror attacks in the U.S. against a Colorado Planned Parenthood clinic and a Minneapolis Black Lives Matter protest; a mass shooting at a San Bernardino social service center that seems to have been a fusion of an ISIS-inspired attack and an American-as-apple-pie workplace massacre--and, not to be forgotten, as the media seem to, the biggest wave of violence against Muslims or those believed to be Muslim since the days after the September 11 attacks.

The racist fear-mongering can be seen in a surge of right-wing demagoguery on both sides of the Atlantic--from the unprecedented election gains made by the far-right National Front party in France to Donald Trump's commanding, though still early, lead in the race for the Republican presidential nomination. 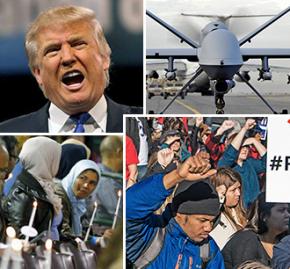 These disturbing developments are themselves products of and reactions to more deep-seated instabilities and injustices that many mainstream political leaders generally refuse to recognize, much less address: An economy where living conditions have stagnated or worse for the vast majority of people during the 2008-09 Great Recession and after; and the global chaos caused by the endless U.S. wars on terror and drugs, which is creating the largest refugee crisis the world has seen since the Second World War.

Bombarded by the mass shootings, the breakdown of Middle Eastern nation-states, the disappearance of international norms of decency toward refugees and the grotesque carnival taking over one of the most powerful political parties in the world, it's easy to conclude that society is simply coming apart at the seams.

But the horrors of the past months shouldn't stop us from remembering that 2015 was a year of polarization in U.S. society--with the increasing confidence of right-wing forces taking place at the same time as a less-remarked-upon growth in those looking for an alternative on the left.

At a time when the airwaves are filled with ridiculous police theories about the "radicalization" of Muslims--theories based on propaganda supplied to law enforcement agencies by professional Islamophobes--we need to locate and encourage the genuine and healthy process of left-wing radicalization wherever it's taking place.

IT'S WORTHWHILE to remember that in the days before the ISIS attacks in Paris, U.S. headlines were dominated by the wave of anti-racist protests sweeping across college campuses in the wake of historic demonstrations at the University of Missouri that pushed out the school's president. Campus protests and organizing have continued over the past month, even as most news coverage of it has not.

Still, the media have had no choice but to cover the stunning political crisis in Chicago, where Democratic Mayor Rahm Emanuel forced out his police chief, stood before the City Council to issue an unprecedented apology--and is still facing calls to step down after city officials were caught suppressing a video showing the police execution of Laquan McDonald last year.

After daily Black Lives Matter protests, Emanuel's approval ratings are down to 18 percent--and that's before he faces the possibility of another well-organized teachers' strike to fight not only for union demands but education justice.

Other progress for the left has received even less attention--like the recent decision by New York's Democratic Gov. Andrew Cuomo to back down from his aggressive efforts to tie teacher evaluations to standardized test scores.

This is a dramatic reversal--more like a surrender--after what was perhaps the largest test boycott in American history. It's also worth noting that it comes after a small but significant Green Party challenge against Cuomo in last year's election that led militant teachers to force their state union to withhold its usual automatic endorsement of the Democratic candidate.

Finally, of course, there's the most obvious and widespread expression of people shifting leftward: the Democratic presidential campaign of Bernie Sanders, who is polling at over 30 percent as an open (if quite moderate) socialist in party polls. Sanders, it should be noted, is even with or ahead of Trump and other Republicans in polling on head-to-head matchups.

If that last fact--Sanders trumps Trump--seems surprising, it might be because between January and the end of November, the nightly news shows of the three major TV networks devoted over 240 minutes to Trump and just 10 minutes to Sanders. ABC World News Tonight covered Trump for 81 minutes and Sanders for just one.

Amid the media's Trump cacophony, it can be easy to forget--or never find out in the first place--how small a section of the population his supporters represent. As political analyst Nate Silver wrote last month at FiveThirtyEight.com:

Right now, [Trump] has 25 to 30 percent of the vote in polls among the roughly 25 percent of Americans who identify as Republican. (That's something like 6 to 8 percent of the electorate overall, or about the same share of people who think the Apollo moon landings were faked.)

THE POINT here is not to minimize the real impact of the spread of Trump's poisonous ideas. There is no getting around the fact that a majority of Americans now say they oppose allowing Syrian refugees who are Muslim into the country, according to polls--an ominous sign of how widely Islamophobia spewed by the likes of Trump can spread in an atmosphere of paranoia about terrorism.

Instead, the reason to step back and gain a wider view of the political landscape so that we can more accurately assess where we are on the defensive, but also where we can push back and try to reverse the right-wing tide.

What's more, the understandable alarm over the Trump minority can distract from the main dynamic in the presidential race: While the Republican Party is in crisis because of its inability to find a candidate to beat Trump--who party leaders know can't win in a general election--Hillary Clinton is consolidating her commanding lead in the race for the Democratic presidential nomination.

Clinton looks certain to be her party's nominee not because her message is more appealing to voters, but on the contrary, because the Democratic Party is not a democratic party.

Rather it's an organization whose major decisions and nominations are determined by big money donations, corporate media connections and a rigged internal structure that gives more than one out of seven votes at the party's nominating convention to "superdelegates": party insiders who are almost unanimously supporting Clinton.

What this means is that the presidential candidate to represent the "left" within the narrow confines of the general election is probably going to be someone who symbolizes the status quo in every respect other than her gender.

That's in stark contrast to some countries, where widespread discontent has led to new left-wing parties and leaders emerging--and it's happening despite the fact that that same discontent in the U.S. has produced the Black Lives Matter movement, the Fight for 15 and the largest climate justice march in history during the past few years.

If and when Clinton becomes the nominee, there will be enormous pressure on Sanders supporters and activists, even if they would prefer to stay independent of Clinton and the Democrats, to join in the Clinton campaign, based on the familiar logic of the lesser evil. Clinton may not be perfect, the argument will go, but she's not nearly as bad as Donald Trump or Ted Cruz or some other loathsome Republican in the White House.

THE LESSER evil argument will sound convincing to many, but it's a losing strategy. We can't defeat Republican Islamophobia and anti-immigrant racism by backing a party whose current president carried out the most deportations in history and waged endless wars that have fueled terrorism and anti-Muslim hatred.

There's another way, and we've seen that it works. In 2004, the Republicans, led by George W. Bush, triumphed in the general election in large part because of a right-wing hysteria whipped up on social issues--especially a campaign to get state referendums against same-sex marriage the ballot. The goal was to get right-wing voters to the polls in an election year. The Republicans got what they wanted: anti-equality initiatives were passed in 11 out of 11 states, and Bush was re-elected.

Almost exactly 10 years later, the U.S. Supreme Court, despite a right-wing majority of justices, followed the tide of victories for equality with a decision that effectively ended the conservatives' legal efforts against same-sex marriage.

So how did that happen? Not by relying on Democratic politicians like Hillary Clinton and Barack Obama--both of whom opposed marriage equality until well after public opinion had shifted--but by pressing forward with protests, including the 200,000-strong National Equality March in 2009. Social media campaigns pushed LGBTQ people confidently demanding their rights into the national discussion and changed the culture.

More recently, the Black Lives Matter movement has shown a similar ability to change consciousness. In 2011, 29 percent of Americans told CNN pollsters that racism was a "big problem." in U.S. society. That number almost doubled to 49 percent this year.

As the Republican presidential candidates try to outdo one another in inciting fear of dark-skinned internal enemies, it's critical that we don't give in to our own fears of the right and instead take the fight directly to them, by organizing loud and confident protests and public forums that put forward solidarity with Muslims and immigrants in this country and support for people's struggles in the Middle East against the array of forces lined up against them, starting with the U.S. government.

Right-wing forces grow when there are political and economic crises and the left is unable to organize itself as an alternative.

In the Middle East, ISIS emerged out of the retreat and suppression of the revolutionary movements that emerged during the Arab Spring almost five years ago. In Europe, far-right parties like the National Front are seizing momentum after a summer in which the left-wing SYRIZA government capitulated to austerity blackmail from the European Union.

In the U.S., the wave of Islamophobia sweeping the country following the Paris attacks and the San Bernadino shootings is due in part to the disappearance of the antiwar movement, which in 2003 organized the largest single protest in world history, but went into decline in the U.S. a few years later because it couldn't figure out how to oppose the wars of a Democratic president who relies more on drones strikes and economic sanctions than ground invasions and "Mission Accomplished" bluster.

But after seven years of Obama's wars and seven years of Bush's wars, we have the rise of ISIS and the refugee crisis. When Obama gave a national address this month and said in essence that his current plan is working, he sounded, in his own way, just as disconnected from reality as Trump and the raving Republicans do.

There continues to be an audience for a radical alternative expressed in the Sanders campaign, in the large audience for explicitly anti-capitalist books like Naomi Klein's This Changes Everything and other examples. That audience needs to be connected to each other and existing left organizations, and further engaged on the questions we confront today.

This is the resistance in a year of fear. Building it will be critical in challenging the political atrocities and outrages of today--and rebuilding a left that can put forward an alternative in the years to come.