2018: #MeToo strikes and terror at the border

In part three of our series, Leia Petty describes the wave of job actions against sexual assault and harassment, and Lucy Herschel looks at how the terrible violence behind the euphemism “border enforcement” was revealed.

Leia Petty | The rage produced by gender-based oppression has always been there for so many of us, just beneath the surface, looking for an escape valve. On better days, the escape takes the form of shouting down a sexual harasser on the sidewalk. On others, we can take it out on each other or ourselves.

In 2018, our shared rage stopped being atomized. #MeToo developed far beyond a hashtag, taking shape in mass marches and a movement for gender justice that has been a long time coming. 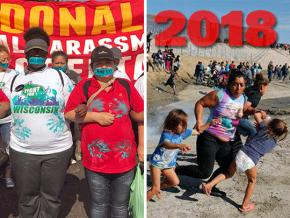 MeToo has collectivized and made public the otherwise isolating and individualized experiences of survivors; created a national conversation around sexual assault for the first time in my lifetime; brought down hundreds of powerful men; and exposed both the depths of the crisis for women and the layers of protection that these men received from the ruling elite in the political establishment, university administrations and boardrooms.

But most importantly, it has emboldened people to speak up and fight.

The year began with the second Women’s March, bringing hundreds of thousands to the streets once again. The protest’s official theme was Power to the Polls, but in 2018, the fight against sexism went way beyond that — most significantly into a number of labor struggles.

In 2017, union hotel housekeepers in Chicago won a citywide “hands off, pants on” ordinance protecting workers in an industry where an estimated 75 percent of housekeepers face sexual harassment. This year, a hotel strike wave followed.

McDonald’s workers in 10 cities walked out during their lunch shift on September 18 to protest their complaints of sexual harassment going unaddressed.

The strike had its roots among women workers who met one another when traveling to the annual shareholders meeting to tell their stories and then created the committees that organized the action. Organizers proclaimed it the first multistate strike against sexual harassment.

Then six weeks later, an incredible 20 percent of Google employees worldwide joined a walkout — brilliantly repurposing tools they had developed for the company to organize and promote the strike — to protest similar inaction and cover-ups of sexual harassment complaints. A week later, Google executives caved to a number of the workers' demands.

The increase in strikes led by women reflects an awakening and emboldening paved by both #MeToo and rising class consciousness. While they aren’t considered feminist strikes by many of their leaders and participants, socialists must recognize and help more people understand the interdependencies of gender and class inequity.

These developments weren’t confined to U.S. borders. In South America, Argentina saw massive protests demanding abortion rights from a conservative government, while the movements against sexual violence and for abortion rights were the cutting edge of the struggle against the rise of the right-wing and fascist forces around incoming Brazilian President Jair Bolsonaro.

In Europe, an incredible 5 million people took part in a two-hour strike on International Women’s Day in the Spanish state, and feminists in Ireland won a massive victory in a referendum that overturned forced birth laws and provides free abortion for all women.

A growing and emboldened right wing threatens the continued development of this feminist wave. This danger has only heightened in the past year with Bolsonaro’s election in Brazil, Trump’s attempts to revoke civil rights for transgender people, and U.S. fascists’ recruitment out of the anti-abortion movement.

But the simultaneous development of feminist consciousness and strikes means that the politics of socialist feminism can have a hearing in the coming year in ways that are unprecedented in my lifetime. For the third annual Women’s March, socialist and radical groups are coming together to plan joint contingents, teach-ins and actions in cities across the country.

Mainstream feminist organizations connected to the Democratic Party have abandoned our fight. So it’s up to us. Let’s remember 2018 as a year of strikes, protests and sexual abusers continuing to fall from grace. Then let’s prepare to fight like hell in 2019 for the future of socialist feminism.

The Violence of Borders Exposed

Lucy Herschel | The death of 7-year-old Jakelin Ameí Rosmery Caal Maquin after eight hours in immigration custody on December 8 marked a tragic end in a year of new lows in Donald Trump’s relentless war on immigrants.

The horrors taking place on the U.S.-Mexico border became a major flashpoint in 2018. This summer, images of children being ripped from their parents and warehoused in cages — their desperate cries literally broadcast to millions — galvanized some of the biggest pro-migrant protests in years and forced the Trump administration to back off from its official embrace of “zero tolerance” policies (though the number of children in detention continues to grow.)

The crisis this summer also revealed the horrific consequences of the bipartisan push to “secure the border” that predates the Trump era. Shocking pictures of children held in cages that filled Twitter feeds in protests of Trump were soon revealed to have been from the Obama years — and a May report from the ACLU detailed the systematic neglect and abuse of child detainees on Obama’s watch.

As thousands of Central Americans band together to flee violence and poverty stoked by a century-plus of U.S. military and economic intervention, the unfolding humanitarian crisis from Tijuana, Mexico, to Tornillo, Texas, exposes the violence inherent in the border security regime.

2018 also showed that the border is everywhere, and that the fate of new asylum-seekers can’t be separated out from the fate of immigrants of all statuses in this country, who all found themselves targeted by Trump’s scorched earth anti-immigrant attack.

Whether it’s the ICE raids on sanctuary cities and “sensitive” locations, efforts to end DACA and Temporary Protected Status for people who have built lives in the U.S. over decades, the “public charge” rule that’s spreading panic among legally present immigrants, or efforts to retroactively strip naturalize citizens of their status disturbingly named Operation Janus, the message from the White House is clear: No one is safe.

Trump’s entire political strategy rests on rabid xenophobia and anti-immigrant policies. For a brief moment, this approach seemed in danger, when mass opposition to his family-separation policy pushed even mainstream Democrats to publicly consider the growing demand to #Abolish ICE.

But the Democrats’ decades-long complicity in the border security regime makes it hard for them pose as a real alternative.

They ducked the issue in the midterm campaigns, leaving Trump’s ever-more racist rants unchallenged. Now Chuck Schumer and Nancy Pelosi are haggling with Trump, not about how to stop repressing asylum seekers, but about how much to spend on their repression.

There is no reason this has to be the case. A Gallup poll in June showed that not only do most Americans oppose Trump’s family separation policy, but a whopping 75 percent think that immigration is good for the U.S. That’s the highest number since 2001.

Throughout 2018, immigrant families and their allies fought back in protests big and small, and important solidarity efforts are currently being mobilized at the border. But for too long, illusory promises of relief for a limited number of “deserving” immigrants have served as a cover for a massive increase in monitoring, control and repression for all.

In 2019, we need a political movement that moves past this framework and defends the rights of all to migrate and work freely and without repression. The alternative is a continuation of the racism and violence — and many more children killed by borders.

2018: A cop goes to jail, nationalism and stolen votes