NEW YORK CITY--Civil rights leader Rev. Al Sharpton has called for civil disobedience protests on May 7 over the acquittal of three NYPD officers who killed 23-year-old Sean Bell in a hail of 50 bullets in November 2006.

Bell was killed and his two friends, Joseph Guzman and Trent Benefield, severely injured when detectives Gescard Isnora, Marc Cooper and Michael Oliver opened fire on the car the three men were sitting in, outside a nightclub where they had been celebrating Bell's planned wedding that day to his longtime fiancé and mother of their two children, Nicole Paultre-Bell.

The not-guilty verdict in the trial of the three officers, announced April 25, was greeted with outrage and protest in the following days. Last weekend, Sharpton--joined by Nicole Paultre-Bell and Trent Benefield--announced plans for continuing demonstrations to a packed room at the House of Justice in Harlem, the home of the National Action Network and Sharpton's weekly live radio show on WLIB.

The mood of the crowd was a mixture of anger, solidarity and a willingness to take action to attain the justice that has, time and time again, been denied by the courts. "I'm sick and tired of being sick and tired," said Hazel Dukes of the NAACP, using the words of the great civil rights activist Fannie Lou Hamer. 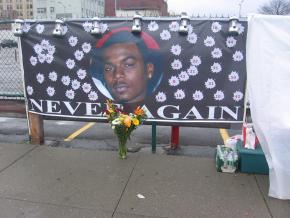 Rev. Lisa Jenkins suggested the rallying cry of those angered by the verdict should be Public Enemy's "Fight the Power." She then chided the press for obsessing over Rev. Jeremiah Wright for speaking the truth about racism, but staying silent when NYPD officers get away with murdering a young Black man.

A young woman stepped onto the podium and said that she was in the courtroom when the verdict was read, and at that moment, it hit her "what the civil rights movement was all about." An older man in the back of the room stood up and wept as he told the crowd that he had marched through Selma, Ala., and he still had to march today. "And it still hurts!" shouted a member of the crowd.

Sharpton then laid out the plan for a citywide day of civil actions and praying on May 7, starting at 3 p.m. "If they won't arrest the guilty in this town," said Sharpton, "they're going to have to arrest the innocent."

The locations of the gathering spots for protesters are: 125th Street and 3rd Avenue; 3rd Avenue and 60th Street; 34th Street and Park Avenue; Varick and Houston Street; One Police Plaza; and the House of the Lord Church in Brooklyn (415 Atlantic Ave.)

The actions are set to be peaceful pray-ins, and a number of participants are willing to risk arrest by engaging in civil disobedience. But you don't have to submit to arrest to participate in the gatherings.

Everyone outraged by the racist verdict in the Sean Bell case is encouraged to show their support for those being arrested, and let the city and country know that we won't let this injustice stand. What's our verdict? Guilty!