Making Iraq pay to be occupied

Eric Ruder reports on Democratic proposals to shift the burden of paying for reconstructing Iraq onto Iraqis.

SEVERAL U.S. senators are hopping mad about the immense amount of money that the U.S. government has spent to occupy Iraq.

And they have a plan to do something about it: Make Iraqis pay for the U.S. to occupy their country.

"It's obvious that there's a windfall that Iraq is experiencing, and it's at our expense," said Sen. Ben Nelson (D-Neb.), on National Public Radio's Marketplace on April 24. "They're generating a surplus at a time when--in large part because of our defense and our work on their behalf--we're generating a deficit."

Nelson and other Democratic senators, who consider themselves critics of the Iraq war, are using such arguments as a line of attack against George W. Bush, essentially claiming that the administration hasn't made enough demands on the Iraqi government and that the U.S. is spending too much on Iraq's reconstruction.

According to this upside-down narrative, the U.S., whose occupation devastated Iraq's infrastructure and economy, is the country's savior, while the Iraqi government is to blame for the lack of electricity and clean water. 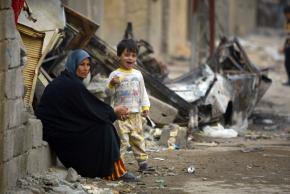 "Far from financing 'its own reconstruction' as the administration promised five years ago, the Iraqi government has left the U.S. to make most of the capital expenditures needed to provide essential services and improve the quality of life of Iraqi citizens," said Sen. Carl Levin (D-Mich.).

The high price of oil, which has perked up the bottom line of Iraq's budget, is fueling the ire of the Democrats. "We Vermonters are paying $3.50 and more for gasoline, and projections are it could go to $4 this summer and even beyond," said Sen. Patrick Leahy (D-Vt.). "There's just no way we can justify telling Iraq, when they have a huge surplus from their oil revenues, that they can't pay for some of their own reconstruction."

Joining the supposed "war critics" are supporters of the occupation, who see Iraq's budget, flush with oil revenue, as a potential slush fund for financing U.S. imperial efforts in Iraq and around the world.

In mid-April, "Joseph Lieberman (I-Conn.), asked Defense Secretary Robert Gates whether Baghdad should start paying some U.S. combat costs, and Lindsey Graham (R-S.C.) raised the possibility that an anticipated Iraqi budget surplus this year could be used to help Afghanistan, whose $700 million in annual revenue represents a small fraction of Iraq's $46.8 billion budget," according to the Associated Press.

At the beginning of May, the Senate Armed Services Committee blocked funding for Iraq reconstruction included in the Bush administration's latest war spending bill. Nelson says he is working on legislation to require the Iraqi government to pay for fuel used by U.S. forces and take over U.S. payments to predominantly Sunni fighters in the Awakening movement.

Difficult as it may be to believe, such proposals allow the Bush administration to appear more concerned about the welfare of Iraqis. "I think it's important that the Iraqis actually are spending a lot more on their reconstruction than maybe is commonly understood out there," White House deputy press secretary Tony Fratto told reporters.

IN TRUTH, Iraq has spent more than the U.S. on reconstruction. According to Anthony Cordesman, an Iraq expert at the Center for Strategic and International Studies, since 2003, $50.6 billion spent on reconstruction projects has come from Iraq itself, while the U.S. has spent $47.5 billion. "In short, we used more of their money for reconstruction than ours," Cordesman says.

The U.S. occupation has undermined the functioning of Iraq's governmental institutions from the beginning, in order to render Iraq more susceptible to the U.S. drive to impose neoliberal economic measures that make it easier for U.S. corporations to benefit in a postwar Iraq.

Then there's the corruption of U.S. officials charged with overseeing Iraq's reconstruction. "Indeed, investigations by U.S. departments and agencies have discovered billions of dollars in U.S. funds, including reconstruction funds, either missing, mismanaged or misspent in Iraq," according to United Press International energy editor Ben Lando. "And that's after more than 200 years of a (mostly) stable government here."

But with Democrats and Republicans agreed that Iraq should pick up the tab run up by U.S. forces in Iraq, the media uncritically echo the presumption that Iraqis have somehow taken advantage of the U.S. "Iraq's financial free ride may be over," reads the lead paragraph of an Associated Press report from mid-April.

CNN's Wolf Blitzer put the matter even more perversely on his blog. "U.S. lawmakers publicly are asking why the Iraqis themselves can't pick up the tab for their own reconstruction," he wrote. "Privately, several of them are going one step further--asking whether the Iraqis actually are playing the U.S. taxpayers for suckers."

Among lawmakers like Nelson, the argument is that the Bush administration should have issued loans to Iraq, instead of outright grants.

"If we'd been able to get the administration to back off blocking the legislation in '03 that would require Iraq to take money in the form of loans as opposed to grants...if we'd done that, $45 billion that the U.S. government has spent for reconstruction would be an IOU to the United States," said Nelson.

This is in contrast to the arguments of L. Paul Bremer, the former U.S.-appointed overseer of Iraq, who argued in 2003 that the international community should forgive Iraq's debts and the payment of war reparations by Iraq.

"I have to say that it is curious to me to have a country whose per capita income GDP is about $800--that'll be Iraq [when oil begins to flow at pre-war levels]--that a country that poor should be required to pay reparations to countries whose per capita GDP is a factor of 10 times that for a war which all of the Iraqis who are now in government opposed," said Bremer. "So I think there needs to be a very serious look at this whole reparations issue."

Thus, Democrats have become the most ardent advocates for plunging Iraq deeper into poverty while the U.S. continues its project of trying to control Iraq's oil wealth.

If the Democrats get their way, Iraqis, who face the daunting project of repairing the massive damage done since the invasion, will end up owing money to the very country that caused the damage.