Israel's 60th anniversary celebrations were designed as p.r. exercises to reinstate its victim status, but they failed miserably, starting with their keynote speakers.

SOUTH AFRICA'S white minority government was finally overthrown in 1993, after decades of Black popular and working-class resistance. That year, the Black majority democratically elected the African National Congress--previously derided as a "terrorist" organization by apartheid's imperial supporters, including the U.S.--to lead its government. Freedom fighter Nelson Mandela, having spent 27 years in a South African prison and reviled as an international terrorist, was reinvented in the Western press as an elder statesman.

Now the apartheid state of Israel fears it will meet the same fate from its own oppressed, and growing, Palestinian population.

While Israel's proponents continue to rhetorically claim that the Zionist state is the only bulwark against another Holocaust, its leaders also continue to openly express its true identification with South Africa's racist regime. Israeli Prime Minister Ehud Olmert remarked recently in the New York Times, "We now have the Palestinians running an Algeria-style campaign against Israel, but what I fear is that they will try to run a South Africa-type campaign against us." If international sanctions are imposed as they were against apartheid, "the state of Israel is finished."

Indeed, stripped of rhetoric, the parallels are striking. The state of Israel was enshrined as a sovereign state in 1948, the same year the white supremacist National Party came to power in South Africa. Both Zionism and apartheid had been decades in the making, with the backing of British imperialism. Both colonial projects were designed to violently disfranchise and subjugate the indigenous majority that occupied both countries.

Their methods, however, were different. While South Africa's white supremacists imposed minority rule over its vast African population, Israel intended to distinguish itself as the only "democracy" in the Middle East. This was accomplished by driving out Palestine's majority Arab population, thereby creating a Jewish majority. 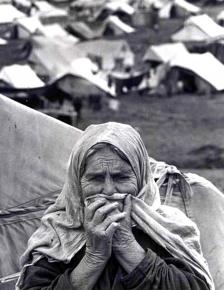 Armed Zionist gangs, including the Irgun, led by future Israeli Prime Minister Menachin Begin, and the Stern Gang, initially massacred 254 unarmed Palestinian men, women and children in the village of Dier Yassin. The terror spread to 40 other Palestinian villages as tens of thousands of Palestinians fled their homeland in desperation, with only their clothes on their backs. By 1949, Israel controlled 78 percent of Palestine and had driven approximately 750,000 Palestinians from their homes. They have never been allowed to return.

Times have changed. The majority of Palestine's Arab population is now hermetically sealed and relegated to sub-human status within Israel's occupied post-1967 borders. But what Israel fears most is the imposition of one person/one vote--destroying any claim to the "democratic" model so carefully engineered to give Jews a majority--should those borders ever reopen. If Israel were to return to a democratic, secular state, Palestinians will soon outnumber Jews.

The parallels of these two racially segregated regimes remain stunning. When South African anti-apartheid activist Archbishop Desmond Tutu visited the Occupied Territories in 2003, he described Palestinians' existence "much like what happened to us black people in South Africa."

ISRAEL'S 60TH anniversary celebrations were designed as a public relations exercise, intended to reinstate Israel's victim status. But they failed miserably in this regard, starting with their keynote speakers.

As George W. Bush's approval ratings plummeted lower than any president since Gallup began polling 70 years ago--including those of Richard Nixon before his forced resignation--the idiot president traveled to the Israel to join in the pomp and circumstance. Bush knew that in Israel, if nowhere else, his presence would be greeted enthusiastically, for Israel's colonial fate so closely overlaps with that of U.S. imperialism. On May 15, Bush shared a Jerusalem stage with his scandal-ridden Israeli counterpart, Olmert, in a bumbled effort to resurrect the moral authority of the increasingly discredited apartheid state of Israel.

The Israeli celebrations were marred by the tenacity of its occupied Palestinian population, which insisted on calling attention to its desperate existence at the receiving end of the Zionist project. Tens of thousands of Palestinians demonstrated in their largest numbers since the start of the second Intifada in 2000, inside and outside Israel's pre-1967 borders. As Bush spoke, he miraculously managed to ignore the plight of the Palestinian protesters assembled on the other side of the nearby separation wall, in the West Bank city of Ramallah.

Indeed, as Israel celebrated, the Gaza Strip lay in darkness on Saturday, May 10, with no fuel for its only power plant. Before Israel bombed this power plant two years ago, it was able to provide 100 megawatts of electricity; today, it provides less than half that amount. Israel has exacerbated the shortage of electricity by withholding fuel allowed into Gaza.

Israel's sweeping blockade of basic necessities has reduced Gaza's population to a "subhuman existence," according to a senior UN official. The World Bank estimated that poverty rates in Gaza stood at 67 percent in April, with the UN suspending food aid for four days due to a lack of fuel for its delivery vehicles. By these means, Israel has reduced the calorie intake of the Palestinians in Gaza, according to a UN report, to just 61 percent of the average daily requirement.

Lack of electricity has also drastically reduced drinkable water for the 70,000 Gazans who rely on wells using fuel pumps, while "60m liters of raw and partially treated sewage are being pumped straight into the sea every day," according to the Guardian newspaper.

In the West Bank, where Palestinians are caged in by 8-meter high separation walls, pass laws, curfews and 600 separate military checkpoints prohibiting their ability to travel even within the Israeli-occupied territories, Jewish-only settlements and roads have expanded to control coveted water resources and dominate roughly 40 percent of the land within.

B'Tselem, the Israeli Information Centre for Human Rights in the Occupied Territories stated recently, "The restrictions of movement that Israel has imposed on the Palestinian population in the Occupied Territories over the past five years are unprecedented in the history of the Israeli occupation in their scope, durations and in the severity of damage that they have caused to the three and half million Palestinians who reside there."

Between February 27 and March 3, Israeli troops murdered 106 Palestinians, including 54 civilian bystanders and 25 children. This year's death toll on May 12 numbered at least 312 Palestinians--197 of whom were unarmed civilians, including at least 44 children, according to the Palestinian Center for Human Rights.

Israel has justified its ongoing blockade and daily assassinations of Gazans as a legitimate response to the "violent takeover" of Gaza by Hamas. But Palestinians democratically elected Hamas to a majority in the Palestinian Authority parliament in 2006, verified by international observers. The violence ensued only after both Israel and the U.S. refused to recognize the results of this democratic election.

This uncomfortable fact negates Bush's claim to be bringing "democracy" to the recalcitrant Arab populations of the Middle East, so he did not mention it in his extensive speeches to Israeli revelers during his visit.

On the contrary, Bush called Israel a homeland for God's "chosen people," while claiming that European Jews arrived "here in the desert" in 1948, as if it had been an empty, unoccupied land. That same day, addressing the Israeli Knesset, Bush praised former Israeli Prime Minister Ariel Sharon as "one of Israel's greatest leaders" and "a man of peace."

BY REFERENCING Sharon (one of Israel's most blood-thirsty ethnic cleansers, lying blissfully in a persistent vegetative state since 2006), Bush unwittingly forced attention on Israel's conscious identification with South African apartheid since the 1970s. Following South Africa's example of moving its African population into segregated cantons without citizenship rights, Sharon infamously argued that "the Bantustan plan was the most suitable solution to [Israel's] conflict," as reported in Haaretz on June 18, 2007.

The Zionist regime was not deterred by the fact that apartheid leaders, including South African's violent Prime Minister John Vorster, were open Nazi enablers during the Second World War--because a similar system of racial segregation also suited the Israeli state. Like South Africa's apartheid regime, Israel sought to relegate its majority indigenous population to the status of non-citizen in their own homeland, through a combination of armed terror and racist segregation laws.

Israeli Prime Minister Yitzhak Rabin welcomed Vorster at a state banquet in 1976, noting the two countries' common fight against "foreign-inspired instability and recklessness." South Africa was more blatant in its government yearbook published a few months later, noting, "Israel and South Africa have one thing above all else in common: they are both situated in a predominantly hostile world inhabited by dark peoples."

As the Guardian reported in 2006, Alon Liel, former Israeli ambassador to South Africa described the relations between Israel and South Africa in 1976 as "a love affair between the security establishments of the two countries and their armies." He continued, "We created the South African arms industry. They assisted us to develop all kinds of technology because they had a lot of money. When we were developing things together we usually gave the know-how and they gave the money."

U.S. TAXPAYER dollars have funded Israel's war on Palestine since its inception 60 years ago. Since 1948, Israel has remained the largest recipient of foreign aid, with more than $108 billion from the U.S. government. Over the last 10 years, U.S. military aid reached $17 billion--including $2.4 billion this year alone--while Congress endorsed Israel's most recent assault on Gaza by a vote of 404-1.

It would be wrong, however, to conclude, as many do, that the "Israeli lobby" guides U.S. Middle East policy. On the contrary, Israel's most powerful lobby resides inside the Pentagon. The U.S. funds Israel for its own reasons in the Middle East, because it needs this well-armed and hostile combatant state, however unpredictable, that shares a similar interest in quelling Arab rebellions wherever they occur.

This is money well spent, as witnessed in January, when Palestinians swarmed the Rafah border into Egypt to buy basic necessities--and Egyptian riot police turned water cannons on the starving Palestinians. Despite the desperation of Gazans fleeing occupation, Egypt closed its border as soon as possible.

Yet the populations of neighboring Egypt, Lebanon and Jordan identify with the Palestinian struggle, even if their despotic leaders do not. Regional solidarity provides the eventual solution to the struggle for Palestine.

Israel's greatest fear, that Palestinians will outnumber Jews despite their careful engineering, will soon become a demographic reality. As former Knesset member Yossi Sarid noted recently, comparing Israel to South African apartheid, "One essential difference remains between South Africa and Israel: There a small minority dominated a large majority, and here we have almost a tie. But the tiebreaker is already darkening on the horizon...[T]he Zionist project will come to an end if we don't choose to leave the slave house before being visited by a fatal demographic plague."

As in South Africa, Israeli apartheid can only survive for so long before it is overthrown from below. Indeed, if Israel's current starvation tactic toward Palestinians, currently locked down in their future "Palestinian state," is any indication the Camp David solution is dead. Only a genuine democracy encompassed by one–person/one-vote, that Israel so fears, points the way for the future--in a single, secular state in which all citizens are equal, without regard to race or religion.