IT MAY be June, but Christmas came early this year for Big Brother and the telecommunications giants. Unfortunately, it is average Americans who will pay--dearly--on three separate counts.

First, precious constitutional and other legal protections against warrantless domestic surveillance have been shattered. The federal government may now secretly and legally eavesdrop on virtually any American's e-mail, cell phone and landline communications--without first getting a court-ordered warrant.

The second price that Americans will pay is by those who have been illegally monitored since 9/11. They will lose billions of dollars from dozens of anti-spying lawsuits pending against the likes of Sprint, AT&T and Verizon. These suits, covering the last seven years, will now be dismissed in a huge giveaway of immunity to the telecommunications lobby and big campaign donors. 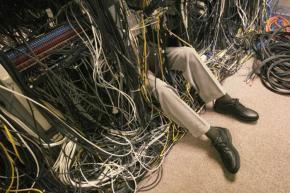 The lawsuits arose from the government's secret eavesdropping on American citizens, carried out since September 11 by Verizon, AT&T and others at the behest of the Bush administration, without court-ordered warrants--which until now had been legally required.

Third, Americans will be unable to discover the extent and details of the government's post-9/11 domestic spying operation, which barely came to light three years ago. That domestic eavesdropping campaign will now continue and expand further--with legal sanction--in the dark recesses of total secrecy. The new bill is a huge and blatant cover-up.

DEMOCRATS HAD claimed to be against the bill for months, but--as they did with the earlier USA PATRIOT Act--easily and completely capitulated. The new legislation received overwhelming bipartisan support in the U.S. House of Representatives on June 19; its imminent approval by the Senate is a foregone conclusion.

Reversing himself along with so many of his colleagues, Barack Obama gave fresh evidence of what can be expected of him if he wins the presidency.

In February--when he was running against Hillary Clinton--Obama said he "was proud" to stand against this bill's predecessor and its blanket immunity for the telecommunications companies' violations of individuals' civil rights. Four months later, no longer needing to position himself to the left of his former Democratic rival, Obama has revealed his real stance. He has announced he will vote in favor of the state powers and immunity for crimes and violations he so recently denounced.

At a time when Democrats are most ascendant--when Republicans, the war and bogus post-9/11 "national security" scams for gutting constitutional rights have been most discredited--Obama and "bipartisan" Democrats are giving the completely weakened Bush administration exactly what it wants. Why? There can be only one reason. It is what they want, too.

The new bill guts the post-Watergate Foreign Intelligence Surveillance Act (FISA), which was created in 1978 to require warrants from secret courts for domestic government spying in national security matters. These were created to curb blatant government domestic wiretap abuse, revealed by the Senate's Church Committee and others.

The Church Committee, convened in the 1970s to investigate government claims against domestic "terrorists," instead revealed a massive, secret official campaign of spying, sabotage, thug tactics, "dirty tricks" and criminal activity by the government against ordinary Americans. The secret surveillance and criminal sabotage were carried out especially against many thousands of movement activists--antiwar, civil rights, antiracist, left-wing and many other dissenters.

The eavesdropping, disruption schemes, blackmail, assaults, assassinations and other crimes were carried out by the CIA, FBI and many other government agencies, through programs like the infamous COINTELPRO (COunterINtelligence PROgram).

Mass popular opposition won victories that curbed government thuggery and spying against the American people and political activists. But longtime official efforts to rehabilitate such programs have used 9/11 as a cover for supposedly "temporary" measures against ostensible "terrorists" (most notably via the Patriot Act).

Those efforts have now succeeded in getting exactly what was wanted all along--permanent "legal" license to listen in on any American's communications at will, without meaningful "interference" or supervision from the courts, without the ability of ordinary folks to find out or challenge what the government is doing, and without recourse to legal remedies for what was previously known as breaking the law.

The demolition of civil liberties and human rights introduced at Guantánamo is coming home.