Randy Childs remembers the life of comedian George Carlin and his hilarious take on U.S. society.

ONE YEAR after the 1991 Persian Gulf War, George Carlin's cable television special "Jammin' in New York" debuted nationwide and revealed a sliver of the hidden truths of that war.

I was a high school senior in Omaha, Neb., when George Bush (the first one) launched his assault on Iraq on January 16, 1991. In just over a month, the U.S. military had killed tens of thousands of Iraqi civilians. I was against the war, and so were my mom and dad, my older brother, my uncle, my aunt and my grandmother. But we all believed that most Americans supported the war.

Can't build a decent car, can't make a TV set or a VCR worth a fuck, got no steel industry left, can't educate our young people, can't give health care to our old people. But we can bomb the shit out of your country all right!

Especially if your country is full of brown people...Iraq, Panama, Grenada, Libya, if you got some brown people in your country, tell them to watch the fuck out! Or we'll goddamn bomb them!

When's the last white people you can remember that we bombed? Can you remember any white people we've ever bombed? The Germans! Those are the only ones! And that's only because they were trying to cut in on our action. They wanted to dominate the world. Bullshit! That's our fucking job! 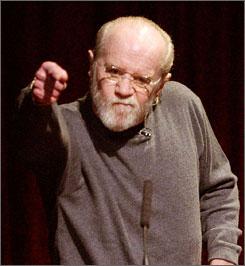 Supposedly, 95 percent of Americans supported the war from beginning to end, but the crowd was cheering wildly at Carlin's furious take on the U.S. war machine. I realized for the first time that there were many people who were against the war.

In fact, a short-lived but intense antiwar movement exploded in cities and on college campuses across the country in both the build-up to and the brief duration of "Operation Desert Storm." San Francisco had a mass demonstration of 100,000 people against the war. At the University of Iowa, over 2,000 people braved sub-zero February temperatures to march for hours.

Like most Americans, I heard nothing of these antiwar protests from the mainstream media. Carlin's show opened a window on the reality of mass opposition to the war that made me start actively looking for some kind of alternative to the way our society functions.

GEORGE CARLIN died June 22 of a heart attack. He did not, mind you, "pass away." Carlin's hatred for such euphemisms was a regular feature of his comedy.

Stand-up comedy is an art form (Larry the "Cable Guy" notwithstanding), and George Carlin was one of comedy's greatest artists. He spent years using his comedy to reveal social and political truths that you weren't going to hear about on the TV news.

Carlin was a prime example of how artists often reflect the contradictions of the society they live in, how they can be influenced by social movements, and how they, in turn, can have an influence on society.

At the peak of the radicalization of the late 1960s and early '70s, Carlin made headlines with his now legendary "Seven Words You Can Never Say on TV" routine. He was arrested for "obscenity" in Milwaukee in 1972 and was the subject of a five-year-long court battle with the Federal Communications Commission (FCC) that went all the way to the Supreme Court.

What were the censors afraid of? "You know the seven, don't you, that you can't say on television?" said Carlin. "Shit, piss, fuck, cunt, cocksucker, motherfucker and tits. Those are the heavy seven. Those are the ones that'll infect your soul, curve your spine and keep the country from winning the war."

Yet Carlin was continually being influenced by the women's liberation struggle, like he had been influenced by the antiwar and antiracist movements. While other themes of his comedy (opposition to war, critique of consumer culture, hatred for hypocrisy) survived to his death, the anti-feminist stuff faded away. His growing identification with women's liberation included fierce support of abortion rights:

Pro-life conservatives want live babies so that they can raise them up to be dead soldiers...These people aren't pro-life. They're killing doctors! What kind of pro-life is that? They're not pro-life. You know what they are? They're anti-woman! They believe that a woman's primary role is to function as a brood mare for the state!

Carlin's left-wing comedy had many highlights. And they're pretty much all on YouTube. Carlin's greatest weakness lay in his pessimism about human nature. He held all human beings guilty for the crimes of capitalism--especially those committed against the environment.

And living the last three decades of his life during the era of neoliberalism and the one-sided class war of rich against poor, he was not optimistic that human beings could figure out a way out of today's crises. He spelled out these feeling in the preface to his book Brain Droppings:

No matter how you care to define it, I do not identify with the local group. Planet, species, race, nation, state, religion, party, union, club, association, neighborhood improvement committee; I have no interest in any of it. My interest in "issues" is merely to point out how badly we're doing, not to suggest a way we might do better. My motto: Fuck Hope!"

Ironically, George Carlin's own inspiration and influence on me and countless others who today fight for "a way we might do better" proves that he was wrong to give up on human beings. We can best honor his memory by organizing against the horrors that he raged against on stage.

But seriously, you should also look up his stand-up act online. It's hilarious!