Alan Maass looks at the record of the man who Barack Obama tapped to be the head of his team of economic advisers.

BACK IN January, at one of the Democratic presidential candidates' debates, Barack Obama took one of his few open shots at Hillary Clinton's past as a shill for shady corporations. "While I was working [as a community organizer in Chicago]...watching those folks see their jobs shift overseas," Obama said, "you were a corporate lawyer sitting on the board at Wal-Mart."

It was a point that deserved to be made more often. Clinton's remade campaign image as a populist fighting for the "little guy" was in stark contrast to her long history as a fixture of the Democratic Party establishment and defender of corporations like Wal-Mart.

But maybe Obama had his reasons for keeping quiet about the Beast of Bentonville.

With the nomination finally in hand, Obama announced he was adding a team of political advisers straight out of the pro-corporate, pro-military mainstream of Clintonism.

And to head his economic team, he chose Jason Furman--best known to labor activists for writing a 2005 article defending Wal-Mart as a "progressive success story" and denouncing the efforts of union-backed groups like Wal-Mart Watch to expose the retail giant. 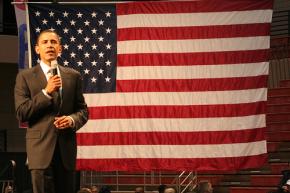 Furman's appointment was consistent with a series of right turns by Obama. The day after he claimed victory following the last Democratic primaries on June 3, Obama appeared before the American Israel Public Affairs Committee, where he committed himself to an undivided Jerusalem, which isn't even the position of the Bush administration. At a Father's Day speech, he renewed his blame-the-victim criticisms of Black men as being responsible for the problems of the Black community.

Of course, it's the common wisdom of Democratic Party leaders that their presidential candidate needs to move toward the "center" as a general election gets underway. But Obama--who did say, once upon a time, that he would be a different kind of Democrat--is seeming more and more like a car whose steering wheel is stuck in one direction: turning right.

On the issue of the death penalty, Obama likes to associate himself with the Illinois moratorium on executions declared by former Gov. George Ryan while Obama was still a state senator. At one Democratic debate, for instance, he talked about the "broken system" that "had sent 13 innocent men to death row."

There is no reason to believe that the justice system is any less broken when it comes to crimes other than murder--and Obama knows it. But he and his advisers apparently thought it was more strategic to sign up with the absurd attack on the Supreme Court for committing "abuse of judicial authority," in the words of Louisiana Gov. Bobby Jindal.

THE CHOICE of Furman to lead his economic team underlines just how far Obama is from the progressive icon his supporters believe him to be.

Furman is a protégé of Robert Rubin, the Wall Street banker who shaped Clintonomics in the 1990s to serve the pro-business, neoliberal agenda.

In 2006, Furman was selected to head the Brookings Institution's Hamilton Project, a think tank founded by Rubin to press for free trade and balanced budget policies. On the advisory council of the Hamilton Project are Rubin and fellow Citigroup executives, as well as prominent hedge fund bosses like Eric Mindich of Eton Park Capital Management and Thomas Steyer of Farallon Capital.

Obama was the keynote speaker at the ceremony launching the Hamilton Project. He praised its leaders for their willingness to "experiment with policies that weren't necessarily partisan or ideological."

No one would confuse Furman with a radical. In a Washington Post op-ed last year, he argued for a decrease in the tax rate on corporations, provided loopholes in the tax code are closed. "We should consider," he wrote, "tax reform in the classic 1986 mode"--that is, tax policy as defined under Ronald Reagan.

But Furman went above and beyond the call in a 2005 paper, titled "Wal-Mart: A Progressive Success Story," where he argued that the low-wage, no-benefit jobs created by the aggressively anti-union Wal-Mart were the price to pay so low-income Americans could have a place to buy goods at low prices.

As if the example set by Wal-Mart and emulated by other corporations wasn't one of the main reasons why U.S. workers have to scramble to find bargain-basement prices. By Furman's logic, every strike for better wages is a blow to the interests of the working class as a whole--and an injury to one must be a victory for all.

In a Slate.com debate about the tactics of groups organizing against Wal-Mart's abuses of workers and customers alike, Furman clearly delighted in using the same smears against liberals employed by the likes of Karl Rove.

"The collateral damage from these efforts to get Wal-Mart to raise its wages and benefits is way too enormous and damaging to working people and the economy more broadly for me to sit by idly and sing 'Kum-Ba-Ya' in the interests of progressive harmony," Furman wrote.

FURMAN ISN'T the exception, but the rule on a team of economic advisers to Obama that comes from, as author Naomi Klein puts it, "the left side of a spectrum that stops at the center-right."

For example, there's Austan Goolsbee of the University of Chicago (UC) economics department--though he's better known these days for having met with Canadian government officials to assure them that the Obama campaign's previous anti-NAFTA rhetoric "should be viewed as more political positioning than a clear articulation of policy plans."

The UC economics department, of course, is notorious as the home of Milton Friedman and the high priests of neoliberalism and corporate globalization. Goolsbee comes from the Democratic wing of the department, but he still worships the free market, and expects the same of the presidential candidate he supports. "If you look at his platform, at his advisers, at his temperament," Goolsbe said of Obama to one reporter, "the guy's got a healthy respect for markets."

As Klein pointed out in the Nation, the neoliberal dogmas of the "Chicago school" are increasingly discredited because of the damage they have caused--to the extent that "Friedman's name is seen as a liability even at his own alma mater. So why has Obama chosen this moment, when all illusions of a consensus have dropped away, to go Chicago retro?"

The question is the answer. For all his talk about change, Obama is showing in such actions his commitment to an economic program that is acceptable to Wall Street and Corporate America.