Elizabeth Schulte looks at the some of the veterans of U.S. war crimes past and present that Barack Obama is adding to his team of foreign policy advisers.

"I FEEL he is totally different." Those were the words of Naser Mahdi, a school teacher in Buquba, Iraq, on the Democrats' presumptive presidential nominee Barack Obama. "The world needs new blood in rulers," Mahdi told Inter Press Service, "and we hope that he might decrease the dominating authority of the United States."

Mahdi speaks for the millions of people, in the U.S. and around the world, who hope that Obama represents a new direction after eight miserable years of George W. Bush and his fellow warmongers.

But Mahdi and many others are in for a terrible disappointment--as Obama himself is making clear. On June 18, Obama convened the first meeting of his "Senior Working Group on National Security," a collection of advisers and possible future Cabinet members in a new administration--many of them former Clinton administration operators. Their record of war-making and imperial arrogance is enough to make your blood curdle.

Madeleine Albright: The price is worth it

IN 1996, CBS's Lesley Stahl asked Madeleine Albright, then secretary of state, about the U.S-imposed sanctions against Iraq. "We have heard that a half million children have died," Stahl said. "I mean, that's more children than died in Hiroshima. Is the price worth it?" 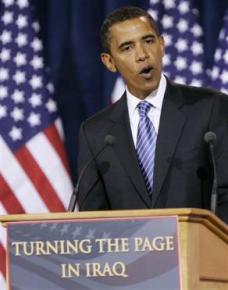 Albright didn't hesitate. "I think this is a very hard choice, but the price--we think the price is worth it," said Albright.

Albright advocated "regime change" in Iraq long before the Bush administration took power. It was during the Clinton administration that the 1998 Iraq Liberation Act was passed, making regime change offical U.S. policy and paving the way for Bush's invasion.

Albright was one of the architects of the U.S.-led NATO war on the former Yugoslavia, carried out under the cover of "humanitarian" concerns for the Kosovar Albanians. But the real purpose of the war was shown in 1999 negotiations in Rambouillet, France, with Serbian President Slovodan Milosevic, where Albright gave him an impossible choice--allow NATO troops unrestricted access or suffer the consequences.

Milosevic's refusal to surrender set the stage for a three-month bombing campaign that caused the deaths of some 2,000 Serbs and made conditions even worse for the Kosovar Albanians who the U.S. claimed to be protecting.

Albright was an ardent supporter of Hillary Clinton for the Democratic presidential nomination, but as the Washington Post reported, when "Sen. Barack Obama convened the first meeting of his new 'Senior Working Group on National Security'...he put Madeleine Albright at the head of the table."

BEFORE ALBRIGHT, Warren Christopher was Bill Clinton's secretary of state. The Clinton administration used the rhetoric of "humanitarian intervention"--the idea that the U.S. military would use its power to bring democracy and end the suffering of people in "less fortunate" countries-- to justify invasions of several countries.

"Humanitarianism" was the watchword of U.S. interventions in Somalia in 1992-93, Haiti in 1994 and the NATO war in the former Yugoslavia. In each case, the outcome of U.S. "help" was to make the situation even worse for the people of these countries.

In some cases, those suffering violence and oppression didn't event warrant the rhetoric of "humanitarianism." During Christopher's tenure, the Clinton administration specifically refused to use the word "genocide" to describe what was taking place in the African country of Rwanda--even though between April and July of 1994, some 800,000 minority Tutsis were killed in massacres.

Why? Because use of the word "genocide" would require the U.S. to take action--and in a clear display of American imperialism's double standards, the Clinton administration's conclusions were that the U.S. had no "strategic interest" for intervening in Africa.

As for Iraq, the Clinton administration inherited the devastating economic sanctions imposed by George Bush Sr. before the first Gulf War. When the pressure was on for the new administration to reconsider the sanctions, Christopher gave assurances no such thing would happen.

As incoming secretary of state, he told reporters, "I find it hard to share the Baptist belief in redemption.... I see no substantial change in the position and continuing total support for what the [Bush] administration has done."

Hundreds of thousands of Iraqis died as a result of the continuing economic blockade.

DAVID BOREN is--along with another of Obama picks for his foreign policy team, Sam Nunn--a former conservative Democratic senator. He was chair of the Senate Select Committee on Intelligence.

He helped push through the appointment of Robert Gates to head the CIA in 1991. "In his memoir, Gates thanked his friend, David Boren, for pushing through the nomination," journalist Robert Parry reported. "'David took it as a personal challenge to get me confirmed,' Gates wrote."

Boren's top aide at the time was George Tenet, who would later become director of the CIA under Clinton and later Bush the Younger. "David Boren," Tenet said in a 2003 speech, "is my lifetime mentor and friend--the man whose example of service and values I have chosen to follow. He taught me that when it comes to our nation's security, there are no Republicans or Democrats; there are only Americans."

True enough. Boren is hard to pin down on his political leanings--even though he is a Democrat, he's a longtime friend of the Bush family, and has also been courted by the right-wing Reform Party.

Lee Hamilton: One of the wise men

A 2006 article in the Chicago Tribune called Lee Hamilton one of America's "Wise Men...a storied but shrinking club trusted for the soundness of their advice and judgment, not for the favor that can be returned."

The fawning praise continued: "'Wise Men' are summoned at moments of national crisis, brought in precisely because of their ability to rise above partisan conflict in moments like the September 11 attacks and, now, the Iraq war. In both crises, official Washington turned to the same quietly resolute Midwesterner to make sense of it all: Lee Hamilton, a 75-year-old former Indiana Democratic congressman with a '50s-era brush cut and a clear-eyed appreciation for the hard realities of foreign policy."

In other words, to give the illusion of real debate and problem-solving where there is none.

The former chair of the House Foreign Affairs Committee, Hamilton co-chaired the Iraq Study Group, a bipartisan committee pulled together in 2007 in the face of growing opposition to the U.S. occupation of Iraq. Hamilton was also vice chair of the 9/11 Commission and the Iran-contra congressional investigation in the 1980s.

In other words, if there's a national security scandal, Hamilton can be trusted to serve on a bipartisan blue-ribbon committee to paper it over--and preserve the status quo in the long run.

During the hearings on the Iran-contra scandal--in which it was revealed that the U.S. government was covertly and illegally helping arm to the Nicaraguan contras to overthrow the democratically elected Sandinista government--Hamilton opted to stop the investigation before it reached President Ronald Reagan or Vice President George H.W. Bush, even though evidence existed that they might know about the scheme.

Hamilton explained later in an interview on PBS' Frontline that he didn't think it would have been good for the country for there to be another impeachment trial.

IT'S SAFE to say that William Perry, Bill Clinton's former secretary of defense, is one of the best friends the defense industry ever had.

A consultant for Martin Marietta immediately before joining the Clinton administration, he restructured the defense industry in a plan nicknamed "payoffs for layoffs" by Vermont Sen. Bernie Sanders, in which the government paid military contractors to consolidate. "Perry's Pentagon picked up the costs of moving equipment, dismantling factories and providing golden parachutes for top executives," wrote journalist Laura Flanders.

Previously, Perry served in the Carter administration as undersecretary of defense for research and development, where he pushed through the making of expensive high-tech weapons to counter the "Soviet threat."

He cleared the way for funding for laser-guided bombs, Cruise missiles, the Apache helicopter and the F-117 Stealth fighter. Perry also advocated for some of the most expensive defense boondoggles ever, such as the MX missile, the Maverick missile, the F-18, the DIVAD gun--and, of course, the B-2 Stealth bomber, with a price tag of $2.2 billion a plane.

After leaving Washington in 1998, Perry took a seat on the board of directors of Boeing.

Robert Gates: If it's not broke...

IT'S NOT a done deal, but rumor has it that Barack Obama might keep Robert Gates in his Cabinet.

Yes, that Robert Gates--the one who's currently defense secretary in the Bush administration and a leading light of the Republican Party.

Before taking over as supervisor of the Bush administration's war crimes in Iraq and Afghanistan, Gates served in the Reagan and Bush administrations, where the hard-line Cold Warrior was at the heart of several important intelligence operations.

Serving both in the CIA and at the National Security Council, Gates helped come up with a plan, later shelved, to topple Libyan leader Col. Muammar el-Qaddafi. He helped in arming the Saddam Hussein regime in Iraq so Iraq wouldn't lose its war against Iran, the U.S. government's main nemesis in the region at the time.

Gates also came up with a plan to bomb or invade Nicaragua, where the left-wing Sandinista government faced continual opposition in the 1980s from U.S.-backed counterrevolutionary forces. Gates had to settle for covertly arming the contras, whose war took the lives of some 58,000 people and crushed the Nicaraguan economy.

Richard Danzig, another one of Obama's advisers on national security, said, "My personal position is Gates is a very good secretary of defense and would be an even better one in an Obama administration."

Could the evidence be any clearer that an Obama presidency will have a lot more in common with the outgoing Bush administration than differences?