From politics of hope to politics as usual

Having raised expectations among his supporters during the primary campaign, Barack Obama is now systematically lowering them.

THE HEADY days of Obamamania have given way to one big Obummer.

Since securing the Democratic presidential nomination, Barack Obama has moved so far and fast to the right that even the Wall Street Journal could approve, with an editorial headlined "Bush's Third Term."

"We're beginning to understand why Barack Obama keeps protesting so vigorously against the prospect of 'George Bush's third term,'" the editorial said. "Maybe he's worried that someone will notice that he's the candidate who's running for it.

"Most presidential candidates adapt their message after they win their party nomination, but Mr. Obama isn't merely 'running to the center.' He's fleeing from many of his primary positions so markedly and so rapidly that he's embracing a sizable chunk of President Bush's policy. Who would have thought that a Democrat would rehabilitate the much-maligned Bush agenda?"

In the run-up to the Fourth of July holiday weekend, Obama's rightward moves came almost daily: Support for the FISA electronic surveillance bill providing immunity to telecommunications companies that illegally eavesdropped for the government. Embracing a right-wing Supreme Court minority that wants to impose the death penalty for crimes other than murder. Expansion of Bush's failed "faith-based initiatives" for social programs. Abandoning the publicly funded campaign finance system to escape limits on fundraising. Rejecting the idea that the "mental distress" of a woman should be an exception to bans on late-term abortions. 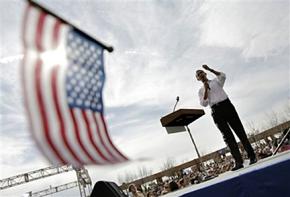 Next stop: Iraq. Obama's upcoming visit, he said, would help him to "refine" his position--that is, begin to wriggle out of proposals for a strict timetable for a withdrawal of U.S. combat troops.

Obama's handlers are selling his right turn as the "realism" of presidential politics. But many liberals are angry. "Senator Obama is not just tacking gently toward the center," wrote New York Times columnist Bob Herbert. "He's lurching right when it suits him, and he's zigging with the kind of reckless abandon that's guaranteed to cause disillusion, if not whiplash."

Thousands of Obama supporters are organizing around his own campaign's Web site to pressure him to vote against the FISA bill, and liberal columnists and bloggers are attacking Obama's new conservative positions.

Even the New York Times editorial board, normally a source of staid commentary about the importance of the political center, was incensed by Obama's shift. "We are not shocked when a candidate moves to the center for the general election," reads a recent Times editorial. "But Mr. Obama's shifts are striking because he was the candidate who proposed to change the face of politics, the man of passionate convictions who did not play old political games."

THIS MARKS a change from 2004, when liberals and the left lined up behind Sen. John Kerry, with virtually no complaints. Of course, most of those who criticize Obama today say they will still vote for him in November. But there is plainly more discontent this time around.

The reason is clear enough. Since 2004, the Republican project has crashed and burned. The wars in Iraq and Afghanistan are, at best, holding operations by an overstretched military, the unraveling economy has cut the living standards of tens of millions of workers, and people are fed up with a corrupt and incompetent government that combines Big Brother violations of civil liberties with cruelty and neglect on social issues.

All this should add up to a crushing Democratic victory in November in both the presidential and congressional elections. Obama has the political space to make bold proposals for turning around the economy, ending the war and much else besides.

Instead, however, he's chosen to repeat Bill Clinton's strategy of "triangulation"--tack to the right in order to co-opt his opponents' positions, while assuming the left will be dragged along anyway. Having raised expectations during a primary campaign notable for its huge, enthusiastic rallies, Obama is now systematically lowering them.

Particularly telling is Obama's endorsement of Bush's "faith-based initiatives." "The challenges we face today--from saving our planet to ending poverty--are simply too big for government to solve alone," he said at a news conference in Zanesville, Ohio. "We need an all-hands-on-deck approach."

Obama's comments are being presented as pandering to the religious right. It is partly that, but no one in the candidate's strategy team can seriously believe that the religious right, so thoroughly integrated into the Republican machine, will shift to Obama on this basis.

No, the real purpose of endorsing faith-based initiatives is to signal that an Obama administration won't be launching the kind of big social spending programs needed to overcome decades of conservative policy. Instead, Obama would like to funnel money to a patchwork of government-funded social work programs, run by non-profit organizations, many of them religiously based.

If such programs help build a political machine that helps the Democrats, fine. But the main benefit is it avoids creating popular "entitlement" programs like Medicare, Medicaid or Social Security, which politicians find difficult to cut because of pressure from constituents.

Essentially, Obama has accepted what Clinton told Congress after the Republicans' landslide victory in the 1994 elections: "The era of big government is over."

Yet with record numbers of people unhappy with the direction of U.S. society and the economy unraveling, there is an urgent need--and broad political support--precisely for "big government" initiatives.

High gas prices? A crash investment program to build--or rebuild--public transportation networks could begin to relieve pressure on working people, as well as create jobs for millions of construction workers idled by the housing crisis.

Rising mortgage defaults? A revival of the Depression-era Home Owners' Loan Corporation could refinance loans to keep people from losing their homes as interest rates rise and house value falls.

And with the looming recession likely to hit hard, government spending will be key to any recovery. As economist and author Robert Kuttner points out, "This downturn comes on top of three decades of stagnant or declining real living standards for about two-thirds of Americans, and increasing insecurity of employment, health insurance and retirement, as well as rising costs of housing, education and energy. So instead of a modest stimulus package, we need a major recovery program."

During his primary campaign, Obama gave the impression that his administration would take on such challenges. He evoked the imagery of social movements and promised far-reaching change.

Now, however, he has reverted to the norms of U.S. politics. His proposal to expand faith-based programs is little more than camouflage for his real intentions--or rather, lack of them.

At least Bill Clinton waited until after the November 1992 election before breaking his campaign promises. Obama seems to be canceling the honeymoon nearly five months before the wedding. If there's going to be "change" after January 2009, the initiative is going to have to come from people organizing to demand it.