Will the U.S. get its way with Iran?

Lee Sustar looks at the good cop-bad cop strategy that the U.S. and Europe are using to force Iran to abandon its uranium enrichment program.

THE U.S. is dangling carrots in front of Iran to suspend its uranium enrichment program--but only after smacking the Iranians with some increasingly big sticks in the form of sanctions.

After an inconclusive meeting over Iran's nuclear program involving high-level U.S and Iranian negotiators, the U.S. is pressing ahead with plans to squeeze Iran economically by making it increasingly difficult for Iranian banks and other companies to function in the West.

"The U.S. is fine-tuning new financial penalties against Iran that would target everything from gasoline imports to the insurance sector, and the prospect of such sanctions grew after talks over its nuclear-fuel program [July 19-20] made no progress," the Wall Street Journal reported.

"U.S. and European officials said they will intensify efforts to impose these penalties should their diplomatic drive fail to induce Iran to freeze its nuclear program. The sanctions effort could include measures to impede Iran's shipping operations in the Persian Gulf and its banking activities in Asia and the Middle East, the officials said." 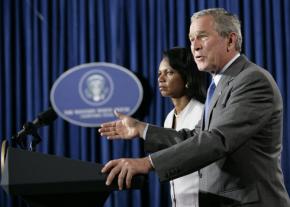 Iran currently endures UN sanctions for its efforts to enrich uranium, which can be used both for nuclear power and to build nuclear weapons. While the program isn't a violation of international law, the sanctions were imposed because Iran failed to provide the necessary notifications about its program, which Iranian President Mahmoud Ahmadinejad insists is for peaceful purposes.

After rattling sabers repeatedly--implying the possibility of military action by the U.S. or its proxy, Israel--Washington has toned down the bellicose rhetoric. But it is turning up the pressure of sanctions, and this is already having a serious impact. In late June, the European Union froze the assets of Iran's Bank Melli, added to a list of Iranian organizations with assets liable to being frozen, and barred 20 top Iranian nuclear officials from entering EU countries.

Next came the bombshell announcement by the French oil giant Total, which said it was pulling out of plans to invest in Iran's South Pars oilfield. In recent years, Total and other European companies had cashed in as U.S. sanctions on Iran sidelined their American rivals. But on July 10, Total boss Christophe De Margerie, "Today, we would be taking too much political risk to invest in Iran, because people will say, 'Total will do anything for money.'"

Sanctions could soon become tougher if Congress passes legislation that would bar from the U.S. any company that invests more than $20 million in Iran's energy industries. That would knock out many of the smaller contractors that provide crucial technology and skills to Iran's oil sector.

THE SANCTIONS come at a time of increasing economic problems in Iran. Despite record-high oil prices that have boosted economic growth, unemployment remains high. Despite government statistics showing a drop in joblessness to 9.6 percent from 11 percent a year ago, many economists estimate a real unemployment rate of about 20 percent.

Inflation is perhaps the most pressing economic issue. Government officials put the figure at 21 percent, but the actual rate may be closer to 40 percent. Even government statistics show price rises that are severe, especially in food and housing. According to the Central Bank of Iran, the annual inflation rate for food products hit 45 percent in early July. For rice, the inflation rate was 238 percent.

A state agency admits that in the southern province of Bushehr, food prices have increased between 70 percent and 100 per cent in just two months. And government inflation figures are understated, because they don't include the price of housing. In Tehran, house prices reportedly have increased up to 250 percent in recent years.

Iran's economic problems come despite the populist promises of President Mahmoud Ahmadinejad, who won election in 2005 in large part on pledges to improve the lot of Iran's poor and working-class majority. But his economic policies have failed to deliver much, even as a surge of revenue from high oil prices exacerbates social inequality.

The economic problems, as well as dissatisfaction over Ahmadinejad's hard-line foreign policy, have given his domestic political rivals new room to maneuver. The new speaker of the Iranian majlis, or parliament, Ali Larijani, recently launched a major attack on Ahmadinejad for his populist policies.

"The monopolization of economic activities and opportunities by the government...will create an inflationary economy which, in my opinion, is the worst form of injustice," Larijani said in June. "Unlike those who, in the early days of the Islamic Revolution, believed that the nationalization of the economy is more Islamic, experience has proven that nationalization leads to an ailing economy and promotes injustice."

The speech seems to signal a turn back to the pro-privatization, free market-oriented policies of reformers under the former president, Ayatollah Mohammad Khatami, who aggressively, and successfully, courted foreign investment, mainly from Western Europe.

But Larijani's speech is especially noteworthy because he was Iran's top nuclear negotiator until he was ousted by Ahmadinejad for being too conciliatory toward the West. He was rescued from the political dustbin by Iran's supreme leader, Ayatollah Ali Khamenei, who used his clout to install Larijani as speaker following parliamentary elections earlier this year.

Ironically, Khamenei had promoted Ahmadinejad during the 2005 elections in an effort to toughen up Iranian security to respond to pressure from the U.S. But in the parliamentary elections, Khamenei threw his weight behind Ahamdinejad's rivals. Now, on the nuclear issue, Khamanei has again undercut Ahmadinejad and his circle, this time by making favorable remarks about the potential for the Geneva negotiations, as has Foreign Minister Manouchehr Mottaki.

IT WAS these splits in the Iranian ruling class that apparently pressured Ahmadinejad into sending Iran back to the nuclear negotiating table.

Like George W. Bush, Ahmadinejad is increasingly seen as a lame duck, even though he's eligible to run for re-election next year. As a result, he's forced to take a more consensus-oriented approach to foreign policy--which means that if a strong section of Iran's ruling circle want to avoid confrontation with the West, Ahmadinejad is obliged to let it play out.

There's a similar dynamic at work in Washington, where foreign policy is increasingly set by the permanent U.S. State Department bureaucracy via Secretary of State Condoleezza Rice--along with the pronouncements of Democratic presidential candidate Barack Obama. "The judgments I've made over the past two years matched up with the realities on the ground," Obama said of the U.S.-Iran meeting in Geneva. "That's where U.S. foreign policy has to go."

Rice's approach has converged with that of the European powers--a ratcheting down of military threats against Iran in favor of concessions that require patience to achieve results. The deal was sealed during Bush's tour of European capitals in June and allowed the U.S. to create a united front of the other four permanent members of the UN Security Council--Russia, China, Britain and France--as well as Germany, in dealing with Iran.

The decision by the Bush administration to send a high-ranking State Department official to join European negotiators in talks with Iran over its uranium enrichment program was, predictably, denounced by hawks like John Bolton, the former U.S. ambassador to the United Nations. Until now, the U.S. had demanded that Iran renounce its nuclear program prior to any high-level talks.

The fact that the July 19-20 talks in Geneva came less than two weeks after Iran test-fired long-range missiles was particularly galling to neoconservatives. Thus, Michael Rubin of the right-wing American Enterprise wrote that "President Bush's reversal is diplomatic malpractice on a Carter-esque level that is breathing new life into a failing regime."

Certainly, the right wing is frustrated, having wagered that the occupation of Iraq would be a springboard for regime change in Iran. But while the U.S. is tied down militarily in Iraq, U.S. imperialism has many more weapons at its disposal to go after Iran--and the more patient approach is starting to get results.

Ironically, the right-wing analysis of U.S. failure is mirrored by some on the left, who have concluded that the U.S. policy toward Iran has failed completely. "The overall U.S. strategy of containing Iran has failed in principle," wrote Hannes Artens on the Foreign Policy in Focus Web site in an article headlined, "Iran Isolation Attempts Backfire." "And the attempt to impose a sanctions regime on Iran has led to an erosion of U.S. strategic influence in Asia and the Middle East."

Arten's evidence for this is the prospect of a gas pipeline from Iran through Pakistan and India, which, he argues, presages a "new geo-strategic axis--Tehran-Islamabad-New Delhi-Beijing" that will "radically reshuffle the power structure in Asia and, with it, the global balance of power."

But the actual construction of a pipeline is a long way off and could be derailed by India-Pakistan tensions, political instability in Pakistan itself, the threat of more sanctions from the U.S., and much more. Certainly, Iran will pursue any strategic counterweight to the U.S. that it can, but wishes and results are two different things.

In the meantime, the U.S. will use sanctions to lay siege to the Iranian economy, hoping to trigger a power struggle that would open the way to greater intervention later. And lest anyone think that sanctions are a humane alternative to war, consider the deadly effect of the economic embargo on neighboring Iraq during the 1990s.

While the threat of a military strike on Iran by the U.S. or Israel can't be ruled out, for now, Washington appears to be content to let the damage to Iran's economy accumulate in order to get what it wants. This is imperialist aggression by other means--and it must be opposed.