A worker at Chicago's Stroger Hospital looks at the latest SEIU raid on the rival CNA union.

THERE'S A union drive going on at the Cook County Bureau of Health that aims to get registered nurses to join the Service Employees International Union (SEIU).

Ordinarily, a union organizing drive would be cause for celebration. The problem with the SEIU union drive is that the nearly 1,800 nurses who work for Cook County are already represented by the National Nurses Organizing Committee (NNOC), which was founded by the California Nurses Association (CNA) in 2004.

Instead of focusing on the more than 1.9 million unorganized nurses in the U.S., SEIU has decided to organize a vote to decertify the NNOC, with the hope that SEIU would then be selected to represent nurses at Cook County. SEIU has poured significant resources into the campaign, sending SEIU RNs from other states to tour John H. Stroger Jr. Hospital--Chicago's main hospital that serves the poor. Recently, a free lunch was offered in an adjacent building so that nurses could talk one-on-one with the dozen or so staffers there. 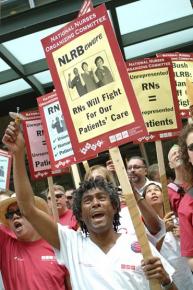 The question is, why is SEIU raiding a workplace already organized by the CNA/NNOC, when only 23 percent of the 2.5 million nurses in this country belong to a union?

Certainly there's an urgent need to organize nurses. The working conditions in many hospitals are near abominable. Besides being understaffed and overworked, many nurses have terrible benefits. Mt. Sinai Hospital, a private hospital a couple miles away from Stroger Hospital, which also caters to the poor and uninsured, is a case in point. Nurses there get one 30-minute unpaid lunch break per 12-hour shift, pay $300 a month for family health insurance, and, if they are ill, can't use their sick time until after they have used 24 hours worth of vacation time. Hospitals like this are clearly in dire need of organization.

Instead of an SEIU organizing drive at Mt. Sinai--which the NNOC earlier failed to organize--SEIU is trying to decertify NNOC at Stroger. If it comes to pass, it would be the second decertification vote in four years. In May 2005, the nurses at County Hospitals justifiably decertified the Illinois Nurses Association, and voted in the NNOC because of the poor representation they had been receiving.

The SEIU decertification attempt is problematic however, because the NNOC, has been an effective force for nurses at Stroger. Moreover, the current nurses' contract expires November 30, 2008. Thus, resources that the NNOC could be spending towards organizing a fight to win a decent contract are wasted on explaining why SEIU is attempting to move in. Moreover, SEIU Healthcare Illinois & Indiana represents almost 2,000 other health care workers at Stroger Hospital, and their contract expires at the same time. The raid on the CNA leaves one to wonder where SEIU's priorities lie.

The argument being put forward by SEIU is that if the nurses were to join them, then their bargaining power would be even stronger. SEIU Healthcare Illinois & Indiana was created through a merger of SEIU Locals 4, 20 and 880, which together represent 90,000 health care workers across the two states. This is typical of the mega-mergers of SEIU locals that have created unaccountable bureaucracies and helped spur a pro-democracy movement in that union.

While having one union representing almost all of the health care workers in one workplace is very a compelling idea, in this instance it has to be questioned because of the dubious motivations involved. The situation at County Hospitals is another battle in the war between the CNA/NNOC and SEIU, which has been going on for years now.

A major flash point was an effort by SEIU to organize nurses at a network of Catholic hospitals in Ohio earlier this year. The CNA/NNOC intervened, protesting the fact that the union and management agreed to a special procedure to hold the election without an organizing drive and a ballot that would exclude the CNA from consideration. The controversy was used by SEIU to justify a violent attack on the Labor Notes conference to "protest" a scheduled appearance by a CNA speaker.

Underlying this war is a debate about which way forward to organize workers. SEIU has been known to make deals with the bosses in order to facilitate their organizing efforts. In California, SEIU was forced to cancel a "partnership" agreement with nursing home owners after it was revealed that the union had agreed to help the industry lobby for more money from the state legislature in exchange for the right to organize. In return, however, SEIU agreed to impose a gag order on workers who wanted to speak out about the poor quality of patient care, and accepted contracts that limited their pay increases and provided for only weak union representation.

By contrast, the NNOC uses more militant tactics when it comes to organizing. The union set two strike dates when it negotiated its first contact with the Cook County Board in 2006, and was successful in significantly increasing pay for nurses.

The difference in approach for current negotiations at Stroger is also apparent. The NNOC organized an election of working nurses to make up its bargaining committee. But SEIU members had to fill out an "application" to join the bargaining committee. The union's elected officers then reviewed the list and hand-picked members of the team.

For its part, SEIU charges the CNA/NNOC with an elitist approach to organizing. And it certainly could be argued that because the NNOC only organizes nurses, and not entire workplaces, this strategically weakens their ability to put up a united front against the boss. Yet it is certainly not clear that the nurses who work for Cook County would be better off by joining forces with SEIU, as evidenced by the SEIU's history of cooperation with management. Decertifying the NNOC would be a step backward for nurses at Stroger.

At the end of the day, the biggest loser in this war between unions has been unorganized nurses. While dues money is senselessly spent on inter-union battles, nurses who have no unions continue to suffer.

Nurses are the single biggest section of health care workers, and for the sake of their health--and the health of their patients--they need to be organized.