The fight between the Clintons and Obama wasn't over principle or ideology, but over power within the Democratic Party.

TO EVERY pundit, it seemed, the back story of the Democratic convention was the battle between Barack Obama and the Clintons, both Hillary and Bill.

Would the Clintons endorse Obama? Would Hillary throw her support behind him with sufficient enthusiasm? Would Bill Clinton say Obama was ready to be president? Do the Clintons secretly want Obama to lose so that Hillary can run again in 2012?

Like much of what passes for political news in these settings, it was all little more than rumor and innuendo, with the gaps filled in by coverage verging on entertainment reporting from reporters who were largely ignorant of the real questions at stake in the U.S. today.

Ultimately, in what should have come as no surprise to anyone, Hillary Clinton endorsed Obama in a strong speech that even included an extended quotation from Underground Railroad conductor Harriet Tubman. (Had she spoken like that during the primaries, she probably would have ended up as the nominee!) Bill Clinton played his role on the following night, giving Obama the seal of approval from a former president.

All this shouldn't have been a surprise because the Obama and Clinton camps had been choreographing all of this for weeks in their negotiations over the convention agenda.

So was the Clinton-Obama conflict for real or all media-fanned hype?

What was real about it was the fact that Obama and Hillary Clinton engaged in the closest and hardest-fought presidential primary ever, and ended up just about tied in the number of popular votes they received.

Obama knocked Clinton from her perch as the Democratic Party's self-anointed candidate, a fact that sent the Clinton team into a panic. As The Atlantic's Joshua Green documented with the help of more than 100 internal memos, the Clinton campaign retooled itself, turning sharply negative against Obama when it perceived that his early showing had dented Clinton's perceived strength, particularly among white men.

In a strategy memo issued in March, Clinton adviser Mark Penn called on the campaign to "Target each state according to its type--we have several big working class and older states like PA and WV; we have southern states like KY and NC...Each of these now has a basic campaign type we can build on--economics in PA and WV, stress commander-in-chief in southern states..." 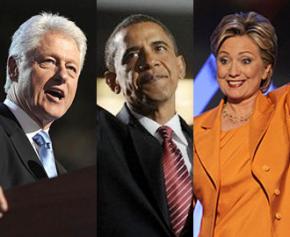 What was born as an improvisation to regain some footing against Obama turned the millionaire former first lady into a whiskey-shot-downing, working-class heroine. The idea that Clinton stood for (as she herself said) "hard-working white Americans" while Obama played to the "limousine liberals" of New York's Upper West Side and the Hollywood set was an artifice of a flailing campaign.

Apparently, Clinton refused to go the full measure of where Penn wanted to guide her early on--to characterize Obama as "foreign" and out of the mainstream. But her attacks on Obama, and the roads not taken as revealed in the leaked memos, have provided John McCain with plenty of fodder.

BUT IN the end, do the Clintons and Obama really represent anything different?

Throughout the primary campaign, Clinton and Obama held virtually identical positions on the issues. Some differences between them were so arcane that it was difficult to define them clearly (their differences on health care policy) or seemed to be cooked up for short-term political consumption (their differences on a "gas tax holiday" in the weeks before the Indiana primary).

Crucially, Obama and Clinton did differ on their attitude to the Iraq war. Clinton voted to authorize the war and never repudiated that vote. Obama, who had the good fortune not to have to take a stand on the war, opposed it. But on every vote but one since Obama joined Clinton in the Senate, they voted the same way on the war--including continuing to fund it.

When one looks at the roster of Clintonites or former Clintonites who are Obama's advisers or staff members, it's hard to tell whether Hillary or Obama is the true inheritor of Bill Clinton's "legacy." As John R. MacArthur, publisher of Harper's magazine, explained in an astute interview with Democracy Now's Amy Goodman, Obama was an astute student of the Clintons:

Bill Clinton really pioneered corporate fundraising on a level with the Republicans. He did this by, of course, supporting NAFTA and free trade agreements that made big American corporations happy--international financiers, commercial banks, investment banks and so on. And what Barack Obama has done is to copy the Clintons.

McArthur went on to quote passages from Obama's book, The Audacity of Hope, which in essence told big business, in McArthur's words, that "you have nothing to fear from me. Contribute to my campaign. I'll be just as good on free trade as Hillary Clinton."

With that in mind, was it any surprise, as McArthur pointed out, that of the top 20 corporate contributors to Obama's and Clinton's campaigns, 11 of them were the same? Even the right-wing media mogul Rupert Murdoch, split his contributions between the two.

The fight between the Clintons and Obama wasn't a fight over principle or ideology, but over power inside the Democratic Party. "It's like two corporations trying to merge, and one of the corporations doesn't really want to be taken over," McArthur told Goodman. "The Clinton corporation is hoping, really, that the Obama corporation will bankrupt itself and fall apart, and that they can resume their drive for power in four years."

Only time will tell if McArthur is right. But for now, the Clintons have to live with the fact that, after a long proxy fight, Obama is the chairman of the board.