Oppose Obama? How dare you!

Joshua Frank, co-editor of the Dissident Voice Web site and co-author with Jeffrey St. Clair of the collection Red State Rebels, analyzes the case made by progressives for voting Democratic.

INCREASINGLY, PROGRESSIVES I talk with admit they are starting to get a little disgusted with the antics of Barack Obama, that great agent of change. It wasn't too long ago that these same folks were overly optimistic Obama would deliver on his varied promises, beckoning a new era of Washington politics. Nonetheless, they all plan on voting for the Democrat regardless of how dismayed they have become with him and his campaign.

Of course, this isn't the lofty hope their candidate has been talking about. After eight long years of George W. Bush and Dick Cheney, it's been a logical reaction, one that the Obama camp has done its best to exploit. But as Obama shows his constituents that he is far from progressive, the less likely he is to walk away with an electoral victory come November, and the more doubtful it is that he will make any real progress if elected.

It's a pretty straightforward equation: centrist Democrats don't have a great track record of winning national elections. Voters want straightforward, common-sense approaches to handling the problems our country faces today, not posturing and political maneuvering for the sake of manipulation. 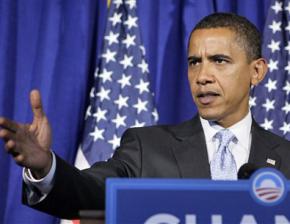 For what it's worth, John McCain shoots straight. He supports more war and doesn't know much about economics. Voters know exactly what they are getting if they punch the card for the old Arizona senator.

That's not the case with Obama, who says he wants an end to the war, but has voted for its continuation and will leave troops and private mercenaries in the country to deal with the so-called insurgents--even threatening to shift U.S. forces to Afghanistan and Iran, where he's promised to bully our enemies into submission.

Obama says he supports our civil liberties but voted to reaffirm the Patriot Act and FISA. He says he will expand the Pentagon budget, and on Israel, he promises to do whatever it takes to protect the country from "terrorists," paying little to no attention to the plight of Palestinians and their suffering in Gaza.

The good senator also wants to put Americans to work with a neo-Keynesian economic plan, producing millions of "green jobs" across the country. Our addiction to foreign crude surely needs to be dealt with, but Obama's call for diversified energy sources includes some not-so-great alternatives, such as nuclear power, clean coal and more domestic oil production.

Obama also claims to speak for the underprivileged but has refused to support a cap on credit card interest rates and has spoken little about the ruthless prison industry, the war on drugs or the death penalty--all of which unfairly affect the poor.

I WOULD call all of these postures a huge betrayal. But they aren't. Obama has never been a true progressive. He's another centrist Democrat who has done his best to appease all sides of the political spectrum; giving the corporate wing the hard evidence they need to trust he'll protect their interests, and the left wing rhetoric and political bravado to ensure they won't flee from the stifling confines of the Democratic Party.

Nevertheless, many Obama supporters know his pitfalls well, and no matter how disastrous they may seem, they'll still vote for him. As respected columnist Norman Solomon recently claimed:

To some, who evidently see voting as an act of moral witness rather than pragmatic choice (even in a general election), forces such as corporate power or militarism are binary--like a toggle switch--either totally on or totally off. This outlook says: either we reject entirely or we're complicit...

Such analysis tends to see Obama as just a little bit slower on the march to the same disasters that John McCain would lead us to. That analysis takes a long view--but fails to see the profound importance of the crossroads right in front of us, where either Obama or McCain will be propelled into the White House.

Solomon, who served as an Obama delegate at the convention in Denver and sits on the board of Progressive Democrats of America, has an agenda: to usher Barack Obama into the White House because he sees John McCain as leading our country closer to the sacrificial ledge.

"Save the Country (read Empire), Vote Democrat" has become a common refrain among a certain segment of the left, one that echoes through progressive and even radical circles every four years like clockwork. Go ahead and acknowledge their faults, they sing from on high, just don't you dare ditch the Democrats come Election Day, for the rapture will ensue.

Like others of his stature, Solomon has, in the past, dished out scare tactics in an attempt to threaten progressives into voting against their own interests, an approach not too unlike the Republicans who consistently undermine the concerns and needs of their base.

One typical threat that is often levied with fury is the prospect of future Supreme Court nominations.

No question the most recent selections to the Court depict a rabid right-wing shift; just don't forget that it was the Democrats who overwhelmingly confirmed both John Roberts and Samuel Alito, despite the collective power to halt their confirmations. And remember, the two best judges serving today, John Paul Stevens and David Souter, were nominated by Gerald Ford and G.W.H. Bush, Republicans both.

Barack Obama will not address progressive issues because he knows quite well he'll have this segment of the voting block shored up, no matter how far right he may turn. If one follows the Solomon line of logic, we will all just have to wait until Obama's inauguration to pester him to the left. If you do it now, they assert, it will only embolden John McCain.

Such a political philosophy (bigotry) is void of historic truths. One need look no further than Clintontime to grasp the amount of abuse the Democrats are allowed to commit because they are not Republicans. It's the political version of the battered wife syndrome. Once Democrats are elected, and things don't change, progressives are still silent.

And Clinton's legacy is a long, ugly list of betrayal indeed: NAFTA, welfare reform, the Antiterrorism and Effective Death Penalty Act, the Iraq Liberation Act, the Salvage Rider and the shattering of Glass-Steagal, which is greatly responsible for the current market meltdown.

So don't fear standing up and voting for what you believe in, no matter how fringe or foolish you are made out to be by others who claim to know better than you.

Our democracy is in peril. War rages on. Jobs are scarce, and the environment is being destroyed at an exponential rate. Voting on the likelihood of perceived social gains in the short-term is not only erroneous; it is without a true understanding of what it is going to take to bring about real change in this country.