Why the panic won’t stop

SO MUCH for that $700 billion bailout that was supposed to save world capitalism.

It began in Asia, swept through Europe and sent Wall Street's main stock indexes into a freefall, though a late bounce-back limited the losses. Even so, the Dow Jones Industrial Average dropped below the 10,000 mark that it first crossed in 1999, finishing at 9,665. Overall, the decline erased $2.5 trillion in stock market value worldwide, according to Bloomberg News.

Bad as the stock markets losses are, the really ominous financial news is about the credit markets--or rather, the lack of them. Banks, unwilling to trust their rivals' balance sheets and shaken by losses in their own holdings, are hoarding cash and refusing to lend to one another. As a result, central banks like the Federal Reserve have become what the Financial Times called "lenders of only resort." 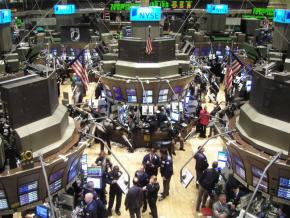 Compounding this credit crisis is a virtual halt in the market for "commercial paper"--the term for short-term loans taken out by major corporations to finance everyday needs like paying for supplies and making payroll.

This latest severe phase of the ongoing credit squeeze is the result of the September 14 bankruptcy of the Wall Street investment bank Lehman Brothers, which has tied up hundreds of millions of dollars claimed by hedge funds and led to a legal battle over an estimated $1 trillion in transactions of derivatives--complex financial investments that are based on, or "derived" from, an underlying bond or other security.

Lehman's central role in international credit markets meant that its bankruptcy had wide knock-on effects, including the near-seizure of money-market mutual funds until the Federal Reserve Bank stepped in to guarantee them.

This credit crisis won't be alleviated by Treasury Secretary Henry Paulson's TARP--or "cash for trash," as its critics rightly call it.

Under TARP, Paulson will have virtually total control over $700 billion in taxpayer money to buy up mortgage-backed securities and other devalued (or worthless) paper from banks and other financial institutions. Paulson claims that this massive and unprecedented theft of workers' wealth will shore up the banks' balance sheets, which will enable them to resume normal lending...eventually.

But while Paulson spends the next few weeks hiring Wall Street pros to carry out the program--yes, the very same people who created this catastrophe--the credit markets are imploding right now, and threatening to set off a far bigger crisis than we've seen so far.

THE LATEST panic led to frantic efforts by the Federal Reserve Bank to expand its ability to lend to banks. Fed Chair Ben Bernanke recently doubled the so-called Term Auction Facility lending program for banks to a staggering $900 billion, which is about the same as the Fed's entire balance sheet. And the Fed will also begin paying interest rates on deposits from other banks to further inject liquidity into the system.

Yet no matter how much and how cheaply the banks can borrow from the Fed, they're still refusing to lend to each other for fear of getting hit with huge losses in the event of another bank failure. And the non-bank financial institutions that comprise an unregulated shadow banking system aren't even eligible to borrow from the Fed.

Consequently, short-term interest rates on so-called interbank loans have shot up in both the U.S. and Europe, and the commercial paper market for corporate loans is barely functioning. New York University economist Nouriel Roubini summed up the crisis this way:

In this context, Paulson's $700 billion bailout scheme appears, as the New York Times put it, "like a pebble tossed into a churning sea."

The Fed and the European Central Bank (ECB) will try to alleviate the crisis through various means--perhaps with a coordinated cut in interest rates to further stimulate lending.

Such measures won't do the trick, however. The problem is that the financial dominos keep falling beyond the reach of the central banks and other government institutions. And in the case of Europe, the crisis is exacerbated by the fact that while the European Union has a common currency and integrated economy, there is no central regulatory authority, let alone federal government, to make a coherent intervention.

Consider Fortis, the trans-European bank created with a record $101 billion buyout of ABN Amro a year ago. In the current crisis, Fortis, with 85,000 employees and operations in 50 countries, couldn't handle the debt it took on from that merger, and looked to European governments for a bailout.

But the Dutch government, nervous about a collapse of the bank, refused to wait for a deal and nationalized the Dutch portions of the company. The remainder was bought up by the Belgian and Luxembourg governments, which sold off what was left to the French bank BNP on October 6.

At the same time, the German government had to step in with a $67 billion bailout for Hypo Real Estate after private lenders abandoned an earlier $48.2 billion dollar plan to prop up the company after trouble at one of its subsidiaries.

To try to stem fears of more bank failures, European governments acted to reassure depositors. The Irish government announced that it would guarantee all deposits in the country's biggest banks--and did so without consulting the European Union.

The head of states in the four major EU countries criticized Ireland for taking unilateral actions at an October 4 meeting near Paris. Yet Greece soon followed Ireland's example. Moreover, the government of Germany, the economic heavyweight of Europe, refused a French proposal for a coordinated European solution to the crisis, and instead promised guarantee all German bank deposits. Earlier, Britain had raised the insurance on deposits from $62,000 to $88,500, lest nervous depositors move their money to Irish banks.

If these deposit guarantees were intended to reassure financial markets, they had the opposite effect. The rush by European governments to back up deposits led investors to conclude that the banks were even worse off than anyone thought. The result was the worldwide stock market selloff October 6.

LURKING BEHIND the international banking crisis, of course, is the continued impact of mortgage-backed securities, which have already caused hundreds of billions of dollars to be wiped off the balance sheets of banks worldwide.

In the U.S., Paulson's TARP program will try to alleviate these losses by allowing banks to sell those securities for far more than they are worth. To pull this off, the bailout legislation passed by Congress allows the elimination of the so-called "mark-to-market" accounting rule, thus allowing banks to value their assets far above the price they would get in the open market.

Since there's virtually no market for mortgage-backed securities now, the banks' balance sheets must reflect huge losses under mark-to-market rules. Soon, however, the government will wave a magic wand to allow banks to peg those assets at much higher prices, and Paulson will pay that inflated amount with your tax dollars.

For their part, European banks don't have to operate under mark-to-market rules. Thus, their books are even more suspect than their U.S. counterparts. As a result, the Financial Times noted, "few are now willing to lend to European banks, not least other European banks."

So just as the credit crisis forces European banks to acknowledge the extent of their problems and seek government intervention, the U.S. government stands ready to help American banks cover up their losses by blessing dishonest accounting and buying up the worst junk on their balance sheets.

This approach isn't likely to restore confidence in the banking system anytime soon, let alone revive the credit markets. A more direct and effective solution, wrote economist Willem Buiter in the Financial Times, would be to "nationalize the banks. When they have a common majority owner (the state), the state can simply instruct the banks to lend to each other. Problem solved."

Such measures, however, aren't likely without much greater political pressure from below--and a wider challenge to the system that created this disaster.