The low road of racism

With nothing positive to offer, and sinking fast in the polls, the McCain campaign is turning to a tried-and-true tactic.

WHEN ALL else fails, there's always bigotry.

That sums up the direction of the John McCain-Sarah Palin presidential campaign as the final four weeks of Election 2008 get underway, with Barack Obama starting to pull away in opinion polls.

"[W]e have no choice," an anonymous McCain strategist admitted to the New York Daily News. "If we keep talking about the economic crisis, we're going to lose."

And so, the one-time whisper of right-wing kooks that Obama is really a secret Muslim who hates America--and especially white people in America--has become much louder, all with a wink and a nod from the McCain campaign, and sometimes more.

Never mind that Obama was a child when Ayers was protesting the Vietnam War. Or that Ayers has long since repudiated the Weathermen's violent tactics--though not, to his credit, his wholehearted opposition to the barbaric U.S. war on Vietnam--and is today a respected supporter of progressive and Democratic Party causes in his hometown of Chicago. 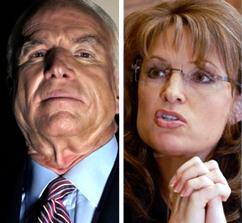 At an appearance in Clearwater, Fla., Palin told the crowd that Obama sees America "as imperfect enough to work with a domestic terrorist who tried to kill his own people...This is not a man who sees America as you see America and as I see America."

For his part, McCain went for a slightly subtler approach. "My opponent's touchiness every time he is questioned about his record should make us only more concerned," an irritable McCain told a crowd in New Mexico earlier this week. "It's as if somehow," he continued, "the usual rules don't apply, and where other candidates have to explain themselves and their records, Senator Obama seems to think he is 'above' all that."

All the tried-and-true code words, used many times over the past three decades, are there--McCain was playing straight to racist resentments against African Americans for supposedly enjoying special rights and advantages. In this, it should be noted, McCain was following an avenue of attack opened up by Hillary Clinton, who, during the Democratic primaries, claimed to represent "hard-working Americans, white Americans."

Predictably, the audience at McCain-Palin rallies not only got the message, but delivered one of its own.

In New Mexico, when McCain at one point asked rhetorically, "Who is the real Barack Obama?" a member of the audience yelled out, "Terrorist!"

In Florida, when Palin was denouncing Obama for his association with Ayers, "a domestic terrorist and part of a group that...launched a campaign of bombings that would target the Pentagon and our U.S. Capitol," someone shouted out, "Kill him!"

As the Washington Post's Dana Milbank noted, even "Palin's routine attacks on the media have begun to spill into ugliness. In Clearwater, arriving reporters were greeted with shouts and taunts by the crowd of about 3,000...Palin supporters turned on reporters in the press area, waving thunder sticks and shouting abuse. Others hurled obscenities at a camera crew. One Palin supporter shouted a racial epithet at an African American sound man for a network, and told him, 'Sit down, boy.'"

Naturally, McCain's campaign claims it isn't responsible for the people who attend its events--just as it regularly renounces speakers on the platform with the candidates who insist on referring to "Barack Hussein Obama."

That shouldn't fool anyone. With nothing positive to offer, and sinking fast in the polls because of the disastrous economy, the McCain campaign has plainly decided to turn to racism, both coded and overt--and that inevitably gives confidence to a core of bigots.

AT THE October 7 presidential debate, McCain stayed off the racist low road, and Obama obliged him by avoiding any reference to the smear campaign. But even the mainstream media recognized that the McCain-Palin campaign's latest strategy has "gone far beyond the usual fare of quotes taken out of context and distortions of an opponent's record--into the dark territory of race-baiting and xenophobia," in the words of the New York Times.

If Republicans are trying to exploit racism against Blacks more indirectly, they're prepared to use straight-out scaremongering about Arabs and Muslims.

GOP speakers and officials are questioning Obama's connections to Palestinian activists Rashid Khalidi and Ali Abunimah. McCain himself insinuated that Obama received money from "shady" Arab sources. "His campaign had to return $33,000 in illegal foreign funds from Palestinian donors," McCain said in New Mexico, adding, "Why has Sen. Obama refused to disclose the people who are funding his campaign?"

McCain conveniently left out the fact that the "$33,000 in illegal foreign funds" was from two Palestinian brothers from Gaza who bought $33,000 worth of T-shirts from Obama's campaign Web site.

Bobby May, the McCain campaign chair in Buchanan County, Va., and correspondence secretary for the Buchanan County Republican Party, warned in a "satirical" column that "the platform of Barack Hussein Obama" includes:

USING RACISM as an election strategy is nothing new in American politics--not to the Republicans, nor to the Democratic Party either.

In 1968, in the wake of the civil rights movement's victories, Richard Nixon's campaign came up with the "Southern Strategy" of using coded racist appeals rather than outright bigotry to attract white voters in the South who had been loyal Democrats. Nixon's diatribes about "law and order" were a way of tapping racist sentiments without using the discredited language of white supremacy.

As the social movements of the 1960s declined and a new conservative era took hold in mainstream politics, the right became bolder. Ronald Reagan kicked off his 1980 presidential campaign with a call for "states' rights" in Philadelphia, Miss., the site of the Klan's 1964 killings of three civil rights workers.

In 1988, campaign strategists for George Bush Sr. went after Democrat Michael Dukakis as soft on crime with a scare ad about a Black prisoner, Willie Horton, who committed a rape while on furlough in Massachusetts.

The aim of such tactics was to make racism "respectable" again in the post-civil rights era. But their effect went beyond persuading "swing votes" in election campaigns. They resulted in physical violence against African Americans, they stoked an epidemic of police brutality, and they set the stage for a racist incarceration binge, among other consequences.

Today, McCain and Palin are improvising new variations on an old theme. Obviously, they are doing so out of desperation, knowing that the tide of public opinion has turned against the Republicans. Smearing Obama is certain to repel even some middle-of-the-road voters, and reinforce the fact that McCain is anything but a moderate and maverick within the Republican Party--and it will make the Democratic Party base all the more determined to stop the Republicans.

But it's important to recognize at the same time that the appeals to racism will embolden a section of hard-core bigots.

Obama could call out the Republicans' racism and push back against the smear campaign. But throughout his campaign, he has avoided this.

From the narrow standpoint of the U.S. two-party system and winning elections, this may be the "smart move." The media's conventional wisdom is unanimous that Obama can't appear angry or militant in any way, or he risks being pigeonholed (by the same commentators!) as an "angry Black candidate." That such a crucial social issue hasn't been taken up shows the limitation of the American political system as much as Obama's personal failing.

But not challenging racism only allows it to flourish. The bigots gain confidence to spew their hate, and to act on it, too.

The same millions of people who view Obama with a sense of hope that he represents change could be part of challenging one of the vilest aspects of American society, both historically and in the present: racism.

But Obama and the Democrats aren't interested in building that kind of an opposition. Taking on the racism in U.S. society requires organization and struggle at the grassroots to challenge this poison in whatever form it emerges.