Will you be able to afford to retire?

Petrino DiLeo explains how the financial crisis has taken away the "American Dream" of a comfortable retirement.

SINCE PEAKING a year ago at 14,279.96, the Dow Jones Industrial Average--the best-known measure of the stock market--had dropped by 35 percent, as of this morning. And that's only because there was a record-setting rally on the stock market yesterday--as of last weekend, the Dow was down by over 40 percent.

When it comes to how the economic crisis will affect working people, the consequences of the housing disaster are clear. The value of homes is off by more than 20 percent from the peak, and still going down. Already, roughly one-sixth of homeowners, 12 million households, owe more on their homes than they are worth.

Millions of working-class Americans will lose their homes to foreclosure. But even for those who hang on through the crisis, their house is the largest--and, usually, only--store of wealth. The crash of housing prices is cutting deeply into the main source of savings for most working people--not to mention eliminating a source of cash, since it has become difficult, if not impossible, to refinance or borrow against homes under the current conditions. 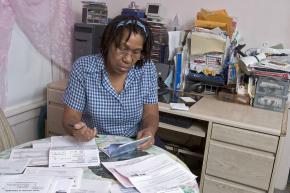 By contrast, the ups and downs of the stock market can seem scary, but more remote. After all, very few workers have the resources to gamble on stocks.

But retirement savings is one way that the stock market affects a much larger number of people. Anyone with a 401(k) plan or similar retirement account that's heavily invested in stocks has experienced massive losses. Earlier this month, the Congressional Budget Office estimated that stock market losses had vaporized $2 trillion in retirement funds--and that was before Wall Street had one of its worst-ever weeks.

Many people are realizing that the modest sums they hoped to rely on for retirement are evaporating. As a result, another element of the fabled American Dream--that after a lifetime of hard work, even ordinary people would be able to enjoy their "golden years" in some comfort--is disappearing.

On the contrary, ordinary people today are concluding that they will have to work for many more years, if not the rest of their lives, because of the loss in value of their retirement savings.

As 62-year-old Denise Edwards told the Associated Press, "We just have to work for as long as possible." Edwards said she expected to work another decade to make up for the damage to her savings. "And we're going to have to count on our [two] daughters," she said.

In Chicago, 59-year-old Ruth Ann Schmitt faces the same dilemma. "I was hoping to retire within five years and still have enough to live on," Schmitt, who works for a foundation, told the Chicago Tribune. "But that's sort of shot. I'm figuring 10 more years of work."

Here's where the high-profile casualties of the financial crisis--the bankers and Wall Street executives whose big gambles got their companies into trouble--don't have anything to worry about. Thus, Jimmy Cayne, former CEO of the failed investment bank Bear Stearns, got a severance package worth $30 million on the way out the door, and that comes on top of compensation and stock sales worth well over $100 million during his career.

THAT RETIREMENT has become such an uncertain thing for workers is no accident.

One of the key tenets of the pro-free market, neoliberal agenda of the past three decades has been to shift the burden of retirement savings onto individuals, rather than state-sponsored or employer-sponsored programs.

For one, Social Security has been under constant attack. George Bush's big plan for his second term--before his "political capital" from the 2004 election evaporated--was a scheme to privatize the government program for seniors. That money would have disappeared in the Wall Street crash.

Fortunately, Bush and the Republicans didn't get away with Social Security privatization. But at the company level, the burden has been shifted onto employees to manage their own retirements through defined-contribution plans, like 401(k)s, rather than traditional defined-benefit pension plans.

Under a defined-benefit pension plan, companies place money into pension funds, which is then invested in stocks, bonds, mutual funds and other investment vehicles in order to pay out a specific annual amount after the employee retires. The payouts are therefore "defined."

Under a defined-contribution plan, by contrast, employees and employers both contribute to individual retirement accounts. In this case, it is the contributions that are "defined" because the amounts put into the fund can vary. Retirement benefits, however, aren't defined--what retirees get when they start collecting depends on how the investments did.

Wall Street lobbyists, the financial service industry and politicians sold this transition by arguing that allowing people to invest their retirement savings in the stock market would enable them to share in Wall Street's prosperity. But there were clear ulterior motives. Defined-contribution plans cost companies less to administer. Financial service companies benefit by charging users fees for managing the funds. And politicians, of course, get campaign contributions from both sectors.

To make it all the more galling, the cover story was a lie. Even before the stock market tanked, research showed that defined-benefit pension plans were more efficient, cost less and paid out more than defined-contribution plans.

For example, a 2004 study by the Center for Retirement Research at Boston College looked at rates of return for both types of plans between 1988 and 2004. Defined-benefit plans posted a 1 percent greater return than defined-contribution plans, despite similar investment strategies. What was the difference? Defined-contribution plans often include higher fees, which end up reducing a retiree's payout.

Moreover, on an individual level, if a person makes the wrong choices--i.e., if they had all of their 401(k) allocated to stocks during the past year, rather than diversifying into other investments--they can lose a lot of money.

AND THAT'S in cases where disaster didn't strike. At a company like Enron, for example, workers' retirement plans got wiped out entirely in the bankruptcy, as these funds were required, under company rules, to keep investments in company stock.

Of course, even defined-benefit plans aren't free risk of this risk. Many companies have wiped out pension benefits after the fact. In 2002, for example, Bethlehem Steel cut steelworkers' retirement benefits in half after the company's $3.9 billion pension fund collapsed.

Bethlehem Steel isn't an exceptional case, either. Many companies and states with defined-benefit plans have underfunded such programs, and then came up short on payouts. This is partly the result of the Employee Retirement Income Security Act, which enabled companies to use paper gains from the stock market as credits toward pension funding obligations, rather than putting real money into the funds. Now, with the markets having lost a third of their value, the problem will only get worse.

In a rational society, pensions would be taken out of private hands altogether. Social Security could be funded at a much higher level by taxing the rich, and provide a comfortable level of retirement benefits for all workers.

But the opposite is taking place today. People who have worked their entire lives are discovering that the American Dream of a comfortable retirement is a fantasy. It's another example of a system that puts profits before people, protects the rich at the expense of the poor, and makes the working class pay for crises created at the top of society.