Why won’t Obama back a real jobs plan?

Barack Obama should be called out on the economic policies he's proposing--and, more to the point, what he isn't proposing.

SUCH IS the scale of the economic crisis today that a Republican president, committed throughout his tenure to the free-market agenda, announced this week that he was getting the U.S. government into the banking business--causing howls from some right-wing cranks that George Bush was bringing "socialism" to America by buying stock in nine major banks.

So what do you think was at the center of the Democratic presidential candidate's economic proposals put forward this week?

Total nationalization of the banks? Of the whole finance industry? Seize the car companies, too? Bring back the Works Project Administration from the 1930s?

Nope. The correct answer is: Tax breaks for business.

At the start of the week, with the last presidential debate looming, Barack Obama proposed new measures to add to his economic program. Obama said his main proposal was about creating jobs in a shrinking economy--but his method for achieving this is to offer companies a $3,000 tax break for every new job they create, this year and next. 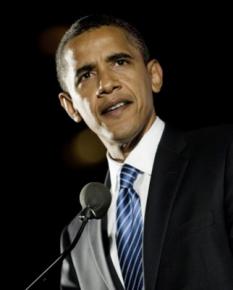 Obama put forward several other measures: allow families to withdraw up to 15 percent from retirement savings accounts without getting hit with a tax penalty; require financial firms that participate in the Wall Street bailout to abide by a 90-day ban on foreclosures for families "making a good-faith effort" to keep up with payments; and get the Federal Reserve and Treasury Department to help strapped state and city governments get emergency access to cash.

These other proposals are pretty non-controversial--though it ought to be pointed out that the problem with withdrawing from retirement accounts now is that workers will cash out part of their savings when the value is at a low ebb because of stock market declines, and they'll leave themselves with an even worse problem in the long run (which Obama has done nothing to address) of finding that their retirement savings aren't enough to live on.

As for Obama's jobs proposal, what stands out about it is that he's reaching back to the bygone era of neoliberalism--okay, it's only a few months bygone, but it's definitely gone by--for the kind of tax policy-centered measure championed by Republicans and "fiscally conservative" Democrats.

If the U.S. government can find $700 billion to buy up bad debts on Wall Street and another $250 billion for a stake in the biggest banks, why not spend some money on the government creating jobs. There's certainly no shortage of crumbling schools that need rebuilding, or public transportation systems that should be overhauled.

As Obama announced his proposals, Democratic congressional leaders unveiled plans to come up with a new stimulus package worth as much as $300 billion, which could be raised for consideration after the November election, as a challenge to the lame duck Bush administration and congressional Republicans to try to stop it.

This package is likely to be closer to what's needed--with provisions for extending and expanding unemployment and food stamp benefits, spending on infrastructure projects and so on. But the question is whether this proposal is more designed for election purposes to put Republicans on the spot in the remaining weeks of the campaign.

If it does come up--either after the election or once a new Congress takes office in January--look closely to see if the spending priorities have been trimmed back in favor of Obama's commitment to fiscal responsibility.

IN TERMS of the election, Obama is way ahead, no matter what he proposes. He now has a commanding lead in opinion polls, close to 10 percentage points, according to an average of all surveys maintained at Pollster.com.

The point when Obama broke out of a dead heat with McCain and began to gain ground stands out clearly--the third week of September, when Wall Street's crisis hit meltdown mode with the bankruptcy of Lehman Brothers, the nationalization of insurance giant AIG and Treasury Secretary Henry Paulson's proposal of a $700 billion bailout. The disaster of the economy is driving the election, not either of the two candidates.

Of course, McCain isn't helping his cause much by sticking to the same old right-wing nostrums on the economy. His proposal for this week smuggled in--surprise, surprise--yet another promise to cut the capital gains tax, which would mostly benefit the richest 1 or 2 percent of people in the U.S.

McCain represents a discredited agenda of trickle-down economics and neoliberalism that's responsible for widening the gap between rich and poor, and the crisis of the financial system.

But that's certainly no excuse to pull punches when it comes to what Obama is proposing--and, more to the point, what he isn't.

The credo of budget-balancing has become nonsensical with the economy seemingly headed for a deep recession. With banks ceasing to lend, businesses laying off workers, state and local governments slashing services and shedding employees, homeowners defaulting in record numbers, and consumers cutting back, a massive federal stimulus is all that stands between the nation and economic calamity.

Absolutely true. But the remainder of Meyerson's article is spent emphasizing what's wrong with John McCain. He doesn't have a word of criticism about Obama's own repeated calls for "budget-balancing" or his lame jobs proposal, both of which are miles away from "a massive federal stimulus."

It's easy to denounce McCain for idiocies like his proposal to freeze government spending as the economy teeters on the brink of a depression. But Obama's economic program is also marked by a commitment to discredited neoliberal dogmas--and it should be called out for what it is.

Nothing that the leaders of either the Democrats or Republicans are considering now will be sufficient to stop the suffering that working people are beginning to go through. As Mike Davis wrote for the TomDispatch Web site:

Neither major party retains more than a few enigmatic shards of policy traditions different from the neoliberal consensus on trade and privatization. Indeed, posturing pseudo-populists aside, it is unclear whether anyone inside the Beltway, including Obama's economic advisors, can think clearly beyond the indoctrinated mindset of Goldman Sachs, the source of the two most prominent secretaries of the treasury over the last decade.

The answer won't come from inside the Washington political system. As Davis points out, referring to the struggles of the 1930s, "the New Deal did not arise spontaneously from the good will or imagination of the White House. On the contrary, the social contract for the post-1935 Second New Deal was a complex, adaptive response to the greatest working-class movement in our history."

The challenge, then as now, is to build a working-class opposition, independent of the mainstream parties, which can make our demands heard and felt by all the politicians in Washington.