Is Obama really a radical at heart?

If Obama is acting like a centrist now, it's most likely because he is a centrist--rather than a radical posing as one to get elected.

WITH LITTLE else to offer on its own behalf, the McCain-Palin ticket has built an entire campaign on ridiculing and demonizing Barack Obama. First, Obama was a neophyte. Then, he was a celebrity. Now, he's a dangerous radical, even a friend to terrorists.

Biden responded, "Are you joking? Is this a joke?" Of course, Biden went on to explain that Obama isn't a socialist, but that his plans aimed to provide the "middle class" with a tax cut.

In the fevered imaginations of the right wing, Obama is a dangerous radical who is hiding behind a mask of cool "centrism." Once in office--and with a Democratic majority at his back--Obama will pull off the mask to reveal his true, radical agenda.

But in the camp of Obama supporters, a similar--if less crazed--analysis holds.

It goes this way: Obama is a genuine progressive who is dedicated to affecting major political and social changes. But because he's running in a generally conservative country, with the Republicans ready to pounce on his every misstep, he can't really lay out his full aspirations. So he has to reassure people, using the language of market-friendly "centrism." Once Obama is in office, goes the reasoning, progressives will have an ally who will work with them to produce the social change that they all want.

Given the crises facing the country, the widespread discredit that the Bush administration has brought on Republicans, and the poll-affirmed desire of the electorate for a clean break with policies of the past generation, an incoming Obama administration could be planning huge changes to the political economy of the U.S., akin to those of the 1930s New Deal.

Indeed, many liberal and left commentators have urged precisely this, with some calling for a "new New Deal" and others advocating measures to take advantage of a "social democratic moment."

Yet despite Obama's soaring rhetoric, he has actually advocated few policies that break with any of the accepted orthodoxy in Washington today.

DURING THE primary campaign against Hillary Clinton and John Edwards, Obama often took stands on economic issues that placed him to right of Clinton's fake populism. As the scale of the housing crisis began to force its way into the primary campaign, Obama held back from support for a moratorium on foreclosures and government aid to strapped homeowners, when Edwards and Clinton advocated both. 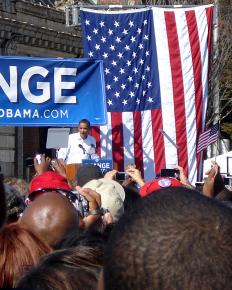 By the summer of 2008, after clinching the nomination, Obama had recognized that it was untenable to maintain this "above the fray" attitude to the housing crisis. He (and free-market champion John McCain, for that matter) voted for the multibillion-dollar housing bill that passed the Congress. But it was telling that his first inclination on addressing the crisis was to take the position least offensive to financial interests and neoliberal dogma.

However the political season influences the emphasis or spin that Obama puts on different economic issues, we shouldn't forget that he's the one who hired "centrist," pro-free market economists like the University of Chicago's Austan Goolsbee and Wal-Mart defender Jason Furman as his top economic advisers.

At a July summit involving those figures and other corporate and Republican leaders, Obama highlighted a "bipartisan" approach to the economy that, although deliberately vague, seemed to countenance limited government intervention, but put emphasis on reduction of the federal deficit and aid to the private sector--in essence, a rehash of 1990s Clintonomics.

Similarly, Obama's record on foreign policy--for example, pledging to increase the size of the military and step up the war in Afghanistan--place him inside a growing consensus among "serious" Washington foreign policy experts. In fact, Obama is so conventional and "bipartisan" on foreign policy matters that his team has openly talked about asking Bush's Defense Secretary Robert Gates to stay on in his position under an Obama administration.

In reviewing this record, we should take the approach that the simplest explanation is the best one. If Obama acts like a "centrist," it's most likely because he is a centrist--rather than a radical posing as one.

However, the real world has a way of imposing itself on politicians, no matter their intentions. In the face of the greatest financial crisis since the Great Depression, the free-market ideologues of the Bush administration have embarked on the largest government intervention in the economy in three-quarters of a century.

Ironically, on the same night that Obama used his 30-minute national infomercial to showcase his concern for ordinary people--including reaffirming his call for a 90-day moratorium on foreclosures--the Bush administration announced a multibillion-dollar plan to rewrite and subsidize more than 3 million mortgages facing foreclosure.

In other words, the right-wingers in the Bush administration were proposing a more far-reaching plan than the supposed "radical" Obama.

In office, the Obama administration will face many challenges like this that will force it to confront--and possibly, abandon--its moderate centrism. If it does--and if it moves toward a more populist stance--it won't be due to Obama's hidden radicalism. It will be due to his assessment of what the system needs to right itself.

In that sense, an Obama administration would be reminiscent of the Depression-era presidency of Franklin Roosevelt.

Despite some capitalists' complaints that the New Deal represented a step toward "socialism," Roosevelt and the New Dealers had no such intention. The New Deal helped to save capitalism from itself. And Roosevelt argued to his business critics, "I am the best friend the profit system ever had."