Making an impact on Prop 8

Siddharth Patel looks at the new wave of grassroots activism against the passage of California's Proposition 8.

A SPIRITED group of activists gathered on the night of November 11 at the LGBT Community Center in San Francisco to organize a protest as part of the nationwide "Join the Impact" day of action against the passage of California's Proposition 8 and the denial of marriage equality to same-sex partners.

Join the Impact is bringing together activists in dozens of cities across the country for a coordinated day of protest on Saturday, November 15.

About 30 activists, many of whom had been organizing together over e-mail for days but were just meeting face-to-face for the first time, gathered to hash out the logistics, program and politics of the demonstration. The meeting was truly a success of Internet organizing connecting with an electric political moment, and the committee is the epitome of grassroots activism.

The energy in the room was incredible, with many volunteering their special talents--Web design, event security, emceeing, DJing--and others volunteering for whatever needed to get done. Print shops in San Francisco have started churning out flyers for free in multiple languages, which are already up around the city and the area. 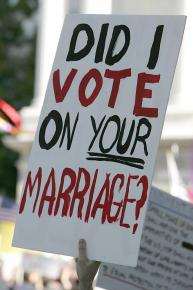 The demonstration--which starts at 10:30 a.m. on the steps of City Hall--promises to be large, to judge from its followings on the social networking sites Facebook and Myspace. The word-of-mouth, "viral" buzz generated around "No on 8" events in recent weeks has been feverish. In addition, some of the activist networks from the official No on 8 campaign, as well as from established groups like Marriage Equality California, are beginning to mobilize.

At the organizing meeting, the group debated what the political character of the event should be. While two activists argued for limiting the focus to repealing Proposition 8, the sentiment in the room was that a broader message about challenging homophobia (beyond winning marriage equality) and other forms of oppression was the right way to go.

When one Latino activist (who led a previous No on 8 demonstration) put some of the blame for Prop 8 on backward Latino voters, another leading organizer came back forcefully to argue against racist scapegoating of people of color, and to argue for inclusiveness and an orientation on winning over all sectors of society.

Another debate arose when an activist suggested that drag queens should not be featured too centrally as speakers and representatives of the movement, because they would alienate "ordinary" people. Again, the sense of the room was that it was dead wrong to push drag queens back in the closet--that our movement must proudly defend drag queens and all LGBT people if we hope to defend anyone at all. An injury to one is an injury to all!

Another pressing question was what next? What do we do with the energy and the thousands of people that are continuing to show up at rallies and will show up on Saturday? Will phone calls to Congress be more effective now that Barack Obama will be in the White House?

I think we should consider civil disobedience, like sit-ins at clerks' offices demanding marriage licenses. But this debate is just getting started.

Robert, who started the organizing in San Francisco by sending his e-mail to the Join the Impact Web site, said:

It's good to protest Prop 8, but this movement needs to move beyond Prop 8 and go for marriage equality in all 50 states. California is a good starting point, and hopefully a good win here will boost morale, and then we have to help out friends in more uphill-battle states.

We have to take this to the Supreme Court and the president. This is our LGBT grassroots movement, right here, right now. This is our movement, and this is our time. When Prop 8 gets overturned, it won't be the end of the movement, it will be the beginning.