Barack Obama's election isn't the end of the process, but the start of the possibility of bringing about real change.

FOUR YEARS ago, a shroud of despair and fear descended after George W. Bush's re-election.

Bush's victory--legitimate this time, as opposed to the stolen election of 2000--was seen by many as a popular endorsement of his administration's right-wing agenda at home and abroad, and confirmation that the U.S. had become "red-state America," with Republicans looking forward to a "permanent majority" in government.

Four years later, the mood could not be more different.

Obviously, reason number one is that the other side won. Barack Obama beat John McCain by twice the margin that Bush managed over John Kerry in 2004, and the Democrats added to their majorities in both houses of Congress.

But it's how Obama and the Democrats won that has greater meaning now.

A country founded on slavery and maintained through systematic racism elected its first African American president. Even McCain and the Republicans were forced to recognize the historic meaning of the victory of a man they reviled for "palling around with terrorists." 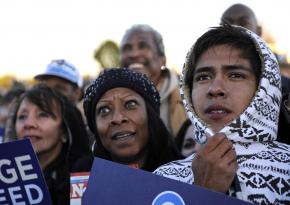 In this sense, the celebration of Obama's win isn't just of one side beating the other, but of history being made. A generation ago--maybe even a few years ago--it would have been impossible to imagine an African American winning the presidency. Two generations ago, Blacks across the U.S. South couldn't vote for president, much less hope to become one.

But on November 4, that accepted truism of American politics was upended, along with any number of others. Case in point: the idea flogged in the media throughout Election 2008 that working class whites wouldn't vote for a Black candidate. Instead, Obama won a higher percentage of the white vote than any Democratic candidate since the 1970s.

"Almost every assumption about America that was taken as a given by our political culture on Tuesday morning was proved wrong by Tuesday night," wrote New York Times columnist Frank Rich.

This larger political shift away from an era of conservative dominance was as much a part of the Election Night celebrations as Obama himself. "The festive scenes of liberation that Dick Cheney had once imagined for Iraq were finally taking place--in cities all over America," Rich wrote.

The hopeful enthusiasm has continued into the transition period before Obama takes office. As USA Today summarized the results of its poll:

Expectations for Obama are high across the board. Eight in 10 said he will improve conditions for minorities and the poor, and 76 percent said he'll increase respect for the United States abroad.

About seven in 10 said he'll be able to improve education and the environment. More than 60 percent said he will reduce unemployment, bring U.S. troops home from Iraq, improve the health care system, create a strong economic recovery and keep the U.S. safe from terrorism.

More than half said he will be able to bring troops home from Afghanistan, reduce U.S. oil dependence, heal political divisions and control federal spending.

Some of these conclusions are far ahead of what Obama has actually said--he is, for example, on the record as favoring an increase of U.S. troops in Afghanistan.

This is a critical development for anyone who hopes to see the promise of change raised during the campaign become a reality. The most important starting point of any struggle is the belief that something different is possible--and that it matters what we do to bring that about.

There's no better example of the new mood than the reaction to one of the only bitter notes from the election--the passage of Proposition 8 in California, which strips same-sex couples of the right to marry that they won earlier this year through a California Supreme Court decision.

Angry supporters of equal marriage rights--central among them, many of the 18,000 gay and lesbian couples who married after court ruling--took to the streets starting the night after the election and continuing every day for the rest of the week. On November 15, a call for a national day of action on a newly created Web site led to demonstrations in 300 cities across California and spreading around the U.S.

The contrast with 2004 couldn't be starker. Then, the right wing was able to push through ballot measures to ban same-sex marriage in nine states, as the leading edge of their agenda of social conservatism. The gay marriage movement went into retreat, accepting the conventional wisdom that by being too radical, it had given the right wing an advantage to exploit.

This time, however, supporters of marriage equality are on the offensive. One constantly repeated slogan on the demonstrations is "Yes, we can"--a reference to the Obama campaign's message of hope, an echo of the "Sí se puede" chants from the May Day mega-marches for immigrant rights, and a symbol of the sentiment among supporters of same-sex marriage rights that they will overcome this defeat because they're on the right side of history.

OBAMA AND the Democrats recognize this mood of raised expectations. But they regard it with a sense of concern. "It's important that everybody understands that this is not going to happen overnight," said Robert Gibbs, a campaign strategist for Obama and soon-to-be White House press secretary. "There has to be a realistic expectation of what can happen and how quickly."

Why the nervousness? Because Obama's powerful message of hope and rhetoric about change was never matched by a commitment to radical policies and political positions.

Obama comes out of the political mainstream of the Democratic Party leadership--so it's no surprise that he is staffing his White House with veterans of the last Democratic administration of Bill Clinton.

Leading the way is Obama's choice for a chief of staff: Rahm Emanuel, notorious as one of Clinton's political enforcers, particularly when it came to whipping into line organized labor and liberal organizations disgruntled with the administration's embrace of center-right policies.

There will be plenty of other blasts from the Clinton past in the weeks to come--including, according to rumors as this article was being written, Hillary Clinton taking over as secretary of state.

But that doesn't mean we should expect a repeat of the triangulated policies of the Clinton era. The difference is that Obama has become president after the discrediting of the right-wing agenda that dominated U.S. politics for the last three decades, including the Clinton years.

On the economy especially, Obama faces a severe crisis that won't respond to the tame government measures popular with policymakers in the neoliberal era.

Even during the campaign, Obama had to shift from his cautious response to the mortgage crisis, when he refused to call for a moratorium on home foreclosures like Democratic rivals Hillary Clinton and John Edwards.

Obama has said he wants Congress pass a further stimulus package, but the price tag has risen continually--currently, his advisers suggest a proposal that could add up to $600 billion. Plus, Obama has put his stamp of approval on an attempt by congressional Democratic leaders to give the ailing Big Three automakers access to funds from the $700 billion bailout bill for Wall Street.

In short, the scale of the problems and questions the U.S. faces--not just economically, but in the areas of foreign policy and more--is driving Obama toward a different agenda.

But the exact shape of that agenda will be determined by how much pressure he feels from below.

Obama is certain to enact some changes right away, but others won't go through without a fight. Thus, he will almost certainly extend unemployment benefits. But will Obama take on the looming corporate opposition to the Employee Free Choice Act that would dismantle anti-labor laws and make joining unions easier?

Will his economic team at first fall back on familiar neoliberal prescriptions, or will they turn to a more dramatic intervention? Obama has said he will have a program for infrastructure improvements, but will his proposal put a priority on creating good-paying union jobs?

How those questions are answered will depend in important measure on how our side organizes to make its hopes felt in Washington.

OBAMA'S ELECTION represents a historic change in U.S. politics. But that change is just the beginning.

The dam on expectations erected through 30 years of conservative dominance has broken. But this is only the first stage of the struggle. The election of the candidate who promised change wasn't the end of the process, but only the beginning of the possibility for bringing about that change.

If there is no struggle, there is no progress. Those who profess to favor freedom and yet deprecate agitation are men who want crops without plowing up the ground, they want rain without thunder and lightning. They want the ocean without the awful roar of its mighty waters. The struggle may be a moral one, or it may be a physical one, and it may be both moral and physical, but it must be a struggle. Power concedes nothing without a demand. It never did, and it never will.

There are significant challenges ahead in mobilizing that struggle. Conditions for working people have worsened steadily over the past several decades, and unions and social movement organizations have declined, both in numbers and influence, and in their political visions.

But that situation can shift rapidly, as we have already seen around the issue of same-sex marriage in just the few weeks since the election.

The central importance of Obama's victory is that it has broken through the bitter prejudice that nothing much can change in society. If those committed to organizing for a different vision of society can relate to the hopes that this has inspired--and the newfound confidence that justice is on our side--then we can make the Obama years an era of struggle and political progress.