American politicians aren't reflecting the will of the American people, who aren't nearly as pro-Israel as their political leaders.

WITH ISRAEL'S invasion into Gaza killing and injuring thousands, and turning the area into a humanitarian catastrophe, a tide of criticism and denunciation has risen against it around the world.

But there are a few places where Israel won't hear a peep of criticism--on the contrary, it gets words of encouragement and statements of solidarity. Among them are the halls of the U.S. Congress, the Oval Office of the White House, and the offices of the U.S. president-elect.

Compared even to the level of criticism of the government in Israel itself, the one-sidedness of the pro-Israel cheerleading among members of the U.S. political establishment is astounding. Even expressions of concern for the humanitarian crisis facing Gaza are remarkably few among U.S. politicians.

As the respected Middle East expert Juan Cole put it in his Informed Comment blog:

If the U.S. legislators voted on the Gaza operation, they would support Israel except for the same 10 who objected to the war on Lebanon (the 10 are mostly from congressional districts with a lot of Arab-Americans). Israel will suffer no practical sanctions from any government.

President-elect Obama has remained largely silent on Gaza, claiming that because "America has only one president at a time," he cannot issue statements that might contradict the current lame duck government's policies.

But Obama is holding press conferences and giving YouTube addresses that are nothing if not critiques of the current administration's policies on every other issue. And he was quick to rush out a denunciation of the terror attacks in Mumbai last month.

Behind this seeming reticence to comment on Gaza, we have good evidence that Israel has nothing to fear from an Obama administration.

Last January, Obama issued a letter to UN Ambassador Zalmay Khalilzad, urging him to oppose any resolution criticizing Israel's siege of Gaza. "We have to understand why Israel is forced to do this," the letter argued. "Israel has the right to respond while seeking to minimize any impact on civilians."

During his campaign tour of the Middle East and Europe this summer, he visited Sderot, Israel, to express his support for Israelis targeted by rockets from Gaza. His comment at the time: "If somebody was sending rockets into my house where my two daughters sleep at night, I'm going to do everything in my power to stop that. I would expect Israelis to do the same thing." 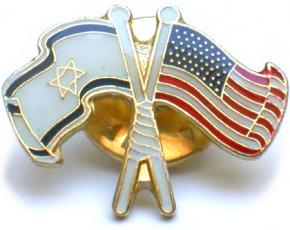 In other words, we should have little doubt about what Obama would say if he were regularly issuing statements on Gaza. Although the press forced him to issue a bland statement of concern for civilian casualties in both Gaza and Israel on January 6, he has preferred to remain mum.

Obama's silence is similar to the Bush administration's "disengagement" (to use the favored word of foreign policy wonks) from the Israel-Palestine conflict--an assurance that Israel can do whatever it wants without any interference from Washington.

WHAT EXPLAINS the bipartisan lockstep march behind the Israel Defense Forces?

It certainly isn't because American politicians are reflecting the will of the American people, who are not nearly as pro-Israel as their political leaders are. Writing for Salon.com, Glenn Greenwald pointed to evidence from a Rasmussen Reports poll that:

strongly bolsters the severe disconnect I documented the other day between (a) American public opinion on U.S. policy towards Israel and (b) the consensus views expressed by America's political leadership.

Not only does Rasmussen find that Americans generally "are closely divided over whether the Jewish state should be taking military action against militants in the Gaza Strip" (44-41 percent, with 15 percent undecided), but Democratic voters overwhelmingly oppose the Israeli offensive--by a 24-point margin (31-55 percent). By stark contrast, Republicans, as one would expect (in light of their history of supporting virtually any proposed attack on Arabs and Muslims), overwhelmingly support the Israeli bombing campaign (62-27 percent).

The most popular explanation usually given for the American elite's pro-Israel bias is that it fears the wrath of the "Israel lobby."

There is a powerful network of Zionist organizations--led by the American Israel Public Affairs Committee (AIPAC)--that donates money to pro-Israel candidates and lobbies the U.S. government on behalf of Israel. There's nothing anti-Semitic about pointing this out. These groups are quite open about their activities, and they aren't shy about touting their own influence.

But are these organizations and their lobbying efforts the reason why the U.S. supports Israel?

From a socialist point of view, the answer is no. Israel annually receives more than $3 billion in U.S. aid. Egypt runs second at around $2 billion. Yet no one would seriously claim that the aid Egypt receives is the result of an "Egyptian lobby."

It's no coincidence that Israel and Egypt are the two top recipients of U.S. aid. Both are important U.S. allies in the region where the lion's share of the world's oil is located.

Since the end of the Second World War, the U.S. has tied its "national security" to its access to and control of the flow of oil. That's why the U.S. has given military and economic aid to prop up "friendly" states in the region--not only Israel, but Egypt, Jordan and the Gulf monarchies, too.

The U.S. puts Israel at the top of the list because its government and population form the only uniformly pro-U.S. state in the region. In countries like Egypt, pro-Western governments rule over restive populations that hate the U.S. government's support for Israel and for their own oppressive regimes. Even the quisling government of U.S.-occupied Iraq isn't completely reliable.

In the 1990s, the Bush I and Clinton governments pursued various "peace" initiatives with Israel and the Palestinians--most of them aimed at getting Palestinians to accept their own "bantustans" (the term for the fake Black homelands in South Africa under apartheid) as a means to the end of stability for the U.S. and Israel in the region. Those efforts ran their course, and the Bush II regime, operating under the rubric of its "war on terror," simply let the Israeli government run amok.

These shifts in U.S. policy had nothing to do with the strength of the Israel lobby. They stemmed from changes inside the U.S. government's foreign policy establishment. The U.S. government decides how much leeway Israel has, and this leeway defines how successful the "Israel lobby" will be.

As long as Israel remains central to U.S. imperialism in the Middle East, Israel will continue to receive U.S. backing and aid. That's why Israel's ace in the hole in Washington isn't AIPAC, but the Pentagon, the CIA and the military-industrial complex. And as long as the national security establishment remains committed to Israel, elected politicians will provide the political cover that justifies the billions of U.S. taxpayer dollars that Israel receives.