A war to crush the Palestinians

Eric Ruder argues that Israel's rhetoric about Hamas "terrorism" is a pretext for an attempt to crush the Palestinian national movement.

TO U.S. politicians and mainstream media commentators, the justification for the massacre in Gaza is simple and unquestioned--that Israel is responding to Palestinian "terrorism" in the form of rocket attacks aimed at southern Israel.

"Israel has no choice but to take military action," said former Republican presidential contender Mitt Romney, in a phrase repeated by politicians across the political spectrum. For the Democrats, Senate Majority Leader Harry Reid declared, "I think this terrorist organization, Hamas, has got to be put away."

In U.S. politics, these two arguments--that Israel had no choice but to defend itself, and that it faces a terrorist assault--are sufficient to excuse even the most senseless killing of Palestinian civilians and wanton destruction of Gaza's infrastructure by Israeli forces.

But like so much that passes for fact in the U.S. discussion about the Israel-Palestine conflict, these arguments obscure all the essential dynamics of Israel's war on the Palestinian people. 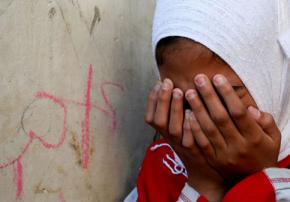 First, Hamas scrupulously observed a cease-fire from the summer of 2008 until Israel launched a raid November 4 that killed six Hamas members. The attack took place as the U.S. and international media focused its attention on the election of Barack Obama. Only after Israel broke this most recent cease-fire did Hamas militants fire rockets at Israel.

And as Palestinian activist and author Ali Abunimah has pointed out:

There are no rockets launched at Israel from the West Bank, and yet Israel's attacks, killings, land theft, settler pogroms and kidnappings never ceased for one single day during the truce. The Palestinian Authority in Ramallah has acceded to all of Israel's demands, even assembling "security forces" to fight the resistance on Israel's behalf. None of that has spared a single Palestinian or her property or livelihood from Israel's relentless violent colonization.

Since Israel's withdrawal from Gaza in 2005, Palestinian rocket fire has killed 11 Israelis. During the same period, Israel killed at least 1,400 Palestinians in Gaza, including 223 children.

And during the so-called truce that began last summer, Israel continued its suffocating siege of Gaza, imposing shortages of electricity, food and medical supplies that led to countless deaths, not to mention exacerbating the already inhuman levels of grinding poverty, unemployment and despair.

The inescapable conclusion is that Palestinian rockets fired from Gaza are the excuse for, not the cause of, the Israeli offensive that began on December 27.

THIS BEGS an obvious question: What are the real reasons for Israel's attack?

For one, Israel chose this moment with an exquisite sense of timing. According to Israel's Ha'aretz newspaper, planning for the offensive began six months ago.

The attack was launched between the Christmas and New Year holidays when most Western governments are on hiatus. Further, the Bush administration--an ardent supporter of Israel's aggression, no matter how bloody--could be expected to be quiet in its twilight while Barack Obama conveniently can conveniently hide behind the excuse that "there's only one president at a time" (despite his high-profile involvement in setting economic policy in response to the unraveling economy).

At the most basic level, Israel hopes that the military defeat of Hamas will finally give it total and unchallenged control over the flow of goods into and out of Gaza, specifically by destroying the network of tunnels that connect Gaza to Egypt at the Rafah border crossing.

While it is true that these tunnels are used to provide Hamas with military equipment, what the corporate media fails to point out is that the tunnels now provide the vast majority of essential humanitarian supplies--goods that Israel has blocked at the border crossings it controls. As journalist Jonathan Cook wrote:

Israel believes the current invasion will have achieved nothing unless this time it regains absolute control of the Rafah border, undercutting Hamas's claims to be running the Strip. The "mechanism" therefore requires that technical responsibility is lifted from Egyptian shoulders.

According to the Israeli plan, it will pass to the Americans, whose expertise will be called on to stop the tunneling and prevent Hamas from rebuilding its arsenal after the invasion comes to an end. Israel may additionally seek the involvement of international forces to diffuse the censure the Arab publics are likely to direct at Egypt as a result.

Israel also aims to further destroy Hamas' institutional means to govern Gaza in order to weaken Hamas' overall political strength and to create terms for a new cease-fire even more favorable to Israel. This is a longstanding goal of Israel's political leadership, which it has pursued by a variety of means.

As Avi Shlaim, an Israeli professor of international relations at Oxford University, wrote:

In January 2006, free and fair elections for the Legislative Council of the Palestinian Authority brought to power a Hamas-led government. Israel, however, refused to recognize the democratically elected government, claiming that Hamas is purely and simply a terrorist organization.

Then, Israel turned to more aggressive measures, working with the CIA to deliver guns and money to stoke a Palestinian civil war that Israel hoped would end in the overthrow of Hamas rule by the now fully tamed Fatah faction of Mahmoud Abbas, the current PA president.

But the plan didn't work out, according to David Rose, who unearthed the details of the operation in an April 2008 Vanity Fair article. He wrote:

[T]he secret plan backfired, resulting in a further setback for American foreign policy under Bush. Instead of driving its enemies out of power, the U.S.-backed Fatah fighters inadvertently provoked Hamas to seize total control of Gaza.

Some sources call the scheme "Iran-contra 2.0," recalling that [Deputy National-Security Adviser Elliott] Abrams [who was key to the implementation of the Gaza gambit] was convicted (and later pardoned) for withholding information from Congress during the 1980s Iran-Contra scandal under President Ronald Reagan.

There are echoes of other past misadventures as well: the CIA's 1953 ouster of an elected prime minister in Iran, which set the stage for the 1979 Islamic revolution there; the aborted 1961 Bay of Pigs invasion, which gave Fidel Castro an excuse to solidify his hold on Cuba; and the contemporary tragedy in Iraq.

THE IRONY, of course, is that for decades Israel sought to undermine, divide and destroy the Palestinian national movement as embodied in the Fatah faction of the Palestine Liberation Organization (PLO). Israel abetted the growth of Hamas as a means to that end.

Israel initially encouraged the rise of the Palestinian Islamist movement as a counter to the Palestine Liberation Organization, the secular coalition composed of Fatah and various leftist and other nationalist movements.

Beginning in the early 1980s, with generous funding from the U.S.-backed family dictatorship in Saudi Arabia, the antecedents of Hamas began to emerge through the establishment of schools, health care clinics, social service organizations and other entities that stressed an ultraconservative interpretation of Islam, which up to that point had not been very common among the Palestinian population.

The hope was that if people spent more time praying in mosques, they would be less prone to enlist in left-wing nationalist movements challenging the Israeli occupation.

By the early 1990s, even Israel's wink-and-nod at the growth of Hamas did little to persuade most Palestinians, who were not particularly religious, to abandon their commitment to the PLO, the historic representative of the Palestinian national movement.

It wasn't until the 1993 "peace process," by which Yasser Arafat and the PLO were transformed from resistance fighters into the willing accomplices of Israel's drive to put the West Bank under Israeli hegemony while isolating Gaza, that Hamas began to overtake Fatah's popularity.

"At the time of the Oslo Agreement between Israel and the PLO in 1993, polls showed that Hamas had the support of only 15 percent of the Palestinian community," writes Zunes. "Support for Hamas grew, however, as promises of a viable Palestinian state faded as Israel continued to expand its colonization drive on the West Bank without apparent U.S. objections, doubling the amount of settlers over the next dozen years."

In addition to suppressing the Palestinian struggle for self-determination, Israel aims to accomplish a larger regional goal with the assault on Gaza--namely, to re-establish the deterrent effect of having the most powerful military force in the Middle East. Ever since its humiliating defeat by Hezbollah in the Israeli assault on Lebanon in 2006, Israel has been looking for an opportunity to demonstrate overwhelming power.

Thus, the widespread civilian casualties and destruction of Hamas' political institutions are purposefully designed to send a message to Iran, Hezbollah and other regional foes that the price of opposing of Israel should not be underestimated.

"The Israeli army needs to address the problem created to its deterrence in 2006," Efraim Inbar, director of the Begin-Sadat Center for Strategic Studies, told Agence France Presse. "The army has to change its image among its enemies that it is afraid to use ground forces...It does not necessarily need to be a large-scale invasion, maybe just special units or localized incursions, but the army needs boots on the ground."

Finally, Israel's assault on Gaza is the latest attempt to put into practice the Bush administration blueprint for domination of the Middle East by the U.S. and its junior partner Israel. According to Columbia University professor Joseph Massad:

The U.S. has seen this as an opportune moment to fully integrate Israel in the region, so much so that it signaled to its Gulf allies to make proposals for a new regional alliance that includes Israel in its midst. The Bahraini foreign minister suggested a few weeks ago that Israel join the Arab League. Many such proposals have already been made in the past few months welcoming the colonial settlement to the regional alliance against Iran.

Against this U.S.-backed Israeli drive to further colonial domination, Palestinian resistance to Israeli occupation is legitimate and just--and protected under international law. No one should be fooled by U.S.-Israeli attempts to use the "war on terror" to excuse their imperial aims.