Taking on GM in Brazil

After General Motors laid off more than 800 workers at a key assembly plant in the industrial city of São José dos Campos, the workers' union responded with an immediate work stoppage--and is now mobilizing to defend those jobs.

In an article for ValeParaibano, the city's daily newspaper, Vivaldo Moreira Araújo, regional director of the Metalworkers Union and a leader in the militant Conlutas labor federation, puts GM's attacks in the context of the world economic crisis. This article was translated and slightly updated by Tom Lewis.

THE ANNOUNCEMENT of 802 layoffs at the General Motors plant here in São José dos Campos struck a hard blow against workers and the city itself. Capitalism's logic of incessant searching for profit speaks ever louder in this case, as the world economic crisis serves the bosses as an ideal pretext for their actions.

As we said to the metalworkers last year, the economic crisis cannot be underestimated or considered only a U.S. and European problem--an idea put forward by President Luis Ignacio "Lula" da Silva in one of his first speeches on the crisis. It took only a few months before Lula himself reconsidered his statement and admitted that the economic turbulence had also reached Brazil.

Despite the arrival of the crisis, it's important to understand that GM did not need to lay off any workers. On the contrary, the company made substantial profits in the last few years, principally in 2008, so much so that it sent its profits northward to help pay the debts of its U.S. parent company. GM Brazil's assembly operations broke various records in 2008, including in sales, with the production of 3.2 million cars, an increase of 8 per cent over 2007. 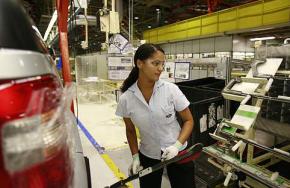 Another point to consider is that at the beginning of the crisis, the federal government, along with the state government, conceded billions of dollars of tax breaks to plant owners. This reduction of taxes amounted to a virtual basket of goodies for the oh-so "reasonable" businessmen.

For all of these reasons, the layoffs at GM Brazil should not have happened. And once completed, they represent a great betrayal of the city, principally of those sectors that had allied themselves with the company to try to impose an "hours bank" and salary cuts under the pretext of creating 600 temporary jobs in the assembly plant.

In this context, state Prefect (governor) Eduardo Cury, the City Council, the Commercial and Industrial Association of São José dos Campos, the Lawyers Guild of Brazil, the Diocese of São José dos Campos and other sectors of São José society have an even greater responsibility for demanding from GM the rehiring of the more than 800 laid-off workers.

It's time to demand the reinstatement of the workers from GM's Brazilian vice president, José Carlos Pinheiro Neto, who was awarded the title of honorary citizen of São José dos Campos by the City Council last year.

Statements of support for the GM Brazil workers can be sent to [email protected].

With respect to the mass layoffs in the city, Pinheiro Neto himself had the arrogance to say that "it's the market that's in charge." This statement reveals the devotion to and adoration of the "free market god" so religiously worshipped by our city officials. It's worth pointing out, however, that it was the same "market god" that led the system to its current crisis.

As far as the federal government is concerned, urgent measures are required that go beyond words, such as issuing a provisional measure that would stabilize employment for all workers. Another measure would be the reduction of the workday or workweek without a reduction in pay or use of an hours bank.

GM workers, the Metalworkers Union and Conlutas have already initiated mobilizations in the city, with the slogan "an escalade of mobilizations," and which began with stoppages last Tuesday. New initiatives are also planned, including a large demonstration in the city center this week.

Our call is for all workers in the city, the prefect, the council members and other officials to unite in the struggle over the profits of the biggest automobile assembly plant in the world, and for the reinstatement of the laid-off workers. It is necessary for the whole city to join in this mobilization, since this is the only way in which we will succeed in defending employment in our region.