Will Obama curb the crackdown by ICE?

Justin Akers Chacón looks at the suffering caused by ICE's supposed attempt to target "criminals"--and asks if the Obama administration will end these harsh anti-immigrant measures.

DURING LAST year's presidential campaign, Barack Obama raised the hopes of millions of immigrant rights supporters when he publicly stated that Immigration and Customs Enforcement (ICE) raids had "terrorized" families.

"The system isn't working...when communities are terrorized by ICE immigration raids; when nursing mothers are torn from their babies; when children come home from school to find their parents missing; when people are detained without access to legal counsel," Obama told representatives of the National Council of La Raza in June.

His statement validated the simmering outrage felt by millions of people, who turned out on Election Day to vote for an expedient end to the failed policy.

Since the election, however, the new administration has given no indication that it plans a significant break from the enforcement-oriented approach of former Homeland Security Secretary Michael Chertoff.

Obama's incoming Homeland Security chief, Janet Napolitano, speaking at her confirmation hearing, emphasized that border crackdowns, raids at workplaces and employer sanctions would continue or expand under her tenure. Asked what changes she would implement from the previous administration, she emphasized that she would "increase the focus on ensuring that employers of unlawful workers are prosecuted for their violations." 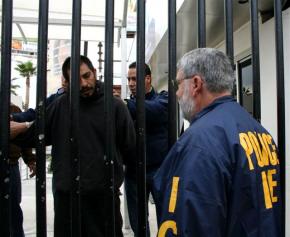 In an interview with a Chicago-based Spanish language radio station in February, Obama also seemed to be shying away from his condemnation of ICE raids. When asked whether a moratorium on raids was possible, he dodged the question, stating that his administration now intends to "evaluate [enforcement] laws that work and those that don't."

A good starting point for an "evaluation" would be the whole project of immigration enforcement begun under the Bush administration.

"Our interior enforcement efforts have focused on identifying, arresting and removing fugitives, criminals and illegal alien gang members in our country," Chertoff said at a March 2008 congressional hearing on Department of Homeland Security (DHS) oversight.

Not so, according to internal documents recently obtained from ICE, the agency responsible for carrying out raids and deportations.

Since 2002, the federal government's efforts at immigration enforcement have been framed as a national security objective--aggressive efforts designed to prevent another 9/11 or worse.

Justin Akers Chacón is co-author, with Mike Davis, of one of the best books on the politics of immigration and the struggle for justice and equality, read No One Is Illegal: Racism and State Violence on the U.S.-Mexico Border.

The International Socialist Review features regular articles on immigration issues, including "The immigration debate: New 'compromise' for the employers" by Shaun Harkin, and Justin Akers Chacón's "War on immigrants."

When the hunt for "domestic terrorists" yielded paltry results, enforcement efforts shifted to rooting out "criminal elements." This opened the door for the general persecution of undocumented workers, especially in the wake of the massive immigrant rights marches of May 1, 2006.

ONE OF the first undertakings of ICE was to identify, capture and deport Arab, Muslim and Middle Eastern immigrants residing in the nation with expired visas following 9/11. Over the course of eight weeks, 1,182 Middle Eastern, South Asian and North African men were detained in the U.S. for up to eight months. While most of the 762 who were charged with an immigration violation were deported, none were charged with terrorism-related crimes.

Another ICE action carried out through the racial profiling of Middle Eastern immigrants was code-named "Operation Front Line"--a secret government program designed to "detect, deter, and disrupt terrorist operations" during the 2004 presidential campaign.

Under this initiative, ICE targeted 2,000 immigrants from Muslim-majority countries from May 2004 to February 2005. A small number of these people had overstayed their visa and were subsequently deported, and a small percentage was charged with minor immigration violations. Yet four out of five of those detained were ultimately released--and not a single person was charged with a terrorism-related crime.

Despite the failure to identify and capture "terrorists," immigration enforcement became an end itself in the eyes of the Bush administration. By 2003, efforts were broadened to include the capture of the estimated 600,000 immigrant "fugitives"--that is, any undocumented immigrant with a criminal record or simply an outstanding deportation order.

Through paramilitary initiatives such as the National Fugitives Operation Program and Operation Return to Sender, money was pumped into the agency to set up more than 100 "fugitive recovery teams" to carry out the roundups. Agents raided homes, apartment complexes and neighborhoods across the U.S.

But according to internal agency memos obtained through the Freedom of Information Act and subsequently published in the New York Times, ICE "changed the rules and the program increasingly went after easier targets. A vast majority of those arrested had no criminal record, and many had no deportation orders against them, either."

In 2006, the agency raised arrest quotas and eliminated a clause stating that three-quarters of those apprehended had to be criminals, allowing for non-fugitive "ordinary status violators" to be factored into their count.

A subsequent report from the Migration Policy Institute has documented that despite expenditures of over $625 million dollars over five years, 75 percent of the 96,000 people apprehended under the National Fugitives Operation Program had committed no crime whatsoever other than being "out of status."

Considering that more than 349,000 people were deported through various DHS efforts in 2008 alone, the corruption of enforcement policy has undoubtedly wrecked untold lives and separated thousands of families under false pretenses. For instance, Homeland Security Inspector General Richard Skinner recently revealed that of the 2.2 million people deported from the U.S. between 1998 and 2007, more than 108,000 had U.S.-born citizen children.

As ICE declared open season on immigrants, arrest quotas to pad numbers and create the impression of success have become commonplace within other immigration enforcement agencies as well. A former Border Patrol officer in California revealed in early February that constant demands to meet monthly arrest quotas led agents to cruise streets, bus stops and even medical clinics looking for suspected undocumented immigrants.

According to an interview published in the Los Angeles Times, former agent Tony Plattel was fired for driving what he said were six dehydrated immigrants back to headquarters, despite orders to wait until his van was full. "We had to make eight apprehensions a day, and if we didn't meet that goal, we were pressured to get more the next day," he said. "I interfered with the quota, that's why I was fired."

These "head counts" demanded from the top of the agency have demoralized some agents like Plattel, but most continue to racially profile and persecute undocumented workers with impunity.

THE DRIVE to criminalize immigrants has led to heightened enforcement in the workplace as well, as the majority of undocumented immigrants are workers. Using the paper-thin rationale of cracking down on "identity theft" involving false Social Security numbers, ICE agents have raided workplaces across the country. And since 2006, increased workplace raids and deportations have ensnared an ever-growing number of workers.

The pattern of the raids seems random, and tactics have varied. In April 2006, authorities rounded up more than 1,000 workers at IFCO Systems, a leading manufacturer of pallets, crates and containers, in 40 plants across the country. That same month, ICE arrested 49 workers at North Carolina's Seymour Johnson Air Force Base after luring them with a flier to what was advertised as a mandatory Occupational Safety and Health Administration meeting.

In Newport, R.I., ICE agents raided restaurants, stores and apartments during an orchestrated sweep--and in some cases "appeared to be targeting people because they appeared foreign and were driving landscaping trucks." Another 160 people were swept up in a similar raid conducted in the Latino business district of Chicago known as Little Village.

The small town of Stillmore, Ga., was reduced to a ghost town in 2006 after ICE agents raided the trailer parks that housed hundreds of undocumented workers employed at the local poultry procession plant. Later that year, Swift & Co., the world's second-largest processor of fresh beef and pork, became the site of another workplace raid, when 1,300 workers across Texas, Colorado, Nebraska, Minnesota, Iowa and Utah were detained in the largest operation to date.

Less than two weeks later, ICE launched its largest single workplace raid to date. Of the 800 workers who showed up for work August 25 at the Howard Industries electronics plant in Laurel, Miss., some 595 never made it back home. The rest of the detainees--mostly female workers with children left stranded at home and at school--were released only after having their ankles fixed with monitoring devices to ensure that they remain prisoners in their own homes, pending eventual deportation hearings.

These arrests represent a major leap in the scale of enforcement. In 2002, ICE made only 25 criminal and 485 immigration-related arrests as a result of workplace raids. But in 2007, the agency charged 863 people with criminal violations, such as identity theft, compared to 4,077 workers who were charged with being in the country illegally--an 800 percent increase in five years. And by the end of 2008, workplace raids reached an all-time high of 6,287 arrests.

Despite this escalating crackdown, the Department of Homeland Security has completely failed in its self-declared mission of capturing "terrorists" and rooting out "criminal elements." But it did succeed in shifting the terrain of immigration enforcement to the persecution of Arabs and Muslims and undocumented workers.

Now, of course, Bush and Chertoff have themselves been "rooted out" by a hopeful electorate. There now exists the possibility for a reinvigorated immigrant rights movement to raise its voice.

In renewed efforts to bring an end to the "terror" of ICE raids, immigrant rights activists will need to pressure the Obama administration to take action on a moratorium--and remind all of their elected leaders that the Bush-Chertoff era is over.