Why Obama is wrong about our schools

BARACK OBAMA unveiled a wide-ranging set of education proposals in a high-profile speech March 10--and most Americans were eager to hear what the new president had to say about fixing our beleaguered public schools.

Yet Obama's speech and policy proposals on education are mostly recycled ideas from the Republican playbook: (1) Act like there's no such thing as underfunding, overcrowding or segregation in America's public schools; (2) Blame the straw men of "bad teachers" and "bad parents" for the problems; (3) Continue the privatization of education through expanding the number of allegedly "innovative" charter schools; (4) Exhort everyone to have "higher standards" without offering increased resources; and (5) Impose a corporate-style merit pay system on teachers.

To be fair, Obama's education plan does include small measures that are humane enough to send Dick Cheney's pacemaker into palpitations: Increased funding for early childhood education, and improving Pell grants and other financial aid for working-class college students. 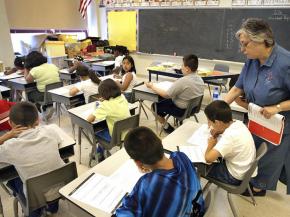 However, both these proposals are a drop in the bucket compared to what is needed--and what the richest nation in the world can easily afford--to provide the universal access to pre-school and college that Obama's speech hinted at.

And as welcome as these two initiatives may be to the students and parents who need them the most, they aren't enough to change the fundamentally conservative character of Obama's education plan. Let's look at it point by point:

Using U.S. Census Bureau figures, one can estimate that there are about 8 million children aged 3 and 4 in the U.S. According to a recent Rand Corporation study, universal preschool would cost about $6,000 per student per year. That leads to a high estimate of $50 billion a year to provide universal preschool from coast to coast, which is about one-tenth of the U.S. military budget, not counting appropriations for the Iraq and Afghanistan wars.

According to the White House press release that accompanied Obama's speech, the president is "committed to helping states develop seamless, comprehensive and coordinated 'Zero to Five' systems to improve developmental outcomes and early learning for all children."

Fine words, but the only dollar amount Obama mentioned is the one-time $5 billion boost to federal Head Start and Early Head Start programs that was included in his recently passed stimulus package. Every penny of that money is welcome and needed, but it isn't enough.

Today's economic crisis is leading colleges and universities across the country to raise tuition and cut back staffing and course offerings. Any boost to federal financial aid programs can't come a moment too soon.

The president's proposal will raise the maximum Pell Grant to $5,550 per year and offer a $2,500-a-year tuition tax credit. These reforms could mean the difference between dropping out and staying in school for thousands of college students.

At the same time, tuition at the University of California (UC) (which was virtually free in the 1970s) currently costs $8,000 a year. So assuming that a UC student and her family qualify for the maximum Pell Grant and the tax credit, that would provide just enough for tuition. This student would have to look elsewhere for money for books, supplies, health fees, room and board, etc. Much more can and must be done to assist financially struggling college students.

Explaining the achievement gap--or exploiting it?

"Year after year," Obama told his audience at a meeting of the U.S. Hispanic Chamber of Commerce, "a stubborn gap persists between how well white students are doing compared to their African American and Latino classmates." However, this and other passing references in Obama's speech to racial disparities in student performance shed little light on the reasons why such a gap exists. We heard very similar talk about the "achievement gap" that came from the Bush administration.

Politicians of both parties can talk a blue streak about the achievement gap and what to do about it, which helps them sound concerned about the plight of Black and Latino schoolchildren.

Yet you won't hear any of them admit our schools are more racially segregated today than at any time since 1968. Nor will they bring up the fact that mostly white suburban school districts typically receive thousands of dollars more per student than overwhelmingly Black and Latino schools of the nation's inner cities.

Education writer Jonathan Kozol has pointed out that as schools became more integrated between the late 1960s and the late 1980s, the gaps in test scores between white and nonwhite students steadily narrowed. In the last 20 years, a period of school re-segregation, those gaps opened up again.

It is particularly disquieting to hear President Obama--whose election gave millions of Americans hope that this country's long and bloody legacy of racism can finally be overcome--play the same political shell game as his predecessors when he discusses the racial disparities in our schools.

Any politician who talks about the achievement gap while ignoring the funding gap and the integration gap in the public schools is only helping to paper over the real institutional obstacles slowing the progress of students of color, and low-income students generally.

An attack on teachers

The two parts of Obama's plan that have generated the most press are his advocacy of "merit pay" for teachers and a massive expansion of semi-private charter schools. These positions have thrilled conservatives and the corporate media alike, who together have decided that every problem with public education today can be blamed on teachers and our unions.

Charter schools have become Corporate America's most successful method of introducing privatization and market-style competition into public education. That's right--the same free-market dynamics that have wreaked havoc in the fields of health care, housing and high finance are coming to education.

Supporters of charter schools describe them as laboratories of pedagogical innovation. In practice, most "high-performing" charter schools cherry-pick students and families that are already enjoying academic success and dump the children they find inconvenient to teach back into the mainstream public school system.

As for Obama's proposed merit pay for teachers, it would be based on the highly flawed institution of standardized testing. This would only add to the already high pressure on schools and teachers to "teach to the test"--that is, to distort the curriculum toward whatever will produce higher scores on tests, which don't measure creativity, critical thinking, bilingualism, applied knowledge or interpersonal skills.

Plus, there's a very simple problem with the logic of "performance pay" for teachers. There is no honest scientific method by which "excellence in the classroom" can be quantified. Schools are not widget factories, where a simple production quota can be used to measure the "effectiveness" of any worker. (And even in a widget factory, such quotas would only be tools in the hands of the boss to force workers to compete with each other.)

What will the teachers' unions do?

Obama's support for merit pay and charter schools is bad news for students, teachers and public education. But you'd never guess that from the reactions of leaders of the American Federation of Teachers (AFT) and the National Education Association (NEA).

Dennis Van Roekel, president of the 3.2 million-member NEA, went so far as to claim that the president was not advocating tying teacher pay to student test scores. But after the speech, Education Secretary Arne Duncan confirmed that the administration does want "student achievement" (read: test scores) to be a factor in determining teachers' pay.

The NEA produced a "talking points" memo saying that the union "welcomes the vision President Obama is presenting" on education.

For her part, Randi Weingarten, president of the 1.4 million-member AFT, went further. "Here in New York, the [United Federation of Teachers] has actively been on the forefront of many of the initiatives proposed by the president," she gushed, boasting of her support for merit pay, charter schools and "use of data" (the key ideological justification for more standardized tests) as president of the New York City local of the AFT.

One of the few high-profile critiques of Obama's speech from any teachers' union leaders came from United Teachers Los Angeles (UTLA). In a statement to the Los Angeles Times, UTLA Vice President Josh Pechthalt said of merit pay, "It doesn't work. You can't create an educational community by pitting teachers against each other."

"It's a bad idea," added David Rapkin, a high school teacher in South Central Los Angeles and member of UTLA's elected Board of Directors. "It will give administrators in the district the power to play favorites using standardized tests rather than really educating students."

Tellingly, just hours after making his speech on education, Obama proclaimed himself a "New Democrat," identifying himself with the conservative faction of his party--the very people who have championed charter schools, merit pay and other attacks on teachers in the name of "school reform."

The initiative for that kind of change isn't going to come from inside the political system--so teachers, parents and community activists will have to step up the fight themselves.