Jesse Hagopian, a teacher in the Seattle Public Schools and co-founder of Educators, Students and Parents for a Better Vision of Seattle Schools, has a proposal for where merit pay might actually be useful.

Chief Executive Officers, take out your #2 pencils and mark the letter that corresponds to the single best answer choice (remember, unlike on Wall Street, your scores will be invalidated if you are caught cheating).

1) Which of the following achievements of CEOs would warrant their lavish salaries and bonuses?

A) A global economic collapse that has led to millions losing their jobs, homes and pensions.

B) Two wars in the Middle East that have seen bountiful contracts awarded to private companies.

D) The systematic under-funding of schools and the push toward privatizing education through charter schools.

E) None of the above.

If you selected "E," congratulations! You are a rare official who has made the honor roll of the newly formed institute, Teachers for CEO Merit Pay. Our motto: "Because sabotaging the global economy shouldn't earn you a bonus."

Today's executives are increasingly flunking this basic test, falling behind the curve and, because of low standards, getting shuffled through the system believing they have earned the $18 billion in bonuses that were awarded to Wall Street last year (you can now view the report card at TeachersForCEOMeritPay.com). 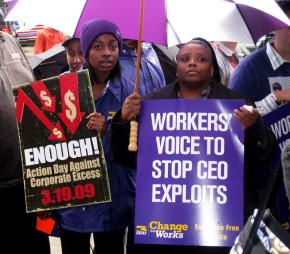 One CEO wearing the merit pay dunce cap is American International Group's Martin Sullivan, who, despite leading the insurance giant and our nation into fiscal ruin, received $25.4 million for his "financial planning" services from 2005-2008. To compound this absurdity, on Friday, March 13, AIG went ahead with its $165 million "retention pay" program, pledging to award its executives tens of millions of dollars in new bonuses even though it received a taxpayer bailout of more than $170 billion.

As AIG Chairman Edward Liddy said of the decision, "We cannot attract and retain the best and brightest talent to lead and staff the AIG businesses--which are now being operated principally on behalf of the American taxpayers--if employees believe their compensation is subject to continued and arbitrary adjustment by the U.S. Treasury."

Best and the brightest?

The bulk of the bonuses at AIG cover executives in the Financial Products Unit--the division that sold the credit default swaps that caused an American-corporate-record-breaking $61.7 billion loss for the fourth quarter of last year and brought the company to the brink of collapse. It seems fair to say these executives could be described, without hyperbole, to be about as bright as the back of a cave during a solar eclipse.

AS PRESIDENT Obama stressed in his March 10 speech on education reform, "I reject a system that rewards failure and protects a person from its consequences. The stakes are too high."

Inspired by this system-rejecting appeal, Teachers for CEO Merit Pay advocates this: when corporate executives repay the trillions of dollars their institutions have received from publicly financed bank bailouts; when they withdraw all mercenary forces and private contractors from the Middle East; when they relinquish control of health care and champion a single-payer plan that provides free coverage for everyone in the United States; when they discontinue exploiting tax loopholes and offshore havens, which have depleted state revenues and caused an education funding crisis, then they will be eligible to receive appropriate pay raises.

The need for a rigid merit pay system with strict accountability for CEOs stems from the nature of their position, which leads them to dedicate their lives to shortsighted goals focused on enriching themselves--regardless of the impact on the broader society.

But many officials--attempting to divert attention from those truly responsible for the decline of our society--are suggesting that teachers need to be held accountable for the erosion of our culture with stringent pay-for-performance requirements. President Obama attempted to scaffold this argument in his recent education speech, saying, "We've let our grades slip, our schools crumble, our teacher quality fall short, and other nations outpace us...It's time to start rewarding good teachers, stop making excuses for bad ones."

Performance pay structures in education, however, require teachers to compete for a limited pool of money. Instead of collaborating to provide the best possible education, merit pay creates disincentives for teachers to share information and teaching techniques. Thus, the main way teachers learn their craft--studying from their colleagues--is rendered useless. If you think we have high rates of teacher turnover now, wait until new teachers are seen as the competition by their more experienced co-workers, and have no one to turn to.

Bill Gates and Eli Broad are managing to thwart this basic logic by investing obscene amounts of money in the "Strong American Schools" crusade that has called for teacher pay to be tied to the culturally biased/curriculum narrowing high-stakes tests mandated by the misnamed No Child Left Behind Act. With their disciple now in Washington, Secretary of Education Arne Duncan, they are attempting to remake our schools in the image of a production line, where simple input-values are used to measure the efficiency of any worker.

The only reason these teacher merit pay advocates have been able to gain any hearing at all is because teacher pay is so abysmally low that any chance at an increase can look like an oasis to a nation of people lost in the desert of under-funding. According to a recent study by the National Association of Colleges and Employers, the teaching profession has an average national starting salary of $30,377. Moreover, the National Education Association recently found:

Over the decade from 1997-98 to 2007-08, in constant dollars, average salaries for public schoolteachers declined 1 percent while inflation increased 31.4 percent. Twenty-six states and the District of Columbia saw real declines in average teacher salaries over those years, adjusting for inflation.

BUT DON'T be taken in by the merit pay mirage--it won't quench the nations thirst for improved education.

A February 28, 2008 article from the Dallas Morning News analyzed Texas' $100 million experiment with the largest merit pay plan in the nation, involving some 52,000 teachers. The paper reported, "An overwhelming majority--85 percent--said they were teaching the same way they were before the $100 million plan was implemented in the 2006-07 school year." As Richard Kouri of the Texas State Teachers Association pointed out, "What did the $100 million accomplish? These teachers were already doing a good job."

While ineffective at improving student learning, these teacher merit pay ploys are more successful in achieving their real aims: to produce an American myth that unmotivated teachers are to blame for a broken school system in an effort to deflect attention away from systemic inequality. Consider:

-- The American Society of Civil Engineers' 2009 report card gave school infrastructure a "D" grade and estimates that $322 billion is needed for repairs.

Our school system today is more segregated than at any time since 1968.

Despite the findings of Tennessee's Project STAR that smaller class size is critical to student achievement, there is a steady increase in student-to-teacher ratios--robbing students of the individual attention they deserve and leading to teacher burnout.

This is being exacerbated across the country--despite federal education stimulus dollars--with news that Los Angeles schools are sending pink slips to 8,000 educators, that Charlotte, North Carolina schools have threatened to lay off every teacher with less than five years experience, and that Seattle Public Schools are closing or disrupting 13 schools, with layoffs to follow.

All of these social ills have a decisive impact on the learning process, and none can be solved by fomenting competition between teachers. Real education reform would start by addressing these systemic inequalities and acknowledging the miraculous work that my teacher colleges do every day despite the lack of institutional support.

It would mean giving teachers a respectable wage--we would, of course, be open to accepting President Obama's salary cap of $500,000 with unlimited access to stock options, which he recently set for incompetent CEOs who received public money to keep their failed institutions afloat.

Most importantly, real education reform would redirect society's wealth away from ruinous investments in credit default swaps, and toward a sure bet: our children.