How two vets took on KBR

Iraq Veterans Against the War member Bryan Hannah tells the story of how he and another vet made some county commissioners in Texas think twice before inking a road-building contract with a trio of fast-talking KBR executives.

TWO MEN and a woman in a suit with shiny brass buttons walked into the Hays County Courthouse in central Texas on March 24. They were there to sign a contract between Hays County and KBR, a former subsidiary of Halliburton and one of the corporations that has been a major war profiteer in Iraq.

The three executives sat patiently through the daily business of veterans' affairs, needs of the local police department, burn bans and drawing lines for a subdivision until it was their turn to discuss the $617,000 county contract that would make KBR a road builder in our community.

What they didn't count on were two unsatisfied customers and members of Iraq Veterans Against the War--Gregory Foster and myself.

Greg and I brought to the attention of the county commissioners the company's history of scandals, including bribery, the negligent homicide of 11 soldiers and five Marines, rape and gang rape cover-ups, tax evasion and more.

Greg read the top results for a Google search that contained a multitude of shady business dealings and crimes to demonstrate that the commissioners had not done adequate research. He then read a letter from Spec. Jude Prather, a Hays County resident and infantryman in Iraq. 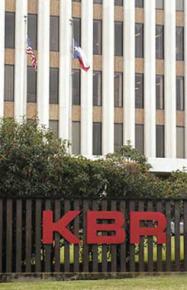 Jude's letter outlined his concerns about KBR being a daily fixture in his community, stating that his convoy escort team's opinions of KBR were "too colorful to be read in court." Greg recalled a saying of his father: "Son, your dollar votes. If you don't like how a company does business, don't do business with them."

I brought to the commissioners' attention the siphoning by KBR of tens of billions of dollars out of our treasury in exchange for the delivery of substandard service and even unacceptable "disservices" to U.S. troops in Iraq.

Some soldiers suffered illnesses from contaminated drinking water, others were exposed to carcinogens such as sodium dichromate, and some died as a result of faulty electrical wiring and air-conditioning units placed so close to showers that water splashed on them.

"Hays County has a laudable record of supporting its service members and veterans," I said. "I do not think we could in good conscience accept that reputation and hire a company responsible for killing U.S. soldiers and Marines, then attempting to cover it up and deny compensation to the families."

I also attested to how KBR fattened its bottom line by shipping empty trucks around Iraq--while putting soldiers and civilians lives on the line to escort them.

A KBR executive stepped up and boldly (as well as untruthfully) said that all of these allegations were totally untrue and that KBR was not for or against the war. But the judge presiding over the hearing interrupted her to ask if it was true that a KBR employee had been convicted of bribery, and she was compelled to say that a KBR executive is indeed in federal prison for bribing Nigerian officials for $60 million in contracts.

She then tried to discredit me, Greg and our supporters by noting our antiwar attire, but she was forced to show respect for our service in the military and acknowledge our direct experiences with KBR.

In the same breath that she denied KBR profiting from the Iraq war, she also said that KBR wasn't the only corporation to profit from the war effort. She added that the employees who committed the crimes were just "a few bad apples."

I had no choice but to apologize. "I didn't mean to pick on your poor, innocent, multibillion-dollar corporation," I said, adding that if any of the other war profiteers tried to do business in Hays County, I would speak against them as well.

Her claim that actions of KBR employees don't reflect company policy in any way was simply absurd.

After our testimony, the commissioners and the judge moved to postpone a final decision until March 31 in order to conduct more research, and there was a lot of talk about why other companies hadn't been considered. Of the four commissioners and one judge responsible for the decision on the contract, only one made a comment in defense of KBR. "The Brown family seems very nice," said the official.

It seems likely that we succeeded in blocking KBR from getting this contract. Let this serve as a lesson that people have power, and we should not make the mistake of disempowering ourselves by believing we are powerless. Get out and be heard!