Party of the (rich) people

The Democrats are making the running to be big capital's favorite political party again.

IT ISN'T just SocialistWorker.org that called attention to the double standard the Obama administration is using to ladle out huge sums to Wall Street while threatening auto companies with bankruptcy. Or how it is straining to tamp down calls for limits on bankers' bonuses while forcing union autoworkers to take huge concessions.

In an article headlined "Carrots for banks, sticks for autos," the Politico wrote: "Critics of President Obama's do-or-die plan for General Motors and Chrysler are making this a fight over fairness: Why do banks get carrots and the autos get the heavy stick? It's a fair question, and one likely to resonate with those who feel Obama has gone light on insurance giant AIG and bailed-out banks like Citigroup."

In Michigan, the state hardest-hit by the auto industry's collapse--and whose union households voted for Obama at a 2 to 1 rate over Republican John McCain last November--the disparate treatment is a slap in the face. As Brian Fredline, president of UAW Local 602 near Lansing, Mich., told the Associated Press:

It's the age-old Wall Street vs. Main Street smackdown again. You have all kinds of funding available to banks that are apparently too big to fail, but they're also too big to be responsible...But when it comes to auto manufacturing and middle-class jobs and people that don't matter on Wall Street, there are certainly different standards that we have to meet--higher standards--than the financials. That is a double standard that exists, and it's unfair.

The double standard is clear to see. Yet it would seem to contradict the notion, traditionally held in civics textbooks and popular lore, that the Democrats represent the "people" while the Republicans represent big business. With unionized workers being an important group in the Democratic "base," it would seem that Democrats are acting against their own best interests.

This conception assumes that the Democrats simply reflect the interests and aspirations of the people who vote for them. But this is actually the wrong way to look at the real Democratic Party, which is one of the two corporate parties that manage the American state. 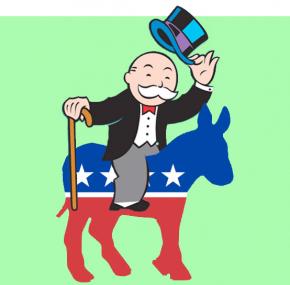 Just take a look at the most recently available figures on the financing of the 2008 election from the Center for Responsive Politics. The leading industrial sector in providing money for Democratic candidates at all levels was the finance, insurance and real-estate sector, contributing more than a quarter of a billion dollars.

The Democrats received a bare majority (51 percent) of the total amount of money this sector spent on politicians in 2008, but it was the first time Wall Street spent more on Democrats than on Republicans since the early 1990s. Time will tell whether this will be a sustainable trend, but the Democrats are making the running to be big capital's favorite again.

ACCORDING TO political scientists Thomas Ferguson and Joel Rogers, the Democrats emerged from the Great Depression as the favored party of a section of business--what Ferguson and Rogers called a "multinational bloc" of capital intensive, export-oriented industries (including auto).

This configuration of business political support lasted until the mid-1970s recession upended it, which led to the neoliberal era that gave the Republicans the upper hand as business's champions.

Hear Lance Selfa at Socialism 2009 in Chicago and San Francisco, speaking on "Class Traitor or Capitalism's Savior? Roosevelt and the New Deal." Check out the Socialism 2009 Web site for more details. See you at Socialism!

In the neoliberal era, the finance industry displaced manufacturing as a chief driver of capitalist profits. By 2006, profits from the finance accounted for more than 20 percent of all profits, compared to 12 percent coming from manufacturing--a reversal of their respective contributions to the mass of profits in 1980, according to analyst Kevin Phillips.

Since the days of the Clinton ascendancy of the 1990s, the Democratic Party has positioned itself to take advantage of this shift in the composition of American business. After reviewing campaign finance data from the 2000 presidential election, socialist writer Mike Davis drew a balance sheet of what "materially grounds partisan difference in the early 21st century":

The Republicans...remain solidly grounded in the Old Economy sectors: indeed, the [George W.] Bush administration is virtually an executive committee of the energy, construction and defense industries. On the other hand, the Democrats, primarily in the Clinton/Rubin years, have made spectacular gains in the New Economy. Meanwhile, Wall Street old money veers Republican while the new money is marginally Democratic. The health care sector, which favored Clinton in 1992, remains a competitive terrain for Democratic fund-raisers.

Seen from this vantage point, Obama's and the Democrats' genuflections to Wall Street are easier to understand.

With the finance, insurance and real-estate industries supplying almost 70 times the amount of money for the Democrats' presidential race than organized labor, Wall Street is a far larger part of the Democratic fund-raising base than is labor. So Obama and his advisers, like Treasury Secretary Timothy Geithner and chief economic adviser Larry Summers, are going to be much more open to pleadings from Big Finance than they are to demands from "Big Labor."

The contrast between the auto industry's flagging influence and the still-strong hold of Wall Street on the Democrats is clear to see from another example. For decades, Rep. John Dingell of Michigan almost single-handedly held off calls for Detroit to raise its fuel efficiency standards. That ended this year, when Rep. Henry Waxman from California managed to dislodge Dingell from chairmanship of the House Energy and Commerce Committee, and announced that he would seek legislation to increase fuel efficiency.

But while Detroit lost its longtime protector in Dingell, Wall Street can rely on the likes Sen. Charles Schumer of New York to defend its parochial interests. Schumer regularly leads the fight to protect the unconscionable loophole in the tax code that allows the hedge fund managers' millions in compensation to be taxed at the rate of middle-income workers.

STILL, IT would be misleading to conclude that the Democrats simply represent one section or coalition of business, while Republicans represent another.

The operation of the two-party system assures that these divisions within American business are ad hoc and don't congeal into permanent ideological camps. Business must learn to operate within the U.S. federal system, which means that industries that may be big Republican donors at the presidential level may also support local Democratic political machines.

Secondly, corporations like to increase their bargaining power. They want to get as much as they can from their political involvement, and it helps them to be able to play one party off the other.

Finally, corporations seeking government favors subscribe to "lesser evilism" as much as voters do. The congressional majority party, which for decades was (and, today, is) the Democratic Party, usually is assured the majority of campaign finance contributions as well. Since its politicians will be in positions of authority in Congress, with the power to advance legislation, business will contribute to the majority in order to maintain "access" to its congressional leaders.

What does Corporate America expect for its investment? In total, the 2008 federal candidates to the House, Senate and White House raised $3.2 billion, according to the Center for Responsive Politics. While this seems like a staggering sum, it is equivalent to the size of an average "mid-cap" company. When Microsoft tycoon Bill Gates is worth more than $50 billion, the cost of the buying the Oval Office appears to be a bargain.

In 2008, Goldman Sachs executives donated $6.9 million, 74 percent of it to Democrats. Citigroup executives gave $5.5 million, 61 percent of it to Democrats. Considering that Goldman has received almost $23 billion or more from the federal treasury since October and that Citigroup has received a federal guarantee against $300 billion in losses, that's a return on their investment that any Wall Streeter would envy.