What happened to prison education programs?

Why have college education programs in prison--proven statistically to have a positive impact on recidivism--all but disappeared, asks Marlene Martin, national director of the Campaign to End the Death Penalty.

THE 1960s were turbulent years; social change was in the air. Jim Crow segregation was dismantled, and the civil rights movement brought questions of racial and social justice into every household--and also into every prison. As people sought to change society on the outside, so did prisoners on the inside.

The Attica prison uprising is the best-known and most dramatic attempt by prisoners to change their conditions for the better.

In 1971, the prisoners took over Attica, calling for both political and practical changes. Their demands included allowing prisoners to be politically active and free to adhere to any religion. Practical demands included the ability of prisoners to see a doctor if they were ill, the allotment of more than one toilet roll a month, and more access to education and true rehabilitative programs.

While the Attica uprising was put down by state police, the cry for prison reform was heard. Prior to Attica, prison educational programs were paltry. But because of the uprising and the continued organizing of prisoners afterward, these programs expanded dramatically. 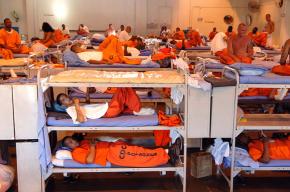 In 1965, Congress passed legislation allowing prisoners to apply for Pell grants to pay for their education. The total amount of Pell grants awarded to prisoners was 0.1 percent of the total given under the Pell grant program. But it was enough to sustain college education programs in 90 percent of states.

The value of secondary education programs in prison has been proven time and time again by studies. It is borne out most dramatically in statistics on recidivism. As a report compiled by Daniel Karpowiz and Max Kenner, titled "Education as crime prevention; the case for reinstating Pell Grant Eligibility," finds, "Postsecondary education is the most successful and cost-effective method of preventing crime."

GIVEN THESE positive outcomes, you would think that support for prison education programs would go on growing. Instead, in 1994, President Bill Clinton signed legislation denying Pell grant money for prisoners' education. Immediately, programs began to shut down; they are now all but gone. (A few have made a comeback recently, but largely on a voluntary basis.)

Why would the federal government cut back on programs that clearly work?

This question cannot be answered without taking into account the shift that has taken place in prison policy since the early 1970s.

With the retreat of the movements of the 1960s, the government's approach to prisons and prisoners was pulled in a more conservative direction, like other social policies. The idea that it should be a concern of society to help prisoners better themselves disappeared; instead, prison became a place where people were thrown away to pay for their crimes.

As Paul Wright, a former prisoner, author and the editor of Prison Legal News, explained, "There has been a political decision made by legislators and the executive branch--they want a permanent underclass.

"These things don't happen on their own. They need help from above, and prison and education is a perfect example. Every study that's been done on the subject of prison education going back at least 80 years, and probably before, shows that the more education people in prison get, the lower the recidivism rates."

And because secondary education is a commodity in the U.S., unlike most industrialized countries, Wright says legislators will ask why prisoners should get a college education for free when everybody else has to pay for it. "And that's a good question," he says. "Why can't people who aren't in prison get a free education--which in most industrialized capitalist countries is deemed a right of citizenship?"

Wright contends that the lack of educational programs for prisoners is just one example showing the real direction of current prison policies.

"Setting prisons in rural areas far from the urban centers that generate most prisoners; cutting off contacts with the community and family support networks; denying contacts with families through exorbitant prices for phone calls; draconian visiting policies--these are things you would do if your goal is to create an alienated, isolated non-functional underclass of people who cannot ever be reintegrated into society," he says. "And that's what we have in this country."

The tough-on-crime era of the 1970s and after ushered in a host of measures that supported the framework of a harsher, more punitive approach to prisoners. One example was the return of the death penalty in mid-1970s, after a brief moratorium imposed by the Supreme Court.

The same attitude continued with the introduction of life-without-parole sentences, which now exist in every state except Alaska. Mandatory minimum sentencing, three-strikes-and-you're-out sentencing laws, juveniles being tried as adults--all of these were part of the trend.

Amid all this, the defunding of education program for prisoners was a less noticed, but related, change.

BRINGING BACK college educational programs for prisoners and making money available for them is only one piece of many to address our broken criminal justice system. For example, mental health care and substance abuse programs are desperately needed.

So in the fight for more and better programs, and in challenging the death penalty and other harsh punishments, we should also be arguing for a more humane approach overall to our prison work--and not fall into any false ideas that more cops or longer and harsher sentences are going to make us safe. As Angela Davis says, "We have to move from a society that is grounded in vengeance to a society that is grounded in justice."

Society offers very little to those in prison, and even less when prisoners get out. For example, Darrell Cannon--a victim of the Chicago police torturers operating under Jon Burge, who spent 24 years locked up in prison, nine of them in solitary confinement, for a crime he didn't commit--was offered no help at all when he was finally freed. He explains that former prisoners are set up to fail.

Of course, because of racism, it is that much harder for African Americans who have been to prison to make it on the outside. Studies show that a white person with a criminal record is more likely to be hired for a job than an African American without a record.

Webb's commission would look at wrong-headed policies that have resulted in the U.S. having the largest prison population in the world--including unfair sentencing policies, the incidence of mental illness in prison, and the lack of programs to help inmates re-enter society.

This is a welcome change in the previously united attitude of legislators, who have for far too long gone along with a criminal justice system that has destroyed countless lives.

There are other indications that change is afoot--from the abolition of the death penalty in New Mexico earlier this year, to Rep. Maxine Waters proposal to do away with mandatory minimums, to the reform of the decades-old Rockefeller Drug Laws in New York.

Some of the impetus for these changes undoubtedly comes from the budget crisis. States and the federal governments are desperate to cut expensive programs, and that's exactly what our prison-industrial complex has become.

But they are also an indication of an emerging progressive attitude in the Obama era--one that is beginning to question the "vengeance" approach to prison, not only because it is so costly, but also because it is so dramatically unfair, ineffective and racist.

What will be decisive in the coming period is whether or not we are able to mobilize our forces to press for these and other needed changes.

We have more than enough studies documenting the horrible conditions that exist in today's prisons. In 2003, for example, a Human Rights Watch report said that U.S. prisons have become a repository for the mentally ill. As many as 300,000 prisoners are mentally ill and lack treatment; they are abused by staff and confined in filthy cells.

We don't need more studies. We need change. And we need an organized voice of concerned people, working in conjunction with prisoners, to push for these changes publicly.

Like the Attica uprising and the civil rights movement showed us, this kind of organizing works. That's why the Campaign to End the Death Penalty aims to work with prisoners and their family members to not only build a movement that can challenge the death penalty, but one that can also push for more progressive changes in prison.

First published in the New Abolitionist.