The red badge of courage

Iraq war veteran Phil Aliff talks about the ways that war scrambles the moral compass of soldiers and frustrates their return to civilian life.

THERE ARE moments in every person's life that define who we are. These moments are like scars that we bear to show not only where we have been, but also receipts showing that we have paid our debt for being alive. Combat is one human experience that is guaranteed to change you.

While smoking a cigarette in my backyard, Jason said something so obvious, yet at the same time so profound. It helped me to contextualize the spectrum of emotions that I am faced with every day.

"I don't want to freak you out or anything, but you should be dead, man."

Of course, at face value, this is a response that anyone would have when faced with the reality that one has experienced combat. But stepping forward toward its logical conclusion, one can say that there are a lot of feelings involved with trying to figure out why you didn't die. I don't believe that I am alive today because some spiritual being had a greater plan for me. I don't believe that I am alive due to divine intervention.

As an infantryman in the United States Army, I have learned one simple truth. When your time is up, it's up. There are no second chances. There is no restart button. After searching for the answer to this question, I have realized that I am alive today simply because of a roadside bomb being buried too deep or inaccurate gunfire due to the person firing the weapon being just as scared as we were. I am not a hero because I lived. I am just lucky. 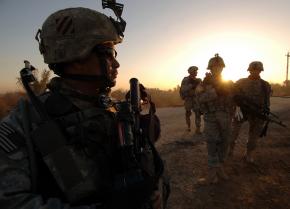 Staff Sgt. Lewis was not so lucky. I remember when they placed his body on the helicopter after he was mortally wounded by a bullet to the neck. As I watched through my night vision, I remember thinking to myself that I would carry this memory without remorse, because Lewis would not be able to carry it himself. His wife was in the military and deployed to Afghanistan when he died. It took them weeks to locate and notify her.

This firefight happened only moments after my platoon returned from a patrol that was disorienting and frustrating because we could not locate and kill the Iraqis who were ambushing us on an almost daily basis. When you cannot inflict casualties on the enemy, you learn that there are no limits to the level of human rage. It is the kind of rage that eats away at you. It is like a disease that tears you apart from the inside.

MILITARY VETERANS continue to carry this rage when we return home. When you are in Iraq, it is easy to justify shooting into a house or calling in mortars on a palm grove. But when you return home, you can't fire a machine gun at someone who cuts you off on the highway.

This feeling of vulnerability drives a veteran mad. We pack up our civility to prepare for combat. Everyone at home carries their socially accepted morals, while we throw them out the window to justify killing someone for nothing. We were taught how to pack our morals away, but we were never given directions for unpacking them.

Sometimes, I find myself driving in the middle of the road for fear of a bomb detonating underneath my feet. I have a hard time sitting in traffic because I am worried that a car bomb will detonate next to my vehicle. I get anxiety in large crowds because I am worried about getting shot at. The paranoia of returning home seems so out of place, but we will never be able to put the war behind us. We will never readjust to civilian life.

Sometimes, your shelter from the storm is the place where you feel the most vulnerable. The best place to deal with these feelings is during combat. You can understand it. And the most ironic part of post-traumatic stress is that veterans cannot enjoy the moments where Americans celebrate our freedom.

On July 4, the iconic image is sitting in a park and feverishly firing gigantic rockets into the air. These fireworks sound like the soundtrack to a military battle. When I hear fireworks, I hear bombs and automatic machine gun fire.

This is the foundation of post-traumatic stress. The U.S. government defines it as a disorder. In reality, coming home after witnessing or taking part in the killing of other human beings and being able to feel completely fine with it is a disorder. It is completely justifiable to not be able to sleep because you would wake up at 6 a.m. and see your whole platoon running to dodge mortar fire.

I think about all of this at least 1,000 times a day, and it makes me incredibly angry. I fought for a country that refuses to take care of us when we come home. When I realized that, it was the worst feeling. This is the true cost of war that you will not hear about in any State of the Union address or cable news report. If you go to any homeless shelter, unemployment office or VA hospital, you can ask someone who actually knows what they are talking about.

I am a combat veteran, and I am 23 years old. What the fuck.

As someone I served with once said, the point is not to support the troops, but to understand us. I cannot wrap myself in a yellow ribbon like a child's blanket when I feel scared or vulnerable. We must understand our dark past in order to build a brighter future. I don't want my children to experience firing a weapon in anger, having a bomb detonate next to their vehicle, or hearing the screams of someone who has been shot.

That is change I can believe in.