No answers from D.C. police

Clinton Clad-Johnson reports on the angry questioning of another killing by police in Washington, D.C.

ON JUNE 8, plainclothes officers on patrol in the Trinidad neighborhood of northeast Washington, D.C., killed Trey Joyner, shooting him multiple times in the back.

Trey Joyner will never get to tell his side of the story of what happened. And information seems to be as hard to get out of authorities.

At a community meeting in response to the slaying, Major Jeanne O'Toole of the U.S. Park Police told angry residents, "It's not taken lightly, that we take a life as a police agency. There's not a lot about the shooting that I can speak on." Lt. Paul Wingate of D.C. police homicide unit echoed that sentiment, saying, "There's things we can't divulge...You're just going to have to bear with us on this."

It seems like every time law enforcement commits some heinous act of violence, the citizens are left having to "bear with us on this."

Members of the community who gathered at the meeting after the killing to hear an explanation were understandingly livid with the lack of information about the loss of another life. 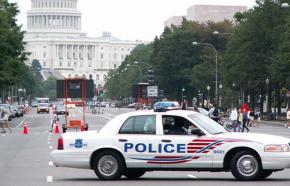 A schoolmate of Trey Joyner's, D'Angelo Alford, wondered why Trey was shot in the back, apparently running from police. "They're faking in there," he said as he left. Another man, Yusef Hampton, stayed at the meeting just five minutes, leaving because of the lack of information. "How long do you think the strong Black brothers are going to take this?" he said.

That's a good question that needs to be asked and answered--for Joyner's death at the hands of police is no isolated incident. Violence in this area's police departments is a well-documented affair--several are being monitored by the Justice Department.

Not even a week before the Joyner slaying, the chief prosecutor in Prince George's County, Md., across the border from D.C., announced that he didn't intend to press charges in the hanging death of Maryland inmate Ronnie White, which was ruled a homicide by the state coroner.

Almost two years have passed since the tragic death of 14-year-old DeOnte Rawlings. Rawlings was killed by off-duty officers who said they were trying to find a stolen mini-bike. The 5-foot-2-inch, 105-pound Rawlings was found shot in the back of the head, with unexplained cuts and bruises from apparent blunt-force trauma to his face, shoulder and back. The officers who killed him said they were fired upon, but no gun was ever found, and the cops at first fled the scene.

The time has come to say enough is enough. It shouldn't have to happen to our own family or friends for us to speak out when sworn defenders become such profane offenders.

Trey Joyner's family members were shaken up and looking for answers after the murder. His mother requested patience in dealing with police, but not everyone felt the same way. "We are questioning it," Trey's sister, Quston Joyner, said. "We saw his body. He was shot in the back several times." Trey's father, Walter Joyner, said the police "police executed my son. That's exactly what they did."

Though D.C. Police Chief Cathy Lanier says, "Our investigation has only just begun," it's painfully obvious that after we are done "bearing with them," this case will be another example of police officers being cleared of all charges.