Friends of the coup makers

Alan Maass reports on the powerful U.S. political figures who are fronting for the coup that toppled Manuel Zelaya in Honduras.

THE OFFICIAL position of the U.S. government is that it opposes the coup in Honduras that drove President Manuel Zelaya into forced exile over a month ago, and put in power the right-wing head of the congress, backed by the military.

But if Lanny Davis gets his way, that will change--and Davis has the friends in high places in Washington, D.C., to make it happen.

Davis is an American lawyer who is registered as a lobbyist for the Honduras branch of the Business Council of Latin America--the country's equivalent of the Chamber of Commerce, which has provided financial and political support to the coup government led by Roberto Micheletti.

Davis is pushing the same line that appears on the editorial page of the Wall Street Journal and comes out of the mouths of neo-con ideologues like John Bolton--that Zelaya broke the law, and Honduras' elite was only doing what it had to do to protect democracy when it sent armed soldiers to detain the country's elected president in the early morning hours of June 28, put the military on the streets to enforce "order," and cracked down against any show of support for Zelaya in the ensuing month. 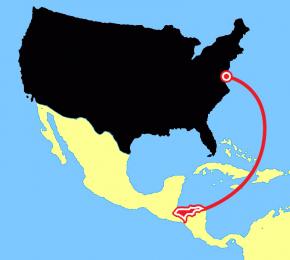 How exactly did Zelaya "break the law"? By organizing a non-binding national referendum on whether a constituent assembly should be convened to redraft Honduras' constitution.

Actually, Zelaya's real "crime" was to show independence from the Honduran oligarchy and military, and his toppling is the answer of an elite determined to regain its iron grip on power.

The coup makers are the inheritors of the death squad regime of the 1980s--down to the same murderers reappearing in positions of power--that helped the Reagan administration carry out its war on the left in Central America, especially the Sandinista government in Nicaragua.

And Lanny Davis is their front man in the U.S.

But he isn't from among the usual suspects on the Republican right. Davis is a Democrat--and a personal friend of Secretary of State Hillary Clinton, having served as Bill Clinton's White House counsel during his presidency.

Nor is Davis the only American with connections to the Obama administration from which the coup government might hope to get a hearing. Jeffrey Davidow, Obama's adviser at the Summit of the Americas, was a U.S. political observer in Chile during the 1973 coup against Salvador Allende. And Obama's ambassador to Honduras, Hugo Llorens, was in charge of the Andean region at the National Security Council during the failed U.S.-backed coup against Venezuela's Hugo Chávez in 2002.

Their influence may explain why the administration has been so lukewarm in its protests against the coup, why it has pressed Zelaya to negotiate with the men who toppled him in talks mediated by Costa Rican President Óscar Arias--and why Clinton called Zelaya "reckless" for his decision to try to re-enter Honduras from the Nicaraguan border to rally his supporters.

THAT BORDER confrontation began when Zelaya announced that he would return to Honduras by crossing the border on foot at Las Manos. Zelaya stepped onto Honduran soil briefly, but retreated back to Nicaragua when faced with a line of police with orders to arrest him.

Hundreds of Zelaya's supporters have heeded his call to join him on the Nicaraguan side of the border. Much larger numbers of Hondurans tried to march to Las Manos to meet Zelaya, but were turned away by the military, which set up a cordon five miles away to keep the border crossing isolated. Clashes between Zelaya supporters and the soldiers led to the army opening fire, killing at least one protester and injuring more.

The border standoff underlines both the determination of masses of Hondurans to resist the coup--and the lengths the coup makers will go to in order to stay in power.

Within hours of the first reports of Zelaya's ouster on June 28, thousands of people took to the streets in the capital of Tegucigalpa, gathering outside the president's residence. The mobilizations have continued since, led by unions and social movement organizations, and spreading from cities into the countryside.

Western press accounts suggest there are competing protests of equal size by pro- and anti-Zelaya forces, but reports from activists inside Honduras describe a much stronger movement behind Zelaya.

One member of SOA Watch--the antiwar group that targets the U.S. Army's notorious school for Latin American military officials at Fort Benning, Ga.--says a Honduran friend told him he had "never seen so much anger and passion" at demonstrations, and that the protesters' ranks extended beyond the traditional left to the social base of Zelaya's Liberal Party, one of the two mainstream political parties in Honduras.

These marchers are braving deadly repression. Over the weekend, another Zelaya supporter was killed at a protest--a teacher who was shot in the head as police charged a crowd of pro-Zelaya marchers, according to reports. There are also accounts of social movement leaders captured by the military, tortured and murdered--a grisly replay from the days of the death squads.

At the end of July, the Committee of Families of Disappeared-Detainees in Honduras, a nongovernmental human rights organization, released a report documenting more than 1,100 human-rights violations--arbitrary detentions, physical assaults, murders and attacks on the media by the government and affiliated clandestine forces--since the coup began.

Even more telling is the return of what one U.S. activist called the "dinosaurs from the old anti-communist national security state" of the 1980s. The activist described the most notorious example:

Fernando (aka "Billy") Joya, a former member of Honduras' infamous death squad, Battalion 316, who previously had fled the country on charges of, among other crimes, having kidnapped and tortured six university students in 1982, has resurfaced. He is now featured prominently on Honduran talk shows as an "international analyst" and "special advisor" to the regime.

Jose Luis Galdamez, a journalist for Radio Globo, whose station in the capital was raided by the military, stressed that coup apologists in the U.S. like Lanny Davis ought to be made to answer for the regime they are defending.

"Mr. Davis is either ignorant of Honduras, or is knowingly bloodying his name and that of the Clintons for lots of money," Galdamez, who has gone into hiding, told Roberto Lovato of the American Prospect. "I wish Mr. Davis would come here where I'm hiding so I can show him what it's like to feel threatened not just by Micheletti and the military, but by the [economic groups] he represents."

DAVIS' CASE for the coup makers depends on painting Zelaya as a dangerous radical--a "Chavist dictator" in the making, to quote the right-wing Accuracy in Media organization.

Zelaya is nothing of the sort. He comes from one of Honduras' wealthy landowning families, and ran for president as head of the Liberals, one of the two parties of the elite that have ruled the country for decades.

Since becoming president, however, Zelaya began to gravitate toward the example set by Hugo Chávez in Venezuela. Last year, he led the country into the Bolivarian Alternative for the Americas, a coalition of Latin American countries that includes Venezuela, Bolivia and Cuba. And recently, he pledged to institute agrarian reform and raise the minimum wage.

The oligarchs began to view Zelaya as a threat to their unchallenged rule in a country where 62 percent of the population lives in poverty and the average wage of workers in the free trade zones is 77 cents an hour--and the coup was their answer.

Predictably, the coup makers found support in the U.S. among a political establishment that has never been uncomfortable with dictatorships and military rule in their own backyard, so long as American interests are best served that way.

Davis is a part of that bipartisan establishment. But if he represents the wing that wants to back the coup openly, others in Washington want a different approach--based on a precedent from the Clinton administration in which Davis served.

In 1994, Bill Clinton sent U.S. troops to Haiti to restore the country's left-wing president Jean-Bertrand Aristide, who had been overthrown by the military in 1991. But Aristide was required to agree to tough conditions before the U.S. would act, including that he not run in new elections set only months after his return, and that he accept austerity policies dictated by the International Monetary Fund.

Obama administration officials may be trying the same tactics with Zelaya. This would explain U.S. half-measures toward the coup government--Obama ordered military aid to Honduras cut off, but has yet to carry through on threats to end economic aid, and Hillary Clinton's State Department is insisting that Zelaya agree to a plan brokered by Costa Rica's Óscar Arias that would return Zelaya to office, but bar him from running for president again.

Justice and democracy demand that Zelaya return to the presidency without any conditions or further pressure from the U.S. As writers and activists Clifton Ross and Marcy Rein wrote:

While it's crucial that the coup plotters be brought to justice (even if that includes U.S. citizens) and that Manuel Zelaya return to his rightful place as president of Honduras, activists need to pay even closer attention to the silent murder by economic strangulation and/or free trade agreements.

Those are different methods from Lanny Davis' open support of the coup makers--but are meant to accomplish the same goal of securing U.S. imperial interests in Central America.