A teenager’s diary of occupation

YOUTH IN America will gain a better understanding and a new vision about life in occupied Iraq with the publication of IraqiGirl: Diary of a Teenage Girl in Iraq.

Early in the occupation, Hadiya, a 14-year-old, began blogging from Mosul about her life. Hadiya's blogs, written in English with an American audience in mind, were later collected and published by Haymarket Books.

Teachers in the U.S. will find this book very useful in helping students understand and process issues regarding the occupation. Some of Hadiya's thoughts are universal among teenagers; other concerns stand in sharp contrast to those of her intended American audience. It's precisely this contrast that will help an American audience empathize with her challenges.

Her fretting over her grades on her French and English examinations, eagerness to play with her young niece, fighting with her sister, and posting of pictures of favorite things and people will be familiar to all. Her voice compels us to relate to her, and so her descriptions about life under occupation make it through the normal filters that we set up to protect ourselves from having to think about others' tragedies: 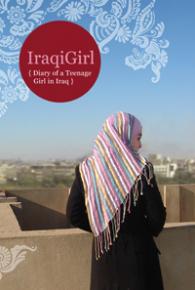 Today is like every other day in Iraq. No electricity, no fun and no peace. Just explosions, destruction and "accidental killings." Believe me, I haven't gone out of the house for a long time. But that's ok, there is good news. Maybe I can go to school next week...

Last night when I went to bed, I was thinking about the silent life that we lived before. No explosions! No bullets! How strange! Now we can sleep with loud sounds. They don't prevent us from sleeping because it has become normal. Something we hear all the time, like the sound of a bird.

IraqiGirl is full of witty humor and maturity beyond Hadiya's years. Her sense of humor is black and sarcastic, shaped by the events she deals with and her spirit of survival:

I told you before about the water in Baghdad--that there was none in the days that we were there. But I didn't tell you about the water we were drinking when it finally came out of the tap. I studied in school that water doesn't have a color, odor or taste. From my tap, I discovered I was wrong. So was I drinking water or something else?

Americans will also find the ethnic dynamics of Hadiya's story interesting. Mosul is a city with an ethnic diversity not unlike that of California. Hadiya's best friend is a Christian, and she describes how before the occupation, they lived "like sisters." But the war has brought on ethnic feuds and animosities that had been foreign to the Iraqi people.

WHAT CAN young people do to right grave injustices, to address problems that even adults can't solve? Hadiya grapples with the question of what to do when faced with a mighty force that steals the very freedoms fundamental to an adolescent's quest to establish herself:

Do you know that Aya's grandfather was killed last Thursday by one of the American soldiers' bullets? When Aya is eight years old and asks me how her grandfather died, what will I answer her? What do you think I should answer her? When I tell her the American soldiers killed him, of course, she will ask me why and how and what did I do about that?

The answer to her question is this post and the others. I can answer her that I did do something about it. I did what I could in that time. I wrote in my blog about what is going on in Iraq.

Like young people everywhere, communication for Hadiya is part of her quest to find meaning in the world. She is insightful and poetic:

Am I free and unrestrained
Or do I walk in chains?
Do I lead myself in this life
Or am I being led?
Am I the one who is walking on the road
Or this the road that is moving?
Or are we both standing still?
And is it time that is running?
I wish I knew but I don't know.

While many Americans may like to read a book filled with young and idealistic hope, the picture that Hadiya paints is quite complicated. She is a survivor, and as such, has been able to keep her hope intact. This book will provide the opportunity for her voice to be heard.

You need to laugh sometimes even if it is hard to.
I am not sad right now
But I am not happy.
I am not pessimistic,
I am not optimistic,
And I am not satisfied.
I don't feel anything
And I don't expect anything either.
I want to do something, and I don't know what it is.