No more waiting for crumbs

Sherry Wolf, author of Sexuality and Socialism: History, Politics and Theory of LGBT Liberation, makes the case for demonstrating in Washington at the National Equality March on October 11. Sherry is currently on a speaking tour of the East Coast.

THE NEWS this week that New York Rep. Jerry Nadler has proposed legislation to repeal the Clinton-era Defense of Marriage Act (DOMA) would have been sufficient to quell the demands of LGBT activists one year ago.

Today, Nadler's bill is a welcome step. But the fact that it comes seven months into the presidency of a man who promised to repeal DOMA--and amid comments from Democratic leaders like House Speaker Nancy Pelosi that getting rid of the federal anti-marriage equality law isn't a "priority"--highlights the molasses pace of LGBT rights legislation and the bankruptcy of the incrementalist strategy that has guided the LGBT movement for decades.

Like the moribund Equal Rights Amendment campaign for women's constitutional equality--initiated in 1923, reintroduced in 1972 and never passed by the required 38 states--LGBT gradualists have argued for a state-by-state legislative approach to winning change.

Enough begging for crumbs. If we want equal rights for LGBT people in all matters governed by civil law in all 50 states, we have to demand it from the federal government--and that means getting out and marching on October 11 in Washington, D.C.

That's what Generation Twitter and thousands of others--via Facebook, street heat and word of mouth--have been expressing in protests across the country since the passage last November of California's anti-equal marriage referendum Proposition 8.

President Barack Obama's own equivocation these last months shows the limitations of an electoral strategy--and the importance of struggle.

He is the first president to publicly utter the word transgender and to honor the anniversary of the 1969 Stonewall riots last June. Yet his Justice Department first insultingly upheld and then opposed DOMA. And Obama continues to drag his feet on repealing "don't ask, don't tell"--a policy that its own author, Gen. Colin Powell, calls for ending.

The relationship between LGBT activists and the Democratic Party has been a dysfunctional one. The Democrats court LGBT votes and money, but offer few gains and a fair share of abuse in exchange.

Notably, openly gay Rep. Barney Frank has refused to sign on to Nadler's DOMA repeal bill, saying, "It's not anything that's achievable in the near term." Frank, quite busy these days shoveling bailout money to the Wall Street bankers, was also instrumental in tossing transgender people out of proposed employment non-discrimination legislation in 2007. 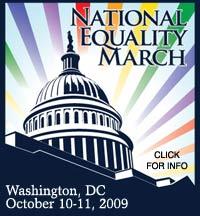 For LGBT activists wooed by the Democrats, ditching the more militant strategy that won a hearing in the first place for a "don't rock the boat" approach is the price to play.

Thirty-five years have passed since gay civil rights legislation was first proposed in Congress, yet LGBT people remain an unprotected class of citizens. Whereas the denial of the rights of gays to work for the federal government, for example, was enacted with the stroke of a president's pen in Executive Order 10450 in 1953, no such swift action has been taken to overturn decades of institutional discrimination.

When Bill Clinton was in the White House, it wasn't until nearly six years into his presidency that he Executive Order 11478, providing partial relief for lesbian and gay federal employees--not including 3 million military personnel.

But the fact that his action left intact sodomy laws (finally overturned by the Supreme Court in 2003), anti-same-sex marriage legislation (which he signed), the military's unequal status for LGBT people (which he introduced!), and never mentions the rights of those who are transgender, exposes the failure of the electoral route for winning civil rights for sexual minorities.

WE'VE GOT to strike while the iron's hot. Today, political tectonic plates are shifting rapidly, and groups and individuals need to get on board or step aside to let a new generation push ahead for full equality.

When Harvey Milk's protégé Cleve Jones put out the call for the National Equality March on Washington in October, almost every major LGBT group balked, arguing that there wasn't enough time, and a march wasn't the right strategy.

But the force of events and popular sentiment compelled organizations such as the Human Rights Campaign (HRC) to endorse this march. It's a positive sign that HRC feels the pressure to endorse--while grassroots activists shaping the march haven't watered down its demand for full equality now.

Unlike marches of the recent past, this one will not be brought to you by Miller Beer, Citibank or any other corporate entity. Its bare-bones budget is posted on its Web site, and celebrities like Cyndi Lauper and Lady Gaga are volunteering their services and paying their own way. It's grassroots all the way.

New activists are showing the way forward. When Black lesbians Aiyi'nah Ford and Torian Brown were kicked out of a Silver Springs, Md., diner for embracing, they called a protest in late August--and then got involved in building the march on Washington. A police raid on the Rainbow Lounge bar in Forth Worth, Texas--carried out on the night of the 40th anniversary of the Stonewall rebellion--sent patron Chad Gibson to the emergency room. Outraged LGBT folks called a protest--and now they're also building for the October 11 march. So are the local LGBT people in Atlanta, who responded with protests after an early September raid at the Eagle bar.

All of these actions have made international news and are forcing authorities to apologize and change policies.

Many transgender people, accustomed to being pushed into the shadows, have thrown themselves into building this march--from veteran Florida activist Donna Lee, who serves on the steering committee, to newer radicals like Dove Paige Anthony in Chicago's Join the Impact. Trans voices will be heard from the stage as well.

Whether the National Equality March draws tens of thousands or many more is hard to tell since so many established media outlets are ignoring it--though CNN, MSNBC and the LGBT cable network LOGO have agreed to give it exposure.

No matter how many turn out to march on October 11--or attend the vast array of workshops the day before--it will help punctuate a turning point for LGBT civil rights.

And a new network of activist groups will emerge from this march: Equality Across America. As Massachusetts activist Gary Lapon puts it, "We are not simply organizing to protest, but protesting to organize."

The new mood for LGBT equality is a reflection of a generation that grew up with unprecedented cultural exposure to sexual and gender variance, yet lives with draconian laws and organizational strategies that asphyxiate dynamism and shut down debate. No more crafting our demands to suit the tepid conservatism of a bygone era. We want it all!

President Obama, this is our Rosa Parks moment. When will you allow LGBT people sit at the front of the bus?