Pittsburgh cracks down for the G20

Eric Ruder reports on the legal obstacles and intimidating police presence that will face demonstrators at the G20 meeting in Pittsburgh.

IN THE weeks leading up to the Group of 20 economic summit of world leaders in Pittsburgh September 24 and 25, the mainstream media saturated the city with alarming stories of "violent" and "unruly" protesters.

But these stories also reassured residents that a slew of law enforcement agencies--local and state police, SWAT teams, the National Guard and the Secret Service--would ensure public order and protect private and public property throughout the city.

One question, however, didn't receive as much attention: who would protect the right to free speech?

Ahead of his arrival in Pittsburgh for the summit, President Barack Obama made it clear that he didn't value the opinions of protesters, anyway. "I was always a big believer...that focusing on concrete, local, immediate issues that have an impact on people's lives is what really makes a difference, and that having protests about abstractions [such] as global capitalism or something, generally, is not really going to make much of a difference," Obama said. 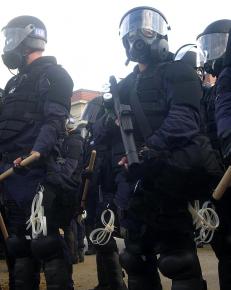 But if Obama thinks the demonstrations are irrelevant, his administration is going to great lengths to harass and intimidate them. The projected cost of the police presence--to include some 2,000 National Guard troops, 1,000 state troopers, 900 Pittsburgh police and perhaps thousands more police from nearby municipalities--is upward of $20 million.

The authorities will have helicopters, Humvees, prototypes of a new generation of top-of-the-line police cruisers--and specially outfitted police bicycles. "It ties in nicely with the whole green effort," said Chris Andrews, general manager of the military equipment contractor that donated the bikes.

Several buildings and sports fields belonging to the Pittsburgh public schools have been made available to law enforcement and military agencies to house personnel and provide landing pads for the helicopters.

But activists, on the other hand, have had to file numerous lawsuits to get city and state agencies to issue permits for peaceful protests and other activities. The city also put pressure on universities and other institutions to distance themselves from planned demonstrations, according to activists.

"I think that the city has been collaborating with the G20 to set up this summit, and I think they want to frustrate the efforts of those of us who want to voice our dissent," said Pete Shell, an activist with the Thomas Merton Center, a local peace group. "I've been an activist in Pittsburgh since the 1980s, and I've never seen the city locked down like this.

"We think that the people's voices need to be heard--the voices in opposition to the G20's policies that have caused economic and environmental crisis around the world. That's why we're organizing a peaceful, permitted people's march on September 25 that we're expecting thousands to attend from literally all around the world."

ON SEPTEMBER 18, a federal judge issued a ruling granting some of the protesters' requests for park areas for various encampments and other activities--while denying other requests, such as overnight camping and an endpoint for the September 25 People's March within sight and sound of the site where the G20 is being held.

"In our analysis, it was an important victory, but some of the key things we were asking for were lost," said Jonah McAllister-Erickson, one of the organizers of the People's March. "The permit fight really sidetracked our organizing efforts, and in some ways, the delaying and denial of the permits initially was enough of a denial of our civil liberties to dissuade some people from attending."

McAllister-Erickson said that all permit requests for use of a state park in downtown Pittsburgh were initially denied, but an application for a climate change event involving the steelworkers, State Sen. Jim Ferlo and Al Gore was reconsidered and eventually granted. But permits for other climate change activists, such as the Three Rivers Climate Convergence, weren't given similar consideration.

"The environmental message being put forward by Al Gore and the steelworkers in the Blue Green Alliance is a milder critique of the Obama administration's environmental policies, while the Three Rivers people represent a more radical edge of the environmental movement, which the city doesn't want to see during the G20," said McAllister-Erickson. "Gore's proposals for a carbon tax and sharing of carbon permits are more in line with the administration, while the Three Rivers' advocacy of real clean energy and moving away from fossil fuels is at odds with this."

As Socialist Worker went to press, some of the first demonstrations of the week had taken place, with 400 people attending a march for jobs called by Bail Out the People and another 400 taking to the streets with the G6 Billion, an interfaith coalition of pacifists.

Yet despite the pacifist character of these events, police mobilized an intimidating show of force--and even refused to abide by the march route and other terms of the permits issued by the city.

"If this is how they are reacting to relatively mild protests in an atmosphere that's not superheated by the presence of the G20 delegates and many days of activity, it foretells a lack of tolerance for constitutional rights on the part of the city and police, and sets a bad tone for the rest of the week."

Both Shell and McAllister-Erickson stressed, however, that thousands of people were still planning to exercise their constitutional rights and challenge the policies of the G20 on the streets of Pittsburgh.

On September 19, some 500 people attended a People's Summit to discuss issues of poverty, capitalism and globalization and to hear talks by global justice activist Walden Bello, antiwar activist Anthony Arnove and historian Howard Zinn, who addressed the meeting by video.

Obama may dismiss protests against "abstractions" like the vision of a different society, but activists in Pittsburgh think there's no better way to fight for change.

"The city is trying to tout the G20 as an endorsement of the same policies that have shipped good-paying jobs around the world, where people get paid $2 a day and live in deep poverty while it leaves parts of Pittsburgh a ghost town, such as the Monongahela Valley where the steel mills have been shuttered," said Shell.

"But we reject this, and we reject the city's attempts to stifle dissent and our First Amendment right to protest. We will not be silenced."